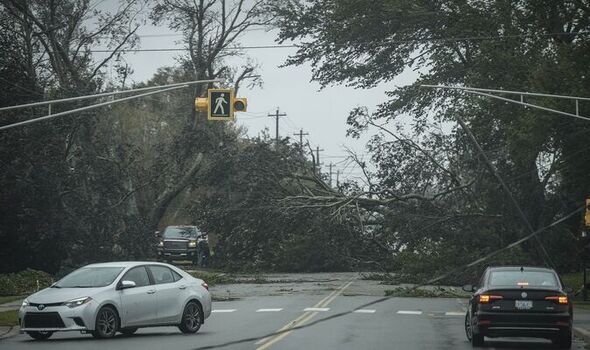 Thundery showers and icy galeforce gusts topping 50mph are predicted to hit parts of the country on Friday in unseasonably chilly weather. For some it will mean turning on heating for the first time in months.

They stretched from Essex through Norfolk to Yorkshire and Co Durham.

Yet despite the downpours Thames Water said their hosepipe ban covering 10 million customers in London and southern England would remain in place.

The company said “despite recent rain” there remained much less water in rivers than usual and the ban, which came into force on August 24, would remain in place “to make sure there’s enough water to go around”.

It added that “a lot more rain” was needed for water levels to return to normal. There are six other hosepipe bans in place in the UK, spanning areas including Hampshire, the Isle of Wight, Kent, Sussex, Cornwall, Devon, Greater London, Surrey, Gloucester, Wiltshire, Yorkshire,

Pembrokeshire and Carmarthenshire. Temperatures across the UK have already dropped as a low pressure front rolls in.

It will bring icy Arctic air in a situation forecasters say will be a “shock to the system” to people across the UK who enjoyed record-breaking summer heatwaves this year.

The floods – although expected to be minor – are among the first signs of the changing weather, which looks set to intensify as the week progresses.

Gales are anticipated over parts of Scotland, with Stornaway, Wick and Kirkwall in the Orkney Islands predicted to see gusts reaching almost 50mph on Friday morning.

On the south coast, Brighton will also be lashed with winds of 49mph. The worst of the weather is expected to roll in at 10pm.

The Met Office said it would remain fairly cool today with a mixture of sunshine and showers, continuing tomorrow, before the remains of Hurricane Fiona sweep in.

It wreaked havoc on Puerto Rico and the Dominican Republic before heading north to Canada’s east coast.

But he added: “This is nothing unusual for the time of year.”