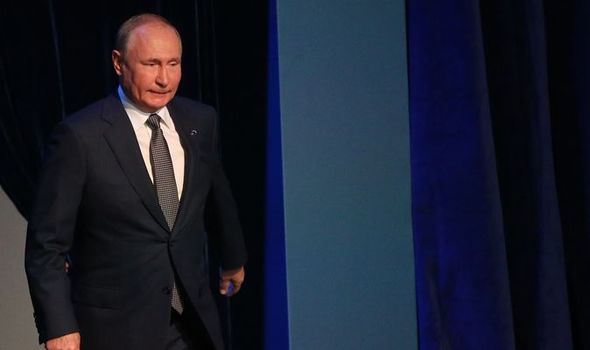 Lord Robertson says he has watched a fun-loving premier – who joked about his dog learning English – become a humourless leader determined to recover Russia’s lost glory. Recalling his time at the head of Nato, Lord Robertson also revealed it was his idea, and not America’s, to invoke Nato’s Article 5 after the 9/11 atrocities. It states that an attack on one member is an attack on all. He said the move still kept him awake at night – because if one member had refused it would have spelt disaster for the alliance.

Recalling his first meeting with Putin, he said: “Putin asked: ‘When are you going to invite us to join Nato?’ and he was being genuine. He was brand new as the leader of Russia and made it clear he wanted Russia to be part of Western Europe; to be part of that secure, stable, prosperous West that Russia was out of at that time.”

Creating the Nato-Russia Council also drew out Putin’s humorous side. “President Putin put his hand up, and I thought, ‘Oh, God. If he makes another speech, they’ll all want to make another speech.’

“He said, ‘Well, Mr Secretary General. I suggest that you should call the Nato headquarters the House of Councils.’

“Now, it sounds pretty ordinary, except that the Russian word for councils is soviets. So the translator was saying, ‘I propose you call the Nato headquarters the House of Soviets.

“I saw the Polish delegation shocked. So I took my gavel and said, ‘I declare that was a joke, and this meeting is closed.’

“In those days, he had a sense of humour. When I gave him a gift of an English language book, he said: ‘I practise my English by reading English books out loud, so my dog is now a perfect English speaker.’

“There’s no sign of any humour from Vladimir Putin these days.”

He added: “I found him to be a complex individual who was determined he was going to recover his country’s status in the world. And I think that’s what he’s still trying to do.

“He’s trying to get attention, and doing it in as many devious ways as he can imagine.

“He has conjured up a fiction that the West is determined to take over Russia, to belittle the Russian Federation. And there is no such objective at all. Maybe we don’t say that often enough. Maybe we should be repeating it constantly, and that might help with the general relationship in the future.”

Putin was a relatively inexperienced president when the 9/11 attacks took place.

Lord Robertson told the One Decision podcast that Putin was a willing partner ready to help. He said: “Russia was very much on side. The first telephone call, I think, that went to President Bush came from the Kremlin, to say, ‘We’re in absolute solidarity with you, and will help you in every way.’

“Of course, Russia itself was facing enormous restiveness from domestic terrorists at that time.

“So the sympathy with America was genuine. Russia, in the early stages of Afghanistan, was extremely helpful to the Alliance and to the Americans, offering the use of their bases and supplying fuel.”

His most worrying memory, however, was the Article 5 decision after 9/11. The secretary general had been hosting a Nato meeting of foreign ministers in Brussels that Tuesday.

“When a second plane hit we knew something dramatic had happened. We abandoned lunch, got into our cars, drove back to Nato HQ, and watched our TVs.

“At that point I recognised we weren’t just spectators, we were in the military HQ of the world’s most successful alliance.”

He added: “If, a week before, there had been a table talk exercise debating whether or not Article 5 would be invoked for a terrorist act, the conclusion probably would’ve been no.

“Article 5 was designed for an attack by the Soviet Union. Yet, America was under attack and we had to start thinking about the nature of what this meant for the military alliance. I decided that we had to take the gamble.”