On Saturday, October 8, at 6am, a huge explosion hit a bridge linking Russia and Crimea. So far, three people have been killed as a result of the incident, according to Russia’s Investigative Committee. Russia’s RIA state news agency said it was caused by a fuel tank on fire, however, this has been refuted by various sources. The explosion has been described as a “huge victory” for Ukraine by a defence and security analyst as the bridge was a vital supply route for Vladimir Putin’s southern army in Ukraine.

In videos of the explosion, cars and vans cross the road bridge which runs adjacent to the railway line.

As the vehicles cross, the bridge is suddenly engulfed in huge billows of smoke and flames. While the road was badly destroyed, as parts of it fell in the water below, the damage done to the railway was not as significant.

Russia claims a fuel tank caught on fire and caused the explosion, but defence and security analyst Michael Clarke has said this is “ridiculous” because a vehicle could not have done that much damage, especially as bridges are designed to withstand that sort of incident.

Instead, Mr Clarke speculated that it was either caused by a missile – heavier than that which Ukraine is supposed to have in its arsenal – or by explosives of some “magnitude” put underneath the bridge by Special Operations Forces. 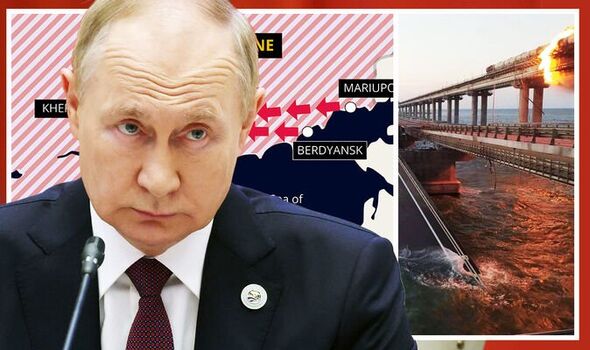 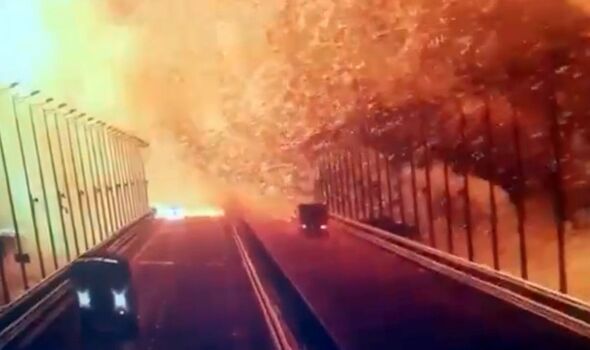 He added if this was the case, it is a “huge victory” for Ukraine as it is “in the middle of an area that the Russians are guarding very carefully”.

Mr Clarke said it was as big a blow to Russia as when the Black Sea Fleet flagship sank on April 14 after it was struck by Ukrainian anti-ship missiles.

The bridge, known as the Crimean Bridge or Kerch Bridge, is made up of a parallel road and railway and was built by Putin in 2018 after the illegal annexation of Crimea.

Prior to it being built, Russia would take supplies to Crimea via a ferry which took two hours. 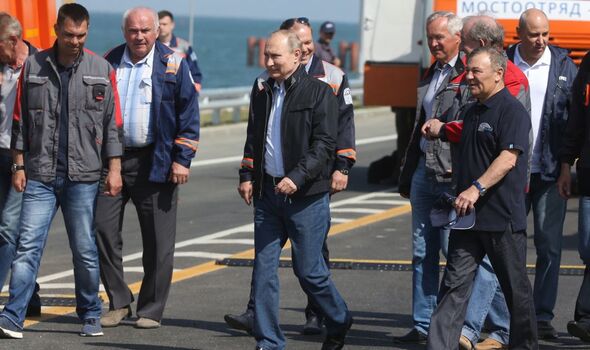 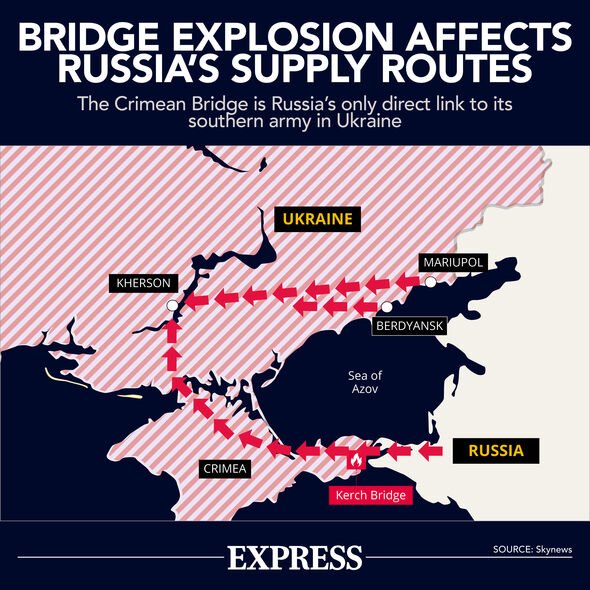 The Crimean Bridge is the only link between Russia and Crimea and the sole way Russia could take supplies directly. Not only this, but it was this route that the Russians used to take artillery through Crimea to the Kherson region.

Now, Russia has to travel by sea to Mariupol and Berdyansk before travelling by train to reach Kherson.

However, taking this route will mean coming within close proximity – approximately 20 miles – of Ukrainian artillery. The Kerch Bridge being out of use will therefore affect Russian supply lines “in quite a big way”, Mr Clarke explained.

According to Russian Railways, traffic on the bridge has been suspended and trains are not departing temporarily with ticket sales also suspended. 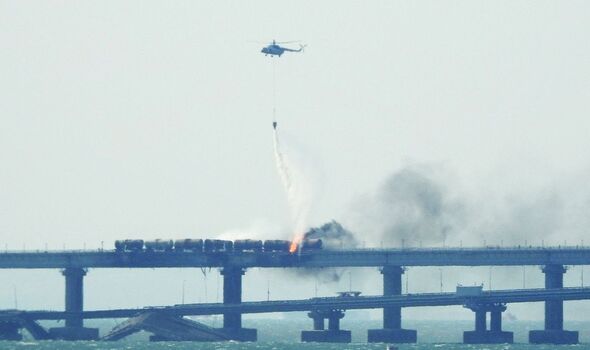 Euromaidan Press also reported that according to Yandex.Maps the bridge will be blocked until October 31.

But Mr Clarke warned the Russians will repair the bridge quickly with the damage done giving the Ukrainians a two-week advantage.

He continued: “If they hit the rail bridge more strongly than they obviously did then that will be better for them, but to bring the road bridge down is a tremendous achievement and to damage, the rail bridge is still pretty good…

“Russians will now find it difficult to get any more equipment into the Kherson region where they are already in trouble.”