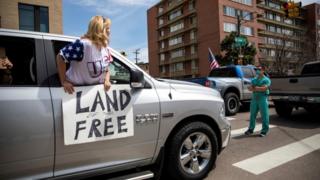 People protesting against the stay-at-home orders in Colorado were confronted by a man and woman dressed in medical uniforms – apparently issuing a silent rebuke to participants.

Photos of the pair grabbed headlines and were widely shared.

Now the the photojournalist behind the viral images, tells the BBC what happened that day when “two worlds collided” over the shutdowns.

Some states are reopening businesses amid warnings infections can spread.

Protestors agitating against state wide shutdown orders gathered in Arizona, Washington, Montana and Colorado over the weekend, trailing earlier gatherings in half a dozen US states.

Freelance photojournalist Alyson McClaran planned to capture Denver’s protest, where hundreds of people had descended upon the state capitol building to demand an economic reopening.

Protesters in cars honked their horns and clogged streets, while roughly 200 people assembled on the lawn, brandishing signs and American flags.

“There were a lot of people there not wearing masks, not social distancing,” Ms McClaran said of the “overly crowded” protests. “So I decided to leave and capture another part of the city.”

They “stood their ground”, Ms McClaran said, even as some demonstrators shouted and hurled racist comments at the pair.

“It was honestly heartbreaking to see,” she said. “It just felt like it was two worlds colliding.”

Who are the protesters?

Though some states – including Georgia, Tennessee and South Carolina – have made moves to reopen, most of the country remains under some version of a stay-at-home order. Those protesting say that the strict measures restricting movement and businesses are an overreaction to Covid-19 and unnecessarily hurt citizens.

Some of those demonstrating argue that keeping social distancing restrictions in place much longer will cause irreparable damage to local economies, as more than 20 million Americans have made jobless claims in the past four weeks alone.

Some argue that civil liberties have been infringed by efforts to curb the virus spread, and many repeat President Donald Trump’s caution that the cure cannot be worse than the disease itself.

But as confirmed cases in the US top 788,000 and the death toll rises above 42,000, public health experts and many state leaders have urged for continued social distancing to help minimise the virus spread.