EAST HAMPTON, N.Y. — Ina Garten’s house, on a side street in the stately, manicured village of East Hampton, was just the way you’d want it to be on a sunny morning in October. By which I mean the lawn was a beautiful rumpled green, and the garden was full of cherry tomatoes, and she was wearing a loose button-down shirt and smiling as she brought me coffee in a hotel-style silver carafe. All appeared just as it does on her television show, “Barefoot Contessa,” that has been shot here since 2002.

And I was there this fall because of a sneaking suspicion that, although Ms. Garten — Ina to her fans — has become a queen of quarantine cuisine, we don’t exactly cook from the same pantry.

For a person who’d been enclosed in a New York City apartment for seven months, with one end of the kitchen table functioning as my office and the other end as dining room, wandering through her “barn” — a lofty kitchen with two dishwashers and 25 feet of limestone counter space; a sunlit reading room full of cookbooks and couches; a spotless, roomy storeroom lined with fully organized staples — was like floating in a soothing dream.

The Contessa’s quarantine is not our quarantine. Her kitchen is not our kitchen. But this year, her Thanksgiving is pretty much our Thanksgiving: tiny and improvised, without the guardrails of tradition we usually rely on for a holiday dinner. 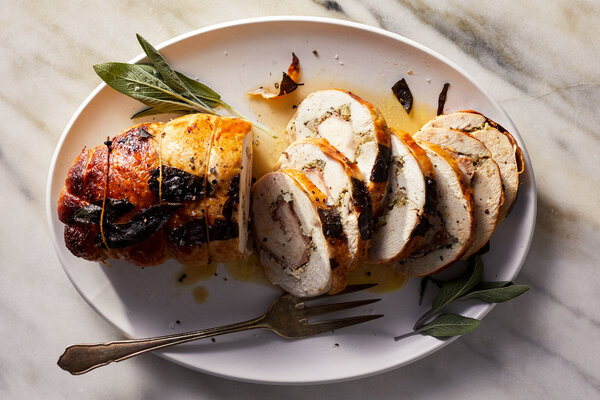 That could mean her recipe for roasted turkey breast infused with the flavors of Italian porchetta: garlic, fennel seed, sage and rosemary. The lemony mashed potatoes that she reverse-engineered from a restaurant dish that caught her fancy in Paris. In any case, she will be sticking with her perennial no-stuffing policy, making a savory bread pudding instead.

“I hope people will give themselves permission to do whatever they want this year,” she said.

Ms. Garten, 72, has published 12 cookbooks in 18 years, produced 18 seasons of her show on Food Network, and steadily built up a following that puts her among the most popular culinary figures of the last two decades.

Her official fan club’s page on Facebook is not a group that just anyone can join. First, supplicants must make it clear that they are part of the Ina personality cult by answering two key questions: What is the name of her husband, and what is the one herb that she cannot bear? If you replied “Jeffrey” and “cilantro” before even reading the questions to the end, congratulations. You, too, are an Ina superfan.

As a reporter, I have spent a lot of time over the same years wondering exactly how a wealthy white woman with no unique culinary skill or television shtick built such a diverse and devoted following. At her house, the answer was revealed in the first five minutes.

“I find cooking hard,” she said. “I’m not a trained chef. I love cooking, but it is not easy.”

It’s a simple truth, but shared by most home cooks. And that’s what she brings to the screen, combining the enthusiasm of a student and the authority of an expert.

If what you want from a cooking teacher are ways to get dinner on the table in 30 minutes while also exploring a global pantry, Ms. Garten is not your go-to television chef. If what you want is to cook food the way they do at the upscale bistro where you already spend your disposable income, she is very probably for you.

She adapted to the pandemic energetically, opening her freezer and pantry (via pictures on Instagram) and asking, “Does anyone have something they don’t know what to do with?” She has gained 1 million followers since March.

It was the first time she had invited regular contact with her fans, and she learned a lot. No one was actually using dried beans. Sourdough was over quickly. A recipe for Overnight Mac and Cheese crashed her website.

On April 1, she posted a video of herself making a Cosmopolitan cocktail that begins with a full liter of vodka and ends with her sipping out of a martini glass as tall as a garden gnome. More than three million people have watched it, embracing the larky side of her teaching persona.

“That was it for me, I was hooked,” said April Franklin, 26, a new follower who lives in Rockville, Md. “She’s like a mom, but I want to listen to her when she tells me what to do.”

“She looks like us,” said Deborah Torres, 61, a retired teacher in Tucson, Ariz., who is a longtime fan. “She knows what she’s good at, and she stays in her lane.”

There are some signatures to an Ina recipe. Her hybrids — like waffle-iron hash browns, cacio e pepe gougères and Caesar grilled fish — are successful not only because she thinks them up, but because she painstakingly makes them fit together.

She salts like a restaurant chef, and gives exact measurements instead of relying on the phrase “to taste” — usually a lot more of it than home cooks think they can, or should, use. She is lavish with fats: butter, heavy cream, pancetta, cheese, sometimes all of the above. Then she often slips in small hits of vinegar and citrus, to wake up the flavors. There is at least one recipe in each book for a piece of meat that will cost more than anything else on your table, including the silverware.

Trent Pheifer, a 35-year-old New Yorker, is five years (and 1,029 recipes) into a quest to cook all of Ms. Garten’s recipes, a project he documents on Instagram at @storeboughtisfine (a phrase that Ms. Garten uses often, especially about chicken stock). He said that like many people his age, he tried learning how to cook from randomly chosen recipes on the internet, only to realize he didn’t have the basic kitchen skills to follow them.

“What does ‘brown around the edges’ mean? How do you take something out ‘just before it’s done’?” he said. “How do I trust my gut when I have no history in the kitchen?”

Instead, he decided to trust Ina.

Having made most of them, he has learned that the recipes always work if you follow them closely, and that when they are not simple, the extra steps are worth it. He said the feeling of mastery her recipes provide is what makes Ms. Garten so popular with inexperienced cooks.

“I would not have dreamed that I — or anyone, really — could make Baked Alaska or carnitas at home,” he said.

Her first book, “The Barefoot Contessa Cookbook,” published in 1999, is a culinary time capsule, preserving the recipes from Barefoot Contessa, the food store she ran in the Hamptons from 1978 to 1996, when the neighborhood was still a place to escape urban hassles like parking tickets and dress codes. Paul McCartney or Annie Leibovitz might stop to pick up sandwiches on the way to the beach, or post-aerobics class for iced coffee and banana crunch muffins.

Some items on the Thanksgiving shopping list are obvious, but there are several other ingredients that will prove invaluable to have on hand. See our full guide on How To Cook and Plan Thanksgiving and our list of staples below.