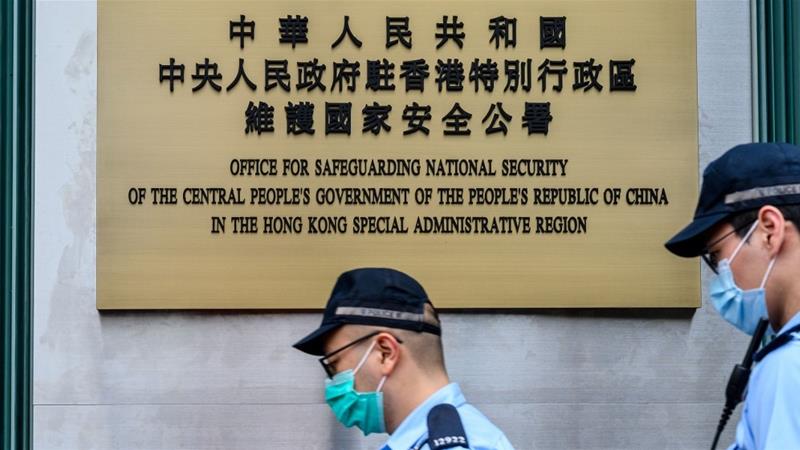 China has opened an office to “safeguard national security” in Hong Kong, turning a hotel near a hotspot for pro-democracy protests and the annual vigil marking the 1989 Tiananmen Square crackdown into its new headquarters.

Carrie Lam, the chief executive of Hong Kong, called the inauguration on Wednesday of the Office of Safeguarding National Security in the Hong Kong Special Administrative Region an “historic moment” for the semi-autonomous city.

Speaking at a ceremony at the former Metropark Hotel, Lam said Hong Kong residents “are witnessing another milestone in the establishment of a sound legal system and enforcement mechanism for maintaining national security in Hong Kong”.

The office, in the bustling shopping and commercial district of Causeway Bay, near Victoria Park, will allow Chinese intelligence agents to operate openly in Hong Kong for the first time since the 1997 handover and oversee the enactment of the sweeping national security legislation that was imposed on the city last week. 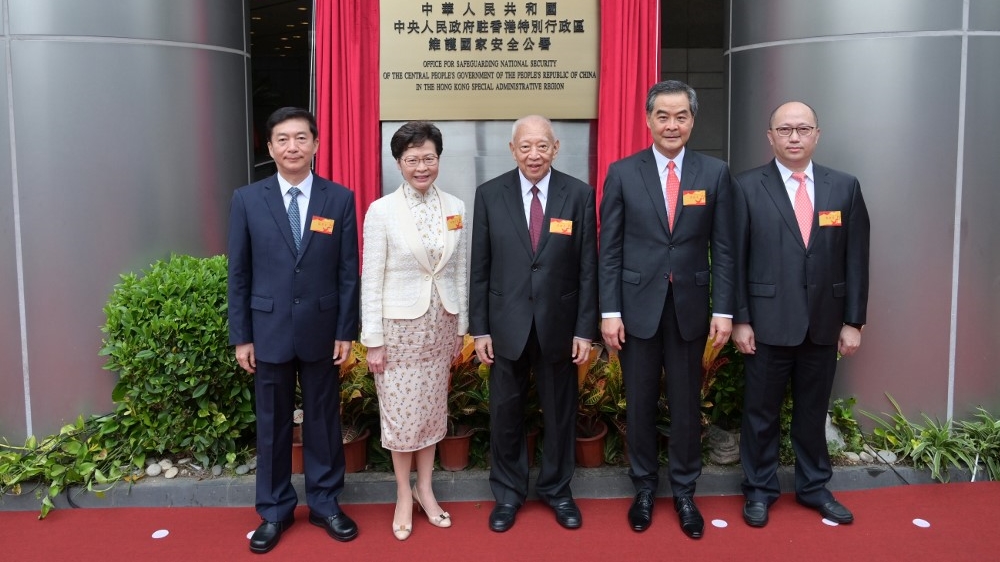 The law – which bans what China calls secession, subversion, terrorism and collusion with foreign forces – empowers the office to take enforcement action in the most serious cases. It also allows agents to take suspects across the border for trials in Communist Party-controlled courts and specifies special privileges for Chinese agents, including that Hong Kong authorities cannot inspect their vehicles.

As the new bureau was opened, officials said school students would be banned from singing “Glory to Hong Kong”, the protest movement’s unofficial anthem, as well as any other songs with political messages. Secretary for Education Kevin Yeung told lawmakers students should also not take part in class boycotts, organise human chains or chant slogans.

Zheng Yanxiong, the newly appointed chief of the office, and Luo Huining, the head of China’s Liaison Office in the city – Beijing’s top representative office – attended the opening ceremony.

Luo said the new office was an “envoy for safeguarding Hong Kong” and “the gatekeeper of national security” in the city.

“Those with ulterior motives and who are anti-China and seek to destabilise Hong Kong have not only stigmatised the office, but also smeared the legal system and rule of law in the Chinese mainland in an attempt to stir up unnecessary worries and fears among Hong Kong residents,” he added.

Zheng said the office would enforce the law strictly “without infringing on the legitimate rights and interests of any individual or organisation”.

A Communist Party hardliner and a speaker of Hong Kong’s Cantonese dialect, Zheng became prominent during a clampdown on land rights protesters in a village across the border in neighbouring Guangdong province.

Leaked footage during the 2011 dispute showed him berating villagers of Wukan and calling foreign media “rotten”.

Zheng, who most recently served as secretary-general of the Communist Party committee of Guangdong, has never held a post outside Guangdong. He worked at the Communist Party’s official People’s Daily in its southern regional bureau for four years and was vice minister in charge of propaganda for Guangdong from 2013 to 2018.

The national security law marks the most radical shift in Hong Kong’s governance since the United Kingdom returned the city to China in 1997, under the “one country, two systems” formula that assured the city autonomy and freedoms unknown on the mainland.

Lam’s government on Monday granted police sweeping new powers under the new law, including the authority to intercept communications, conduct searches without a warrant and stop people from leaving Hong Kong.

Critics fear it will crush the territory’s freedoms, while supporters say it will bring stability after a year of sometimes violent protests calling for more democracy. 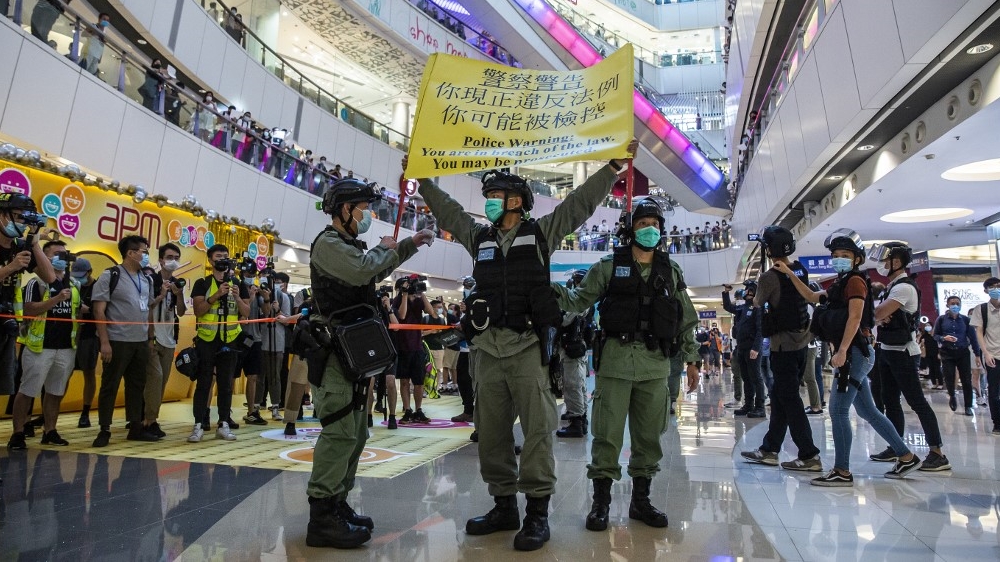 Police have arrested at least 10 people, including a 15-year-old, under the new law for suspected threats to China’s national security. Janet Pang Ho-yan, a lawyer representing those arrested, said police collected DNA samples from her clients and searched their homes.

“We are shocked to learn that the police handled the cases like this because our clients only carried or are found to have some promotional materials,” Pang told the South China Morning Post on Saturday.

“According to news reports, they include flags, stickers or leaflets … What is the DNA sample collection for? What do they want to prove? They already found the items … They also collected personal data in a disproportionate manner.”

The Hong Kong Free Press, citing the city police, said officers are authorised to collect DNA samples if there are “reasonable grounds” to suspect the person has committed a “serious offence”.

Meanwhile, in a reflection of the widespread unease over the legislation, major US internet companies including Facebook, Microsoft, Google, Twitter and Zoom have announced they have suspended the processing of requests for user data from the Hong Kong authorities while they study it.

Chinese-owned social media platform TikTok, which only operates outside China, said on Tuesday it would exit the Hong Kong market within days. Its departure means Hong Kong users, like those in mainland China, will be cut off.

US President Donald Trump’s top advisers weighed proposals to undermine the Hong Kong currency’s peg to the US dollar, Bloomberg reported on Tuesday, citing people familiar with the matter, although the idea did not appear to gain traction. 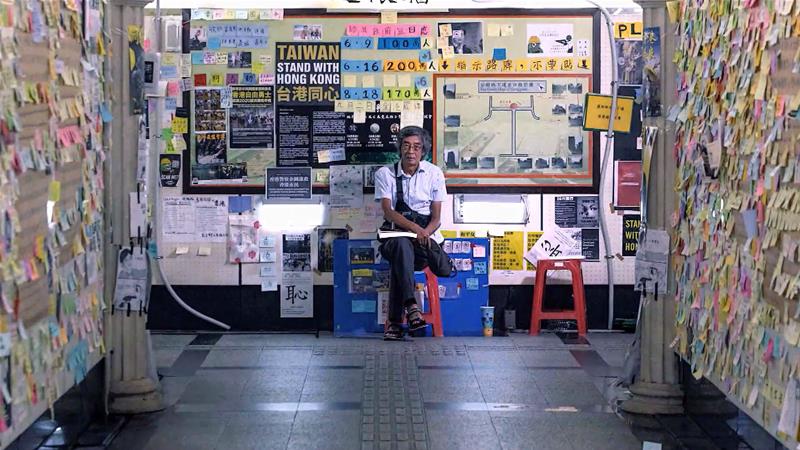 The saga of the kidnapped bookseller of Hong Kong