WASHINGTON — Senator Joe Manchin III, the West Virginia Democrat who heads the Senate Energy Committee, announced Wednesday that he would vote to confirm Representative Deb Haaland of New Mexico to head the Interior Department, most likely ensuring that one of President Biden’s most embattled cabinet nominees will be confirmed to office, despite escalating opposition to her from Republicans.

The vote of Mr. Manchin, a centrist Democrat from a fossil fuel state who often sides with Republicans on energy issues, could be crucial to Ms. Haaland’s confirmation. Republicans this week sharpened their attacks on the former environmental activist, signaling that the vote to confirm her could come down to party lines in the evenly-divided Senate.

Mr. Manchin’s announcement that he plans to vote for Ms. Haaland also underscores the crucial role he will play in the success or failure of the president’s legislative agenda. (He said last week he would vote against another of Mr. Biden’s nominees, Neera Tanden, who was nominated to head the Office of Management and Budget, casting doubt on her prospects for confirmation.)

If confirmed, Ms. Haaland would make history as the first Native American to head a cabinet agency. She would also play a central role in advancing President Biden’s climate change agenda as the head of an agency that oversees more than 500 million acres of public lands, including national parks, oil and gas drilling sites, and endangered species habitat. And she would be charged with enacting one of Mr. Biden’s most contentious proposals: the banning of future leases to conduct hydraulic fracturing, or fracking, for oil and gas on public lands.

On Tuesday, Senator Maria Cantwell, Democrat of Washington, told Ms. Haaland, “I almost feel like your nomination is sort of this proxy fight over the future of fossil fuels.”

That proxy fight has ignited as Republicans have expressed concerns about Ms. Haaland’s history of pushing to shut down fossil fuel drilling and pipelines — positions that go far beyond those of Mr. Biden.

During her two-day Senate hearing this week, Ms. Haaland, who was first elected to Congress in 2018, sought repeatedly to persuade Republicans that, in her role as the head of a federal agency, she would carry out the agenda of the president, rather than push her past personal positions.

In particular, Republicans pressed her again about her past remarks, such as an interview in 2019 in which she said, “I am wholeheartedly against fracking and drilling on public lands,” and her participation with the Standing Rock Sioux protesters in North Dakota in 2016 who camped out for months in opposition to the Dakota Access oil pipeline.

Ms. Haaland sought to thread a needle between those past remarks and actions, saying, “If I’m confirmed as secretary, that is a far different role than a congresswoman representing one small district in my state,” she said. “So I understand that role: It’s to serve all Americans, not just my one district in New Mexico.” 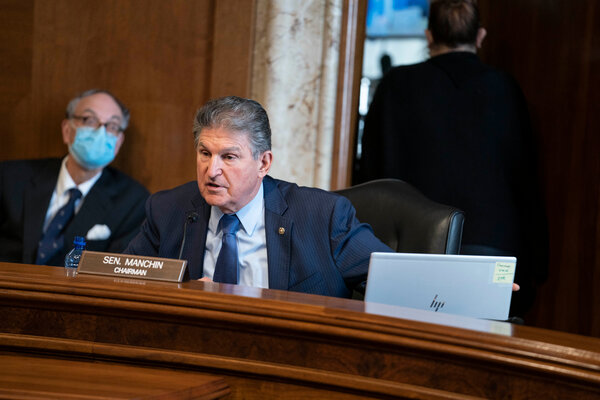 Senator John Barrasso of Wyoming, the ranking Republican on the energy panel, singled out remarks made by Ms. Haaland in 2018 as she campaigned to eliminate oil and gas production in New Mexico, and proposed legalizing and taxing cannabis as a way to make up for the lost state revenue.

Ms. Haaland responded that the proposal was intended to signal that she wants to “diversify sources of revenue for education,” and she added, “I don’t know what President Biden’s stance is on marijuana.”

Senator John Hoeven, Republican of North Dakota, pressed Ms. Haaland on the economic consequences of shutting down the Dakota Access pipeline, asking if she understood that the shutdown could lead to heavy job losses in his state.

“If something shuts down, I understand that jobs can be lost,” Ms. Haaland said. “I don’t know the specificity of every single job there. I would be more than dedicated to being briefed on the issue if confirmed.”

While Ms. Haaland told Republicans that she hoped to work with them if confirmed, she did not shy away from her heritage or her history as an environmentalist. In her closing statement, she said, “Navajo Code Talkers in World War II used the Navajo word for ‘our mother’ as code for ‘the United States.’ I feel very strongly that sums up what we’re dealing with.” She added: “You’ve heard the Earth referred to as Mother Earth. It’s difficult to not feel obligated to protect this land. ”

But even before her hearing had concluded, the Republican National Committee sent out an email urging senators to vote against Ms. Haaland, writing, “By nominating Haaland, Biden is embracing far-left special interest groups who do not care what jobs they destroy, do not know the true impacts of their policies, and have no answers on when they can get Americans back to work.”

Should Republicans unite against Ms. Haaland, she would need the support of every Democrat in the evenly divided Senate, which would allow Vice President Kamala Harris to cast the deciding ballot in a party-line vote. Until Wednesday, the vote of Mr. Manchin, who heads the Senate energy panel, remained uncertain. Mr. Manchin, whose home state of West Virginia’s economy is heavily reliant on coal mining, has expressed concern about Mr. Biden’s plans to curb fossil fuel exploration.

In questions to Ms. Haaland, Mr. Manchin made clear that, while he did not agree with many of her past positions, he appeared open nonetheless to supporting Mr. Biden’s nominee, asking if she supported the idea of energy independence.

Ms. Haaland responded: “We want to move forward with innovation and all of this for our energy needs. That’s not going to happen overnight. We will still rely on fossil fuel energy.”

In a statement announcing his support of Ms. Haaland, Mr. Manchin said, “while we do not agree on every issue, she reaffirmed her strong commitment to bipartisanship, addressing the diverse needs of our country and maintaining our nation’s energy independence.”

It may be that Ms. Haaland does not lose every Republican’s vote: Senator Lisa Murkowski, Republican of Alaska, whose state is 18 percent Alaska Native, is still seen as a possible “yes” vote.

In an effort to emphasize her bipartisan bona fides, Ms. Haaland on Tuesday was introduced to the Senate committee by Ms. Murkowski’s fellow Alaska Republican, Representative Don Young.

“You may be wondering why I am doing this,” he said. “Debbie and I became friends” working on the House Natural Resources Committee, he said. “I have had her reach across the aisle to talk to me about Alaska. She’s bipartisan.” Nonetheless, Mr. Young stressed that he disagrees with proposed policies to end drilling.

“Anyone who thinks we’re going to call off fossil fuels immediately is smoking pot,” he said, adding “that’s legal, by the way, in the state of Alaska.”