BERLIN/MANNHEIM, Germany (Reuters) – German hospitals with spare capacity on Tuesday welcomed their first coronavirus patients from Italy, where an overwhelmed health care system has seen the pandemic kill more people than in any other country. 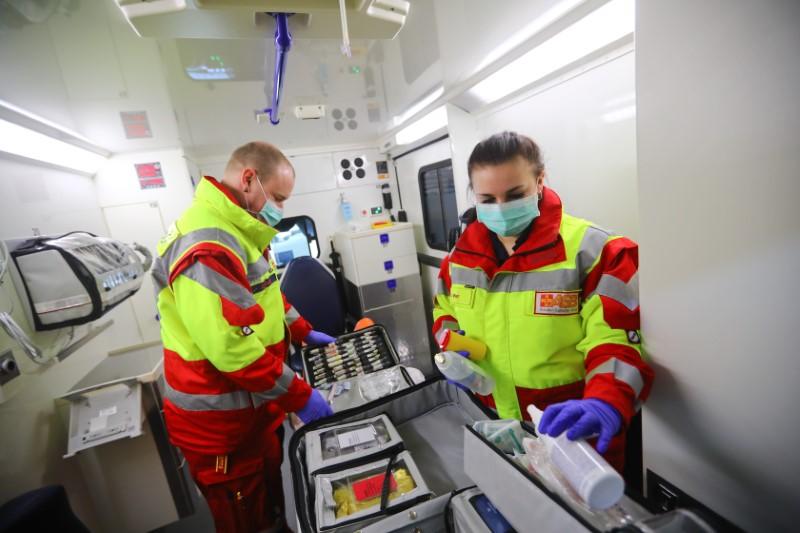 Ahead of an expected larger wave of home-grown infections that German authorities are preparing for, a first group of six Italian patients arrived at Leipzig airport in the eastern state of Saxony on Tuesday morning.

Saxony premier Michael Kretschmer said the government in Italy, where confirmed cases of the virus have topped 64,000 and deaths risen above 6,000, had asked for help. Germany was the first country to take in Italian patients.

Leipzig’s university hospital took two of the transported patients, a spokesman said, both critically ill 57-year-old men moved from intensive care in Bergamo, at the epicentre of Italy’s outbreak and where overburdened wards are having to choose who to give life-saving ventilator treatment to.

A benefit to Germany from the transfers is that its hospitals will gain valuable further experience in treating coronavirus patients before the country’s tally of serious cases soars.

Germany has 27,000 confirmed coronavirus cases but only 114 deaths, and is using the time before the expected surge to strengthen its intensive-care capacity.

The government is offering hospitals huge state subsidies to help accelerate plans to double that capacity, currently at around 28,000 beds.

Germany has also been more rigorous than some other EU countries in testing for coronavirus, one possible factor behind the country’s exceptionally low mortality rate.

In Italy, where an ageing population is a key factor in the apparently unusually high mortality statistics, the head of the agency collating data on the epidemic told La Repubblica newspaper that he believed as many as 640,000 people could have been infected.

“We have still three, five, seven days because we are before the (bigger) wave,” Hartmut Bueckle, a spokesman for the university clinic in Freiburg, close to the French border, told Welt TV. “We want to use this time to offer our French neighbours the possibilities we still have for now.”

Thomas Kirschning, a senior doctor and intensive care coordinator in the western city of Mannheim, said his clinic had taken a recovering 64-year-old French patient from Colmar, where the intensive care capacity is stretched to breaking point.

“Colleagues in France are overburdened at the moment,” Kirschning told Reuters in a television interview.

“At a time when our neighbours urgently need help, we would like to do our part…as an act of cooperation and humanity to take on the patients and help them,” he said.