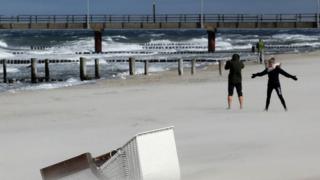 A regional court in eastern Germany has ruled that locals can go to the popular Baltic coast this Easter weekend, despite the coronavirus lockdown.

The Greifswald higher court said the regional government’s travel ban was “disproportionate” in curbing people’s local freedom. Germans from other regions remain banned from the coast.

The Mecklenburg-West Pomerania government has accepted the decision.

But the government urged locals to stay 2m (6.6ft) apart to avoid contagion.

Temperatures on Germany’s Baltic coast are set to climb above 20C on Sunday and forecasters say it will be a sunny Easter weekend.

Lockdowns are in force across Germany, but the restrictions vary from state to state. The toughest measures have been imposed in Bavaria and the Saarland.

The number of Germans infected with Covid-19 has risen for the fourth day in a row, reaching 113,525, the respected Robert Koch Institute says. There had been four days of decline. Almost half of those infected have recovered, says the RKI.

And the death toll has reached 2,373, with another 266 fatalities reported on Friday – still well below the death rates in Italy, Spain, France and the UK. Johns Hopkins University in the US puts the number of infections in Germany at over 118,000 with more than 2,600 deaths.

Germany’s large-scale testing for infection is believed to have kept the figures down.

The picturesque town of Stralsund on the Baltic coast is Chancellor Angela Merkel’s constituency – she has held that seat since 1990.

Nearby lies the island of Rügen, a major holiday destination for Germans.

One of the lawyers who argued against the regional government’s travel ban, Jost von Glasenapp, called it “meaningless”, broadcaster NDR reported.

Nobody, he said, had been able to explain to him “why the infection risk was higher when people travelled from the overcrowded town to the spacious coast”.

In its ruling the court also described as “incomprehensible” the authorities’ decision to exclude the regional capital Schwerin and its suburbs from the travel ban.

And the judges argued that there would now be more space in the seaside resorts because foreigners and Germans from outside the region could not go there.

Two cases lodged by Germans living outside Mecklenburg-West Pomerania, who wanted to travel there, were rejected by the court.

In another exception to Germany’s lockdown, the federal government is allowing thousands of Romanians and Poles to fly in to help with the spring harvest, especially to pick asparagus and strawberries.

There is a shortage of farm labour because of the coronavirus restrictions, so up to 80,000 foreign seasonal workers will be allowed in during April and May, on direct flights.

In normal years some 300,000 labourers travel to Germany for fruit and vegetable picking.

Authorities are doing medical checks on those arriving at farms, keeping them separate from other workers, and obliging them to work only in small groups.

A union spokesperson, Reinhard Steffen, voiced concern about the scheme, in a Reuters interview.

“We fear that hygiene standards will not be met and people’s accommodation will not be properly regulated. We are calling for quarantine, with a maximum of two people to one room,” he said.