Marjorie Taylor Greene has embraced the fringe conspiracy and has a history of racist and Islamophobic rhetoric. 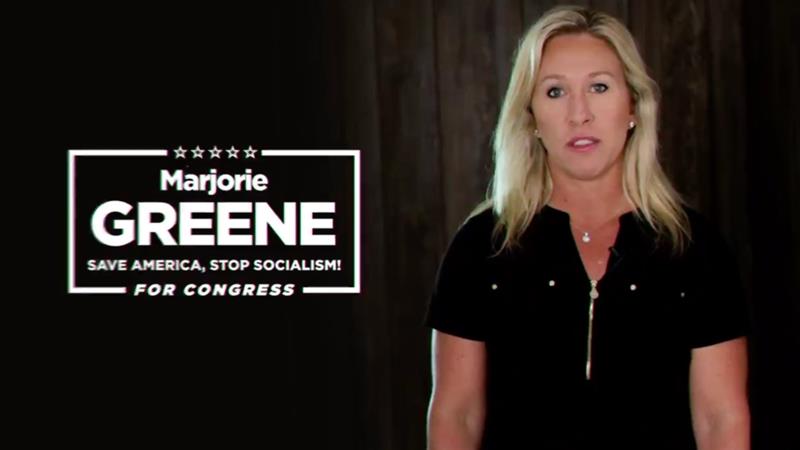 A Republican primary runoff for an open seat representing Georgia in the United States House of Representatives could see a candidate with a history of making racist, Islamophobic and anti-Jewish remarks, as well as supporting QAnon conspiracy theories, become the party’s nominee.

Marjorie Taylor Greene, a businesswoman who has become a lightning rod for controversy, is set to face off against John Cowan, a neurosurgeon, in Georgia’s deeply conservative 14th congressional district on Tuesday.

The winner of the primary is considered all but certain to win in the general election, taking the seat of retiring incumbent Tom Graves.

Greene, who beat Cowen by 20 percentage points in the nine-person first round of the primary, is considered the frontrunner in Tuesday’s election, despite several prominent Republicans seeking to distance themselves from the candidate.

The backlash mostly began in June, when the Politico news site attained several videos Greene had posted on social media.

In one, she compared Black Lives Matter protesters with the neo-Nazis and Ku Klux Klan who had marched in the “Unite the Right” in Charlottesville, Virginia in 2017, calling all three “idiots”.

She also rejected the idea that there was a racial disparity in the US, declaring “guess what? Slavery is over … Black people have equal rights” and saying that minorities are held back by drugs, gangs, lacking education, and abortion, “not white people”.

Instead, she declared that “the most mistreated group of people in the United States today are white males”, she said, according to Politico.

Meanwhile, in another instance, she accused Democrats of “trying to keep the Black people in a modern-day form of slavery” and said Black Republicans get called “coon” and “Uncle Toms” by liberal Black voters.

The news site said the videos were apparently recorded between late 2017 and early 2019.

The Politico report was published amid an ongoing movement against racial injustice in the country following the death of George Floyd, an unarmed Black man, in Minnesota on May 25 after a police officer kneeled on his neck for nearly nine minutes.

‘You have to be sworn in on the Bible’

In the videos, Greene also showed a preoccupation with recently-elected Muslim members of Congress, calling the 2018 midterm elections, which saw the most diverse group of legislators enter Congress in US history, “an Islamic invasion of our government”.

In one instance, she referred to recently-elected representative Ilhan Omar as “that woman out of Minnesota” who “has got to wear a head covering”.

She also said taking the oath of office on the Quran should be prohibited, saying instead: “No! You have to be sworn in on the Bible”.

The vitriol was not reserved for Muslims, in another video and on social media, Greene has also supported an anti-Semitic conspiracy theory that George Soros, the Democratic mega-donor and Holocaust survivor, was a Nazi collaborator.

“George Soros says dark forces have been awakened by Trump’s win. I don’t think so,” she said in one video, according to Politico. “George Soros is the piece of crap that turned in – he’s a Jew – he turned in his own people over to the Nazis.”

The June report prompted a swift rebuke from the three most powerful House Republicans as well as the National Republican Congressional Committee, a campaign arm of the Republican Party that is not involved in primary races.

But as Politico reported on Sunday, the statements have not translated into a coordinated resistance against Greene.

Of the three top Republicans in the chamber, only one, Steve Scalise, has explicitly helped Greene’s opponent Cowan.

While a spokesman for House Minority Leader Kevin McCarthy told Politico in June that Greene’s comments were “appalling”, the spokesman more recently told the news site that McCarthy was remaining neutral and letting the primary process play out.

Greene, for her part, has remained unapologetic.

“For too long, Republicans have played footsie with the DC Swamp,” she wrote on Facebook on July 28. “I have no time or patience for this nonsense. I’m not politically correct, and I make no apologies for it. I tell it like it is.”

Even before the June report, Greene had been a controversial candidate for her outspoken support of so-called QAnon conspiracy theories.

If she wins in the general election, she will be the chamber’s first open supporter of QAnon, a pro-Trump collection of baseless accusations spread by an unknown internet figure called “Q” that centre, in part, on alleged paedophilia rings run by Washington elites.

In a video posted online, Greene has called the shadowy figure at the centre of the theories a “patriot” and said the predictions have been accurate, according to the Daily Beast. Greene has also posted QAnon catchphrases, tweeting “Trust the plan” and “#GreatAwakening”.

The FBI has labelled QAnon a possible “domestic terrorism” threat.

President Donald Trump tweeted his congratulations for Greene on June 12, shortly after she won the first round of the primary, but before Politico’s report sparked the most recent round of controversy.