STRASBOURG/PARIS (Reuters) – France recorded its worst daily coronavirus death toll on Monday, exceeding 3,000 for the first time, and army helicopters transported critical patients from the east to hospitals overseas as the country battled to free up space in life-support units. 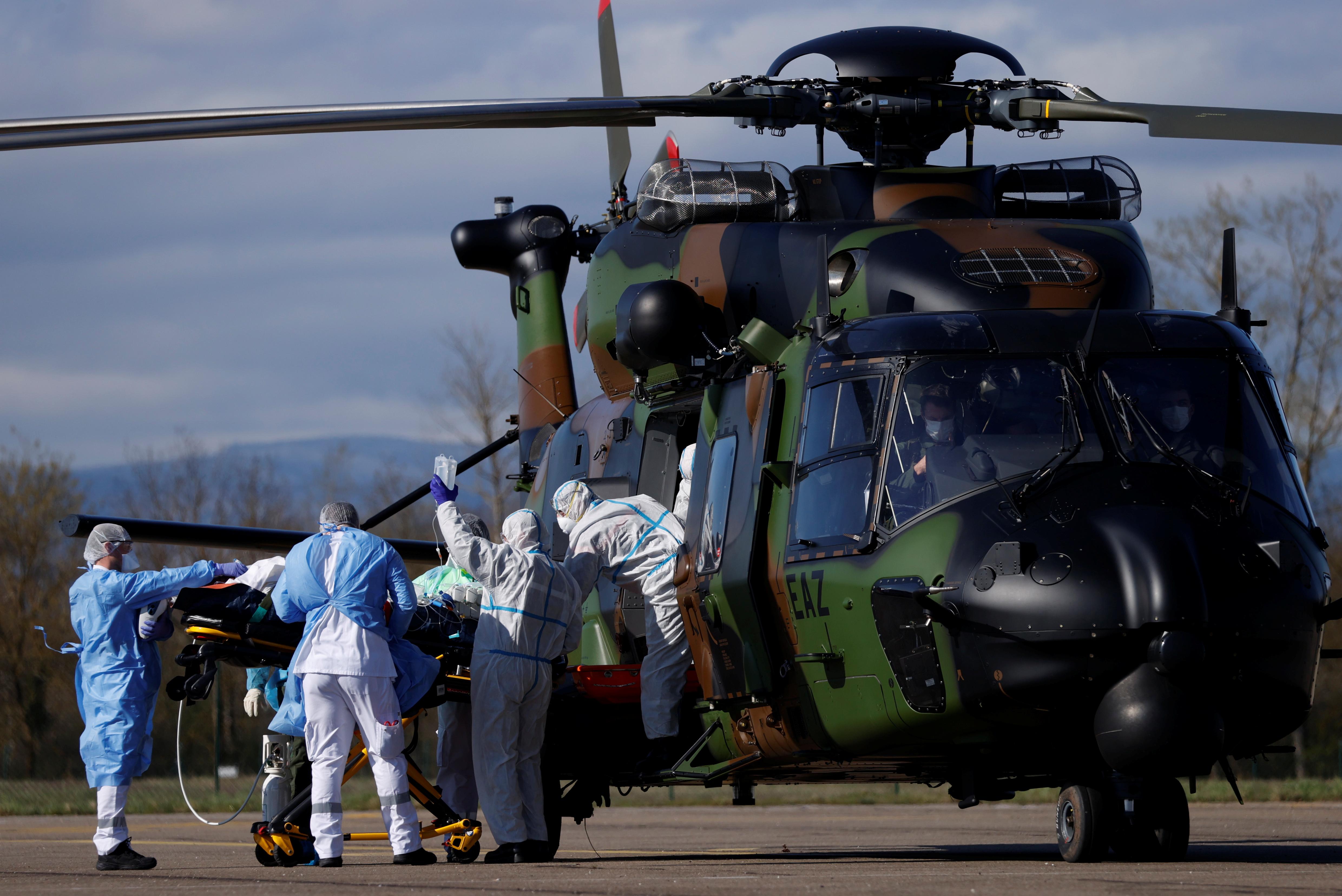 The Grand Est region the first in France to be overwhelmed by a wave of infections that has rapidly moved west to engulf the greater Paris region, where hospitals are desperately adding intensive care beds to cope with the influx.

The number of coronavirus deaths since March 1 climbed by 16% to 3,024, while the number of intensive care cases rose more than 10% to 5,107, rising after two days of falls.

Prime Minister Edouard Philippe has warned the country’s 67 million people that the toughest weeks in the fight against epidemic are still to come and doctors in the capital said on Monday they were close to saturation point.

“Today in the pulmonology unit we are as full as full can be,” Jerome Pinot, a doctor at the Georges Pompidou hospital in Paris, told Reuters.

“To find a place in intensive care is a never-ending headache. We ask ourselves whether we can move this patient to this unit to take another patient. It’s an incessant game.”

France has increased the number of beds in intensive care units from 5,000 to about 10,000 since the start of the crisis and it is scrambling to reach 14,500.

In the eastern city of Strasbourg, paramedics in hazmat suits transferred six patients onto three Caiman NH90 medicalised helicopters before they were moved to hospitals in Bern and Frankfurt.

Eighty have so far been moved from the region to Switzerland, Germany and Luxembourg. Transfers from Paris hospitals are expected in the coming days.

Health officials believe that the benefits of a national lockdown that has been in place since March 17 will begin to be felt by the end of the week.

They consider new daily hospital admissions and the number of those going into life-support as the key indicators to see if the tide is turning and if the health system can cope.

“We are not in a drop at the moment. We hope that this increase will be more modest in the coming days,” Jerome Salomon, head of the French public health authority, told reporters.

To ease the stress on the system, officials want to send some patients to other countries and to less stricken regions to make space in the worst hit areas so that if the peak shifts, then the capital in particular could again take patients in two weeks’ time.

“The growth phase of the epidemic in the region will probably last two weeks,” said Pierre Delobel, head of the infectious and tropical diseases unit at the University Hospital in Toulouse, where the number of cases has jumped from 8 to 40 in a week. 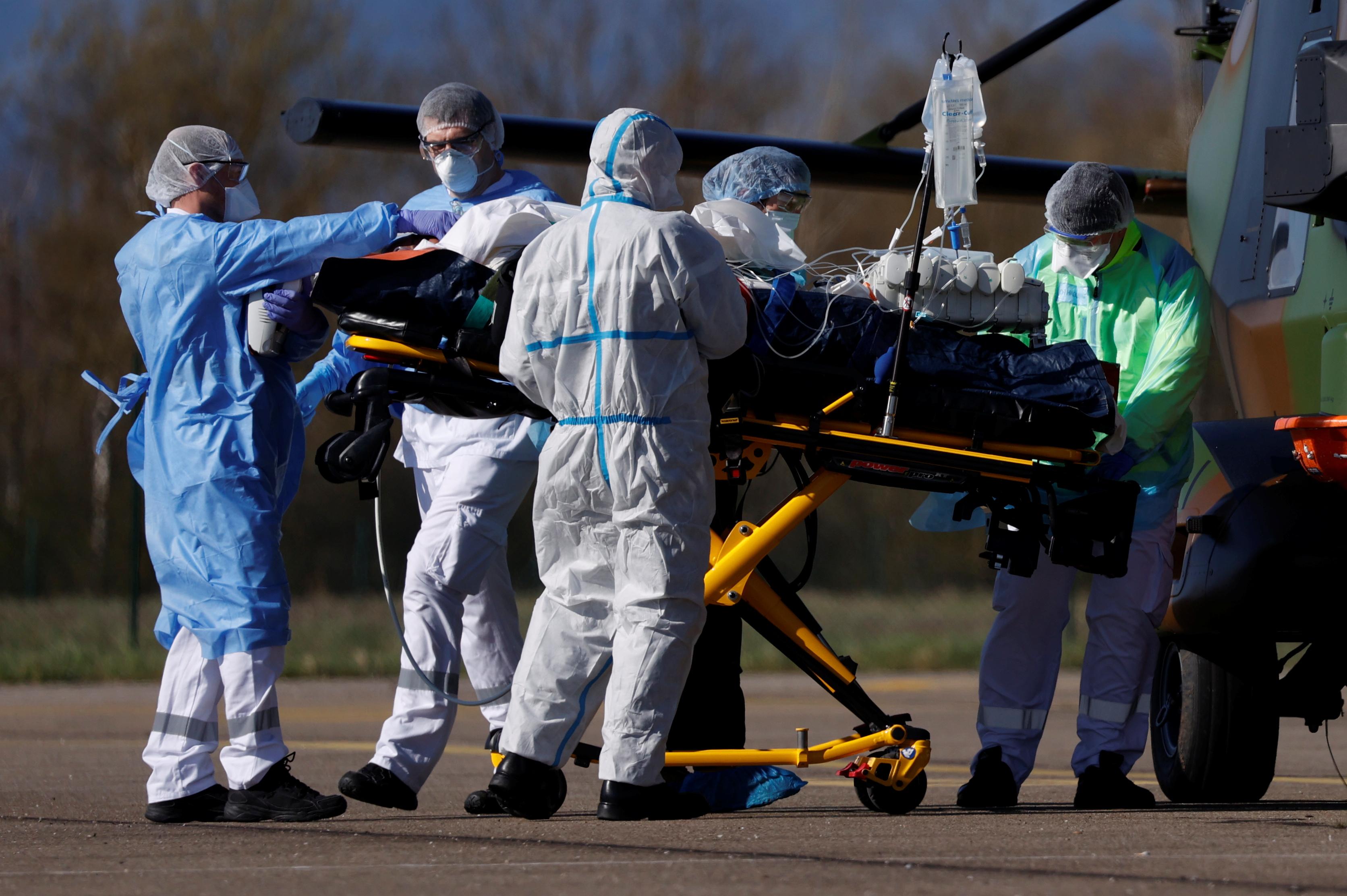 “Then there will be a slowdown but that does not mean a decrease, it will go up less quickly.”

Highlighting the cost to frontline medical personnel, a doctor, who had been close to retirement, died in the Paris area at the weekend from the virus.

“We will use this rage from his death to fight more and more and be tougher than this virus,” Aurelien Rousseau, director general of the Paris region health authority, said in a letter made public.