How many doughs can serve as a base for pillowy cinnamon buns in one moment, and not-too-sweet hamburger buns the next?

A relative of Hokkaido milk bread and French brioche, this enriched bread has unparalleled versatility. It also defies categorization: Its silky, delicate, lightly sweet crumb has as much in common with pastry as it does with bread, allowing it to move fluidly from sweet to savory.

As with most yeasted doughs, nailing this one requires special attention to time and temperature, as well as an understanding of gluten development. But once you learn how to conjure up this shape-shifting bread, you might very well find yourself eating it, in some form or another, all day long.

Start With a Tangzhong 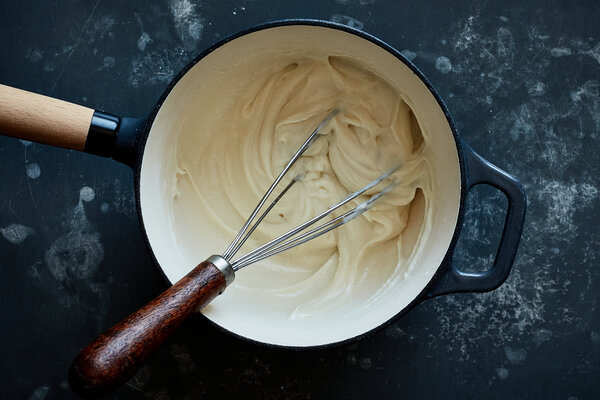 This bread’s feather-light texture comes from using a tangzhong, or “water roux,” which originated in Japanese baking but was popularized throughout Asia and beyond by the Taiwanese pastry chef Yvonne Chen. (Another Japanese technique known as yudane, which uses boiling water, is similar.) In breadmaking, tangzhong is a mixture of flour and water (or milk) that is cooked on the stovetop before it’s added along with other ingredients. Cooking alters the chemical structure of flour, breaking down the starches and causing them to swell and absorb water to a much greater degree than they would without heat, in a process known as gelatinization. Inside the dough, the tangzhong absorbs even more water, making the final bread softer, fluffier, springier and more resistant to staling.

No Need to Proof Your Yeast

You may notice that the accompanying recipe omits any “proofing” of the yeast, calling instead for the yeast to be added directly to the dough. While it was once necessary to dissolve active dry yeast in warm water with a pinch of sugar and wait for it to bubble (therein “proving” it’s alive), active dry yeast has become more reliable. If you keep your yeast sealed and refrigerated, and it’s not approaching the expiration date, you can be confident it’s active. There’s even an advantage to adding it to the dough directly: The motion of the mixer dissolves the granules slowly, which helps prevent the dough from fermenting too quickly.

Gluten forms when certain proteins in wheat come into contact with water, and kneading or otherwise working bread dough develops more gluten, lending breads like sourdough their chewy texture. It might seem counterintuitive, then, that a soft, tender bread like this one requires lots of gluten development. But gluten provides structure, allowing the dough to expand dramatically in the oven, and supporting the bread as it cools so it doesn’t collapse. Because the proteins in wheat are slower to absorb water than starches, the dough should be mixed slowly at first, so resist the urge to increase the speed and hurry things along, since it could impede development.

The whole process takes time, especially since you’re adding fat, which inhibits the formation of gluten bonds, so set your timer and consider putting on a podcast while the mixer does the work. At the end of the suggested mixing time, make sure the dough has sufficient “strength,” or gluten development, by doing a windowpane test. Work a small portion of dough outward between your fingertips. A well-developed dough will stretch, without breaking, into a thin membrane that light can pass through.

Ensuring that your dough bakes into soft pull-apart bread is largely about controlling the temperature during mixing. The prolonged action of the dough being worked generates friction, causing it to warm, and a too-warm dough can ferment too quickly, throwing off the rise. It may also become greasy when the butter is added and lack elasticity, leading to a dense, dry crumb.

What to Cook Right Now

Sam Sifton has menu suggestions for the coming days. There are thousands of ideas for what to cook waiting for you on New York Times Cooking.