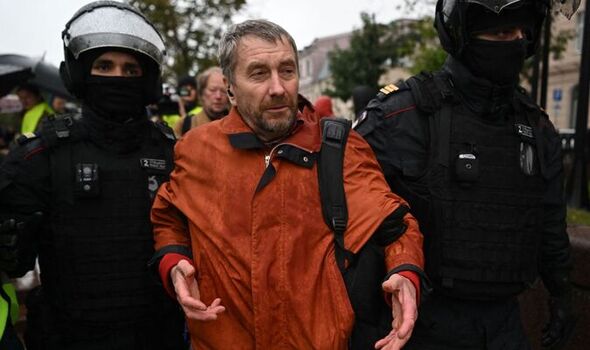 Vladimir Putin’s Russia has a history of cracking down on dissent. In 2014, Putin’s Government introduced laws which could see demonstrators in Russia hit with significant fines and the possibility of time in prison for organising demonstrations without the permission of authorities.

“The right to freedom of assembly has increasingly been under attack in Russia”, Human Rights Watch said at the time.

Much like Russia’s attempts to silence independent media outlets, the Kremlin has sought to control the Russian people using force where necessary. After Russian troops entered Ukraine in February, use of the word ‘war’ was banned in favour of ‘special military operation’.

In this environment, Russian people are using other means to show they are against the invasion of Ukraine.

“In an authoritarian regime, it is quite hard for someone to declare their views publicly and there might be repercussions for it. But there are different ways to do this”, Dr Colin Alexander told Express.co.uk, an expert in political communications and senior lecturer at Nottingham Trent University.

“Around bars and cafes, there will be conversations. During the military draft we saw young people and middle class people leaving, so we do see that Russian society is straining.”

It is thought that the number of Russians who have fled the country since partial mobilisation was declared equal to if not greater than the number who will be conscripted.

There are widespread reports that the draft is not going as planned, with some of those forced to serve finding ways of excusing themselves from fighting. Stiff penalties exist for desertion, with reports that Russian soldiers have been told to shoot their comrades who try to retreat from battle.

As much as the Kremlin tries to hide the reality of war and its impact on Russia, there are signs that people are suffering. Independent analysis predicts Russia’s GDP output could decrease by up to nine percent in 2022, as trade in Russian goods and services declines.

On social media platforms, videos of violence within Russia are shared widely, such as a report that 11 Russian men were killed in a shooting incident in September at a military training camp in the city of Belgorod, near Ukraine.

A recent Twitter thread by Chris Owen, a military historian, shared reports of how mobilised reserves from the Kazan region are running away from training camps to escape being sent to the frontlines.

The digital theatre is another key aspect of the war and convincing the people of Russia that the conflict is pointless and unwinnable. Ukrainian battlefield successes in Kherson and Luhansk are being shared widely online, and there is some evidence that these stories are reaching Russian audiences.

Researcher Natalia Savelyeva, writing for Open Democracy, claims that her investigations into how Russians feel about the war has revealed that “Russian society remains divided – and that many people remain unsure about the war and its motivations”.

These admissions cast doubt over the Kremlin’s ability to continue pushing for escalation in Ukraine, when people back home in Russia are unclear why they are at war, even privately if not publicly.

Many in Ukraine and the West have called for more displays of dissent from Russia, including by asking people to take to the streets to show their opposition to Vladimir Putin.

In September, Ukrainian President Volodymyr Zelensky urged the Russian people to protest against mobilisation in Russia, not only through street demonstrations, but by giving themselves up to Ukrainian troops at the first opportunity on the battlefield. Ukraine’s President encouraged dissenting Russians to surrender by promising they would be treated fairly as prisoners of war.

Some protests were seen in Russia when Putin made the partial mobilisation order in September, predominantly in bigger cities such as Moscow and St. Petersburg.

Videos of large anti-war gatherings were widely shared online, showing Russian police cracking down on anyone they were able to single out in the crowd.

While these gatherings eventually fizzled out, Dr Alexander argued that there are clear signs of tension building in Russian society through these discreet and public displays of dissent, which may reach a tipping point and have consequences for the entire war in Ukraine.

“Russia is not greatly different from any other society. Many people disagree with the government but have to silently put up with it. But that tension will build up, and at some point people will feel they have to do something.”