US president defended his actions in the early days of the crisis and played down specific warnings on the contagion.

President Donald Trump has denied seeing a memo by a senior United States official warning of mass casualties and economic devastation from the new coronavirus, months before the pandemic began inflicting thousands of deaths in the US.

Trump on Tuesday said he had not seen communications sent by White House trade adviser Peter Navarro in late January warning of the serious threat posed by the coronavirus.

“I read about it maybe a day, two days ago,” Trump said when asked about the January 30 memo at a news conference. “It was a recommendation that he had, I think he told certain people on the staff, but it didn’t matter. I didn’t see it.”

Navarro, a China hawk, sent a memo on January 30 warning that the new coronavirus could create a pandemic and urging a travel ban for China, The New York Times reported. A second memo, written in late February and sent to the president, said the virus could kill up to two million Americans.

“The lack of immune protection or an existing cure or vaccine would leave Americans defenceless in the case of a full-blown coronavirus outbreak on US soil,” said one of Navarro’s messages.

“This lack of protection elevates the risk of the coronavirus evolving into a full-blown pandemic, imperiling the lives of millions of Americans.”

The US president continued to defend his actions in the early days of the crisis and played down Navarro’s memos.

Navarro warned the coronavirus crisis could cost the US trillions of dollars and put millions of Americans at risk of illness or death.

Trump said he was not aware of the memos, but that he unilaterally followed some of their recommendations, including taking steps to curtail travel from China.

But he said he would not have wanted to act prematurely when it was not clear how dire the situation would become.

“I don’t want to create havoc and shock and everything else. I’m not going to go out and start screaming, ‘This could happen, this could happen’,” Trump said. “I’m a cheerleader for this country.”

Trump also denied knowing about US intelligence warnings that were reportedly made as early as November about a contagion that had the potential to lead to a “cataclysmic event”.

ABC News, citing two unnamed officials, reported that multiple warnings were made late last year, including to the White House.

Asked about the report on Wednesday, Trump said he learned about the gravity of the crisis shortly before announcing travel restrictions on China on January 31.

Health experts have suggested the weekly death totals will reach a new high in the US this week. More than 14,500 people have died from the virus in the US so far, with about 424,000 confirmed infections.

Nearly 800 people died on Tuesday in New York state, the epicentre of the US crisis.

Jeremy Konyndyk, a former Obama administration official who wrote guidance on health emergencies, said the memos clearly show Trump and his officials failed to take action on the threat of coronavirus.

He told Al Jazeera the emergency guidelines were specific on a fast-spreading respiratory disease and warned to “trigger preparedness”.

“It listed a number of things that the administration should begin to do: diagnostic testing; ensuring the PPE [personal protective equipment] supply was sufficient; begin planning for mass-casualty events – all of that was in there,” said Konyndyk.

“That was disregarded and I think it really isn’t quite right to blame the WHO for our own lack of preparedness. If they would have followed that playbook, they would have begun kicking things into gear on January 30.”

“Coronavirus is not Donald Trump’s fault. But he does bear responsibility for our response and taking his duties seriously,” Biden said. “His failings and his delays [are] causing real pain for so many Americans.”

Trump should use his powers under federal law to ensure the production of protective gear for health workers, offer healthcare coverage to those who have lost it, and coordinate states’ efforts to procure supplies, Biden said on Tuesday.

“Trump likes to say he’s a wartime president,” Biden said. “Well, he needs to step up and act like it.”

For his part, Trump has redoubled his criticism of the World Health Organization for its handling of the virus and threatened to suspend US funding to the United Nations agency.

Trump also removed the inspector general (IG) who was to oversee the government’s $2.3 trillion coronavirus response, a spokeswoman for the official’s office said on Tuesday, raising concerns in Congress about oversight of the relief package.

It was the Republican president’s most recent broadside against the federal watchdogs who seek to root out government waste, fraud, and abuse following his removal on Friday of the intelligence community’s IG, and his sharp criticism of the one who oversees the US Department of Health and Human Services.

Glenn Fine, the acting IG of the defence department, was named last week to chair a committee acting as a sort of uber-watchdog over the federal government’s response to the coronavirus crisis, including health policy and the largest economic relief package in US history.

But Trump has since designated the Environmental Protection Agency’s IG as the new acting Pentagon IG, a spokeswoman said.

Congressional Democrats said Fine’s removal, less than a week after his appointment, reinforced their determination to strictly oversee the massive spending package passed last month to prop up the economy as the country grapples with the disease.

House of Representatives Speaker Nancy Pelosi called it “part of a disturbing pattern of retaliation” by Trump.

“We will continue to exercise our oversight to ensure that this historic investment of taxpayer dollars is being used wisely and efficiently,” she said in a statement.

Trump largely shrugged off a question about Fine’s removal, saying it was his prerogative.

“We have a lot of IGs in from the Obama era. And, as you know, it’s a presidential decision,” Trump told reporters. 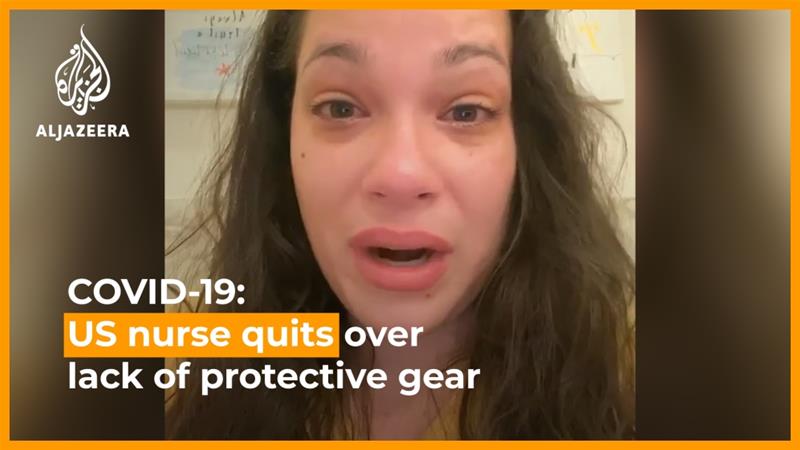 Coronavirus: US nurse quits over lack of protective gear