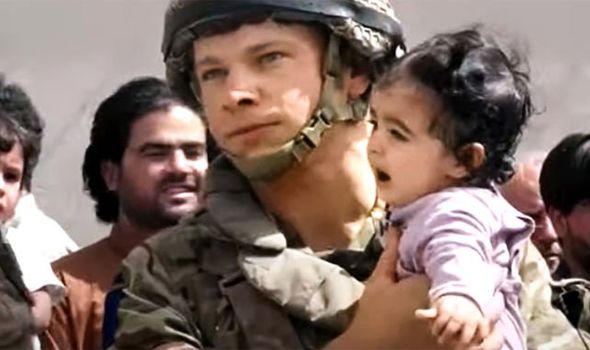 One paratrooper said: “The mothers were getting beaten by the Taliban.They shouted, ‘Save my baby!’ and threw the babies at us. Some of the babies fell on the barbed wire.

“By the end of the night, there wasn’t one man among us who was not crying.”

The heart-wrenching scenes played out in a compound beside the airport, where Afghans were frantically trying to get on flights out of the Taliban-occupied country.

Thousands pushed towards the runways as they feared “a situation worse than death” if they remained.At least 12 people have died in or near the airport since Sunday.

Troops have been climbing up ladders to carry the children to safety.

Youngsters have also been found alone in British processing centres as protests intensified yesterday, prompting further brutality from the militants.

Defence Secretary Ben Wallace admitted: “It is very, very difficult for those soldiers dealing with some desperate, desperate people.”

Witnesses told how children have been trampled outside the airport, beaten by Taliban fighters, whipped or even shot at.A Sky News journalist said: “A man has just walked up to us explaining that a little girl, two years old, is here alone.

“Someone handed him the baby, along with her American passport, over the razor wire. This little girl was born in Illinois. I am holding her passport in my hand. There are no American consulate or military staff here. The man doesn’t know what to do.”

More British troops were deployed to Afghanistan yesterday to bolster security at the airport.Taliban gunmen opened fire outside as Westerners and visa holders said they could not get inside because of “huge crowds of terrified locals”.

Intelligence reports revealed the Taliban is intensifying its hunt for all people who collaborated with Nato and US forces, especially those in the military and police.

MrWallace said the UK would stay in Afghanistan as long as the US ran the airport. He added: “Obviously we cannot just take a minor on their own but you will find, I think if you see in the footage, the family will be taken as well.”

But Former Royal Marine Pen Farthing, who lives in Kabul, said: ‘Nobody can actually reach the processing centre because of the chaos. We are looking at the worst humanitarian disaster in Afghanistan for a generation.”