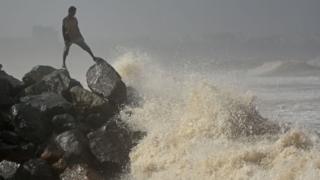 Authorities in India’s financial capital Mumbai are bracing for a severe storm which could hit its coast early on Wednesday.

Cyclone Nisarga is set to make landfall on India’s west coast, near the city in Maharashtra state. Neighbouring Gujarat state is also likely to be impacted.

The National Disaster Relief Force (NDRF) has deployed to both states.

More than 85 people were killed by Amphan in both eastern India and Bangladesh.

Mumbai is already experiencing heavy rains, strong winds and heavy tides. Although the exact path of the storm will take some hours to become clear, weather officials say that there is a chance it could hit the city directly.

If that were to happen, it would make it the first cyclone to impact Mumbai in centuries.

Authorities have begun evacuating people from low-lying areas in and around the city, the state Chief Minister Uddhav Thackeray said.

Fishermen have also been called back in from the sea and told not to venture out. The area has been put on “red alert” until Thursday, with storm surges expected.

NDRF officials told local media that they were working on a “zero casualties” approach, which means they are hoping that there will be no deaths.

“Since the cyclone is in the severe category, the damage it can cause is considerable. We are working for the best but preparing for the worst,” Director General SM Pradhan said.

However, the onset of the storm is likely to worry officials in Mumbai. With more than 50,000 confirmed cases of Covid-19, the city is already India’s worst-impacted in terms of infections.

Its healthcare system is at breaking point, with videos from state emergency wards showing patients being forced to share beds and even oxygen cylinders. With more than 20 million people, it is also the country’s most populous city.

The onset of rains in coming months is expected to bring about other illness like malaria, typhoid, gastric infection and leptospirosis.