Hospitals in Brazil are being forced to intubate coronavirus patients without sedatives amid critical medicine shortages caused by the country’s current outbreak, reports claim.

A doctor at the Albert Schweitzer municipal hospital in Rio de Janeiro said that doctors are resorting to tying patients to their beds in order to ventilate them.

Medics have also been diluting sedative medication to make it last longer and using neuromuscular blockers so patients can’t resist, they said on the condition of anonymity. 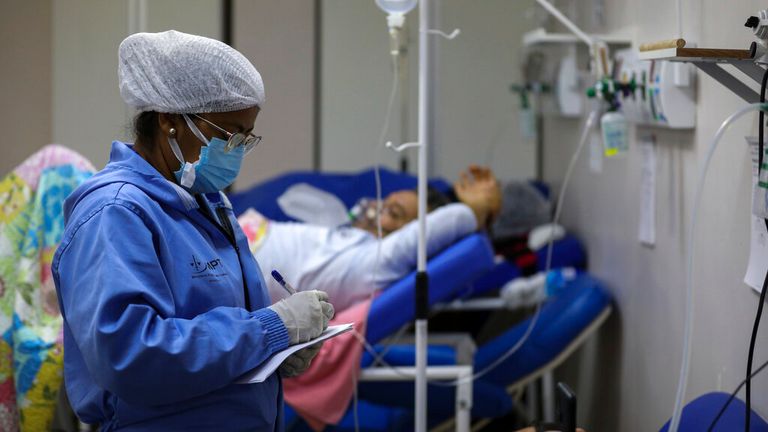 Brazil has become the epicentre of the coronavirus pandemic, with daily deaths averaging around 3,000 a day and oxygen supplies for intensive care patients at breaking point.

Describing the situation at the hospital in Rio, the doctor said: “You relax the muscles and do the procedure easily, but we don’t have sedation. Some try to talk, resist. They’re conscious.”

Brazilian newspaper O Globo reported on Thursday that other hospitals in the Rio metropolitan region were experiencing similar issues, with patients’ relatives desperately calling other medical facilities in search of sedatives.

A spokesperson for Rio de Janeiro’s health secretariat said “occasional” shortages at the Albert Schweitzer hospital are being caused by difficulties obtaining supplies on the global market.

They said that “substitutions are made so that there is no damage to the assistance provided” to patients.

The spokesperson did not comment on claims patients are being tied to their beds.

In Sao Paulo, state health secretary Jean Carlo Gorinchteyn said at a news briefing on Wednesday that 640 hospitals there were on the verge of collapse.

He said medicine shortages are possible within days and the need for medical supplies is urgent.

Nine requests for intubation medication have been made by his health ministry over the past 40 days, he added.

The last delivery of supplies only covered 6% of what was needed that month in Sao Paulo, state officials said.

Federal health minister Marcelo Queiroga said on Wednesday that a shipment of sedatives was due to arrive within the next 10 days following a deal with the Pan American Health Organisation.

An order of 3.4 million doses of intubation drugs – enough to treat 500 patients for six weeks – has also been ordered from private sector firms, officials added.

The first batch of 2.3 million doses was due to arrive in Brazil from China on Thursday.