The number of lives lost daily has been rising through most of August and September, and new hot spots keep emerging. The U.S., Brazil, India and Mexico account for more than half of the total.

A top scientific adviser in Britain has warned that recently tightened restrictions there are a “fudge” and that the country risks becoming “caught in a cycle of epidemic waves.” 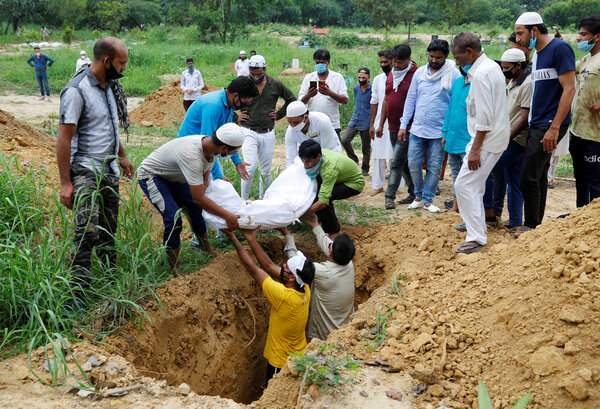 As the world moves toward another morbid threshold in the pandemic, a coronavirus death toll of one million, the countries where fatalities are increasing fastest remain spread out across the globe, with new hot spots constantly emerging.

The number of lives lost daily to the virus has been rising through most of August and September, reaching more than 5,000 in an average measured over seven days. As of Sunday morning, the global total stood at 993,600, according to a New York Times database.

On Saturday, India, the world’s second-most populous nation, continued to lead in daily virus-related deaths, with about 7,700 over the most recent seven-day period. The United States is second, with more than 5,000, Brazil third with more than 4,800, and Mexico fourth with nearly 3,000. Those four countries account for more than half of the world’s total deaths from the virus, according to the Times database.

New hot spots are also emerging in smaller countries like Israel, which led the world in new cases per capita over the past week. Warning that his country could be approaching “the edge of the abyss,” Prime Minister Benjamin Netanyahu moved this past week to require that everyone except essential workers stay home.

The pandemic continues to wreak havoc in South America, where countries including Argentina, Colombia and Peru are recording thousands of new cases daily along with some of the highest numbers of deaths per capita in the world.

With seasons changing, some countries that were hit hard by the virus in the spring and summer are beginning to shed lockdown policies, raising fears of future surges. In Europe, second waves of infections have already Britain, Spain and France.