A little round face stares out from a phone screen.

Just three weeks old, she is the cherished first daughter of Erik Alexander, 34, and Tirza Manitik, 32. 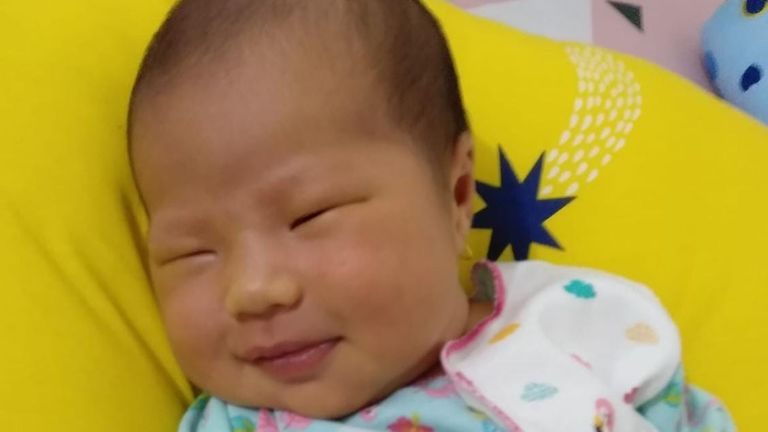 But unbeknown to her parents, in the video Beverly is already very sick.

“We only had a cough, fever and it didn’t last long. Beverly was also in good condition and didn’t show any symptoms,” Tirza explains.

“But one week later she began to show symptoms, one of them was she had difficulty sleeping and when she breast-fed, she vomited.”

Her parents went from place to place, searching around 10 hospitals in the Jakarta area until they found one with space to take her.

By the time she was admitted, her oxygen levels had plummeted and her condition was critical.

Tirza explains: “The virus was attacking her lungs and causing her to have shortness of breath.”

Erik adds: “There were a lot of fluid in her lungs. In one day, the hospital took 30 minutes to suck up the fluid and they took an X-ray almost everyday.”

Her parents say her body had fought off the COVID but was severely weakened.

When her heart stopped for the fourth time, they couldn’t save her.

Beverly was less than a month old when she died on 7 July. “The shadow in her lungs started to disappear but the doctor said she was exhausted,” says Erik, sitting by her little grave.

The small plot is decorated with rose petals in the shape of a heart.

An angel figurine rests against the slate plaque.

“It was her heart. Because her heart was pumped so many times her breathing was not stable,” says Beverly’s heartbroken mother.

“In the end, she was exhausted and her heart suddenly stopped because her heart was very exhausted.”

Indonesian doctors have seen a surge in COVID cases and deaths in children since July 2021 as the Delta variant spread. 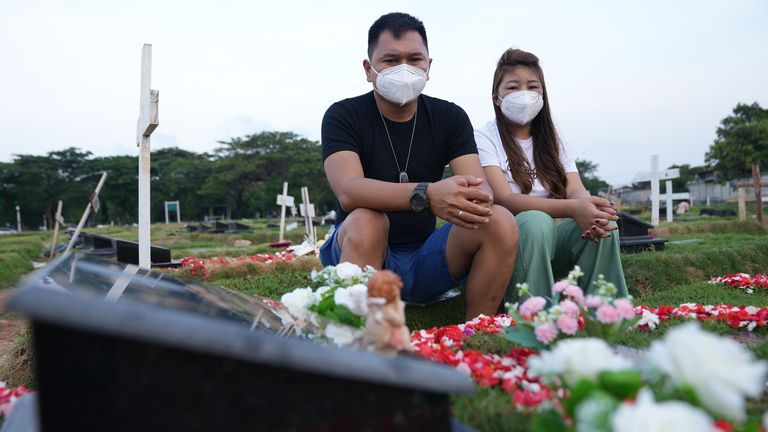 More than 1,272 children have died in total according to figures from the Ministry of Health.

According to their statistics published on 24 August, deaths of under 18s account for around 1% of Indonesia’s total COVID death toll, much higher than the global average of 0.3% (reported by UNICEF based on available data from 79 countries).

“Health protocols are very difficult to apply to children,” explains Dr Agus Susanto, a paediatrician at a hospital in Jakarta.

“Second, the use of masks in children is very difficult to apply, masks are something that make children uncomfortable. Clean living behaviours such as washing hands are sometimes forgotten. “Nutrition is also a trigger factor or risk factor for susceptibility to COVID-19. The next factor is comorbidity – in some children there are several comorbidities such as congenital heart disease, cancer, malnutrition, stunting and obesity.

“This has an impact on the vulnerability of Indonesian children to COVID-19.”

Official figures show more than half a million Indonesian children have tested positive for the coronavirus since the start of the pandemic.

The real figure could be much higher as testing among children is traditionally low. 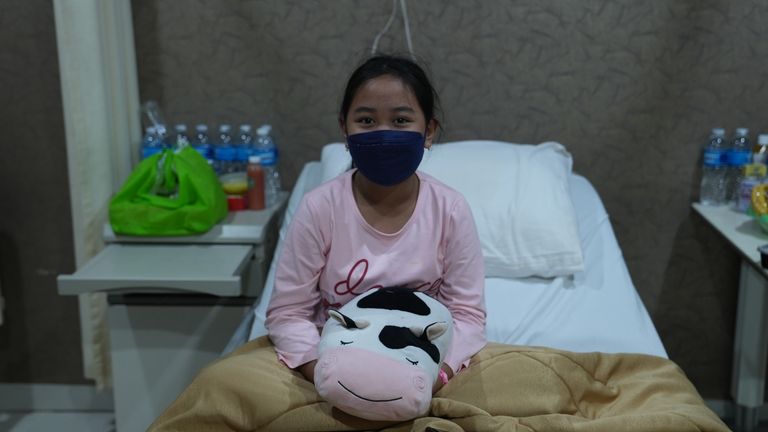 While many have asymptomatic or mild symptoms, 10-year-old Charissa Ayumi Genji – or Caca – had to be admitted to hospital after her condition deteriorated.

“The child’s condition when she first came in was symptoms like a fever, headache, cough and a cold. Since she arrived with a fever and was weak, [she] did not want to eat and drink so we had to treat her. After monitoring her condition for a few days, it is now much better,” says Dr Agus.

Caca’s mum and dad are in the beds either side of her.

Almost all the family has the virus. 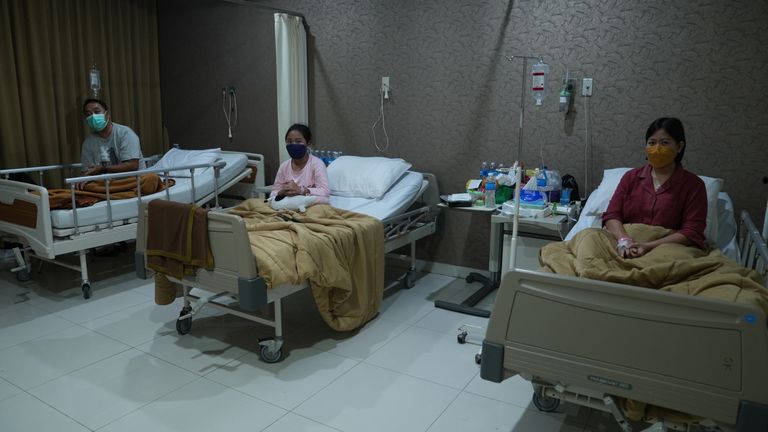 “I am very afraid. It’s so easy to be infected, [it just goes] from one person to another person,” says Caca’s mother, Encum Sumiyati. “Delta is like that, so sometimes we wear double masks.”

Along the corridor, 18-day-old Seraphine is responding well to treatment.

She was four days old when she was brought here.

“When the baby first came in she had fever and also looked yellow,” Dr Agus explains.

COVID killed a record number of Indonesian children in August.

At least 228 people aged under 18 died before the month’s end, according to data supplied by the Ministry of Health. “Short-term impacts can cause disability and death. The long-term impacts affect children’s learning and how they perform their activities,” says Dr Agus.

The country began mass vaccinations in January 2021 and paediatricians say inoculating over-12s should be a priority.

In June, President Joko Widodo announced 12 to 17-year-olds would be jabbed after the Chinese Sinovac Biotech vaccine was given the green light for use in children there.

It’s reported a 30% COVID mortality rate among 10 to 18-year-olds contributed to the drug agency’s recommendations.

While Indonesia’s daily infection rates have finally started to drop, for the families who have lost so much, it’s already too late.