A shock study has discovered an “unexpected” origin of COVID-19 in Italy months before the Chinese city of Wuhan reported its first case of the invisible killer disease. COVID-19 has plagued the world, taking the lives of more than a million people after the outbreak was first reported in Wuhan, in central China, in December last year by the World Health Organization.

Italy’s first COVID-19 patient was detected just weeks later on February 21 in a little town near Milan, in the northern region of Lombardy.

A study by the National Cancer Institute of Milan found blood samples, which patients had given to a cancer study, contained antibodies to fight the disease.

It found 11 (six percent) of 959 healthy volunteers enrolled in a lung cancer screening trial between September 2019 and March 2020 had developed COVID-19 antibodies well before February. 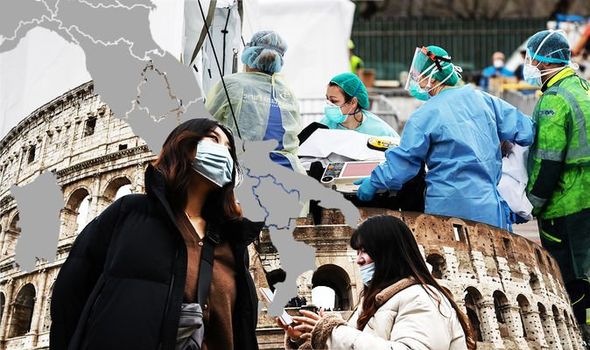 Giovanni Apolone, a co-author of the study, revealed it found four cases dating back to the first week of October were also positive for antibodies neutralising the virus, meaning they had got infected in September.

He said: “This is the main finding, people with no symptoms not only were positive after the serological tests but had also antibodies able to kill the virus.

“It means that the new coronavirus can circulate among the population for long and with a low rate of lethality not because it is disappearing but only to surge again.”

Italian researchers revealed the Mediterranean country reported a higher than usual number of cases of severe pneumonia and flu in Lombardy in the last quarter of 2019 in a sign that the new coronavirus might have circulated earlier than previously thought.

Italy, one of the European countries hit hardest by COVID-19, surpassed the one-million infections mark last week, leap-frogging Mexico to become one of the top 10 worst-affected countries globally.

In Italy, which became a global symbol of the crisis when army trucks were called in to transport the dead during the early months of the pandemic, daily average new cases are at a peak at more than 34,000 last week.

Deaths have been rising by more than 455 per day over the same period, but the rate appears to be picking up, with the health ministry reporting 623 COVID-related deaths last Wednesday – the highest figure since April 6.

For every 10,000 people in Italy, at least 170 are reported as COVID positive and over seven deaths are reported due to COVID.

China alerted the WHO of 27 cases of “viral pneumonia” in the central city of Wuhan, the epicentre of the disease, on December 31, 19.

Authorities shut down a wet market in Wuhan the next day, after discovering some patients were vendors or dealers.

Weeks later on February 2, a 44-year-old man died in the Philippines, the first death outside China.