Children in Spain are to be allowed out of their homes for the first time in more than a month as the Madrid government moved to extend – but also ease – its coronavirus lockdown.

The country’s prime minister Pedro Sanchez said he would seek to continue the state of emergency, aimed at containing the COVID-19 pandemic, until 9 May – but added the total confinement of youngsters will be relaxed slightly from 27 April.

Referring to the change to the coronavirus rules, Mr Sanchez said children will be permitted “to get out of their houses for a period on a daily basis”, although the details still need to be agreed with experts. 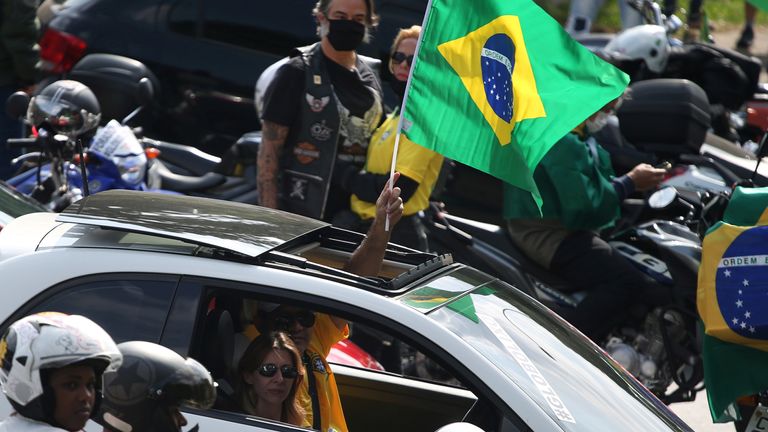 The move follows pressure from regional governments, parents and some teachers to ease the restrictions.

Spain imposed one of the strictest lockdowns in Europe in mid-March, with people only allowed to go out if it was essential.

Unlike many countries, such as the UK, outdoor exercise has not been permitted.

Mr Sanchez said rolling back the national lockdown will only come when the country’s embattled health system can handle any future return of the virus.

He said: “We have left behind the most extreme moments.”

But he added: “These achievements are still insufficient and above all fragile. We cannot put them at risk with hasty solutions”.

It came as Spain’s death rate from the outbreak slowed, rising by 410 on Sunday, down from 565 on Saturday.

It brings the total number of fatalities linked to the pandemic to 20,453 in one of the world’s hardest-hit countries.

The state of emergency extension needs to be approved by the Spanish parliament.

Meanwhile in Brazil, hundreds of people have taken part in demonstrations against the pandemic lockdown measures opposed by far-right president Jair Bolsonaro.

Protesters in lorries, cars and on motorbikes honked horns on the streets of Rio de Janeiro, Sao Paulo and the capital of Brasilia, calling for governors to resign over the restrictions which have forced most businesses to close.

Mr Bolsonaro has been a fierce critic of the states’ stay-at-home rules, arguing that the economic harm could be more damaging than the disease, which he has previously dismissed as the flu.

The protests came just a day after he fired his health minister, who had been promoting the isolation measures.