Leaders around the world are using the pandemic as pretext for seizing virtually dictatorial authority. In the U.S., President Trump said the states had plenty of testing kits, but governors disagreed.

Two months after China brought its economy to a near halt to contain the coronavirus, the country’s mighty industrial machine is showing signs of life. 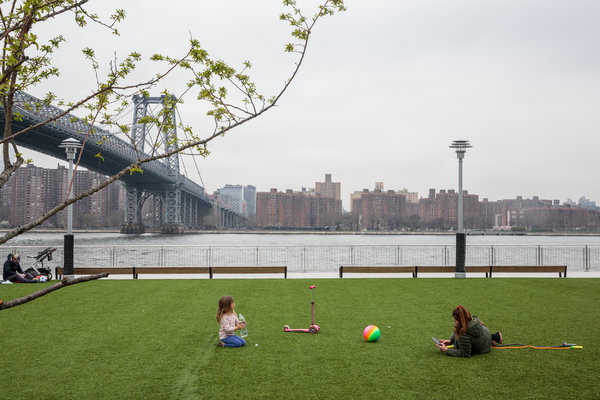 Roughly three out of four Americans are under orders to stay home, or will be soon.

While many states have issued stay-at-home directives to try to slow the virus’s spread — with Maryland, Virginia and Arizona becoming the latest to do so on Monday — in Florida, Gov. Ron DeSantis, a Republican, had resisted the step, favoring local action over statewide mandates.

But on Monday Governor DeSantis said that he would sign an order codifying a patchwork of local rules urging residents in the densely-populated southeast corner of the state — including Miami-Dade, Broward, Palm Beach and Monroe counties — to stay home.

Local Florida governments have taken wildly different approaches to restricting interactions. While the city of Jacksonville shut down its beaches, St. Johns County to the south did not. A striking photo taken over the weekend showed bare beaches on one side of the county line and crowded sand on the other. (St. Johns County later closed its shoreline.)

Roughly three out of four Americans are or will soon be under instructions to stay indoors, as states and localities try to curb the spread of the coronavirus before their hospitals are overwhelmed.

Virginia and Maryland both issued new statewide orders on Monday, and Arizona’s Republican governor, Doug Ducey, directed his state’s residents to stay home until the end of April.

“We are no longer asking or suggesting that Marylanders stay home — we are directing them to do so,” Gov. Larry Hogan of Maryland, a Republican, said.

And in Virginia, Gov. Ralph Northam, a Democrat, ordered all residents to stay home, closing the state’s beaches and campgrounds and insisting that people only go out for food, supplies, work or medical care.

“I want everyone to hear me: Stay home,” Mr. Northam, a Democrat, said. 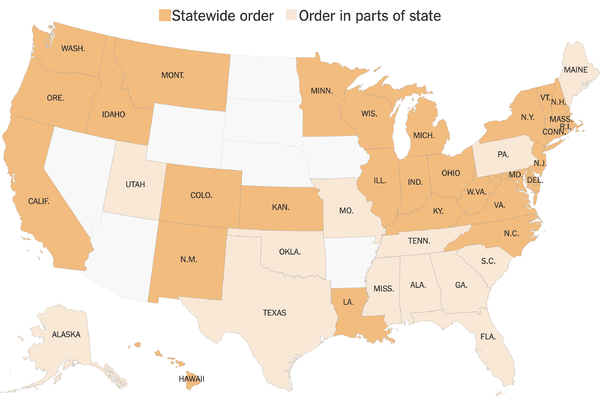 In an attempt to stop the spread of the coronavirus, more than half the states and the Navajo Nation have given directives, affecting about three in four U.S. residents.

Israel’s prime minister has shut down courts and begun an intrusive surveillance of citizens. Chile has sent the military to public squares once occupied by protesters. Bolivia has postponed elections. In Hungary, the prime minister can now rule by decree.

In some parts of the world, new emergency laws have revived old fears of martial law. The Philippine Congress passed legislation last week that gave President Rodrigo Duterte emergency powers and $5.4 billion to deal with the pandemic.

Even in robust democracies like Britain, ministers have what a critic called “eye-watering” power to detain people and close borders. Invasive surveillance systems in South Korea and Singapore, which would have invited censure under normal circumstances, have been praised for slowing infections.

Governments and rights groups agree that these extraordinary times call for extraordinary measures, and many of these actions are protected under international rules, constitutional lawyers say.

But critics say there are few safeguards to ensure that their new authority will not be abused.

“We could have a parallel epidemic of authoritarian and repressive measures following close if not on the heels of a health epidemic,” said Fionnuala Ni Aolain, the United Nations Special Rapporteur on counterterrorism and human rights.

Listen to the Call: Bullock and Trump Discuss Testing

Gov. Steve Bullock of Montana discussed the difficulty of getting access to coronavirus tests on a conference call with President Trump and other governors.

“Literally, we are one day away if we don’t get test kits from the C.D.C. Then we wouldn’t be able to be tested in Montana. We have gone, time and time again, to the private side of this. The private market, in where the private market is telling us that it’s a national resource that are then taking our orders apart. Basically, we’re getting our orders canceled. And that’s for PPE. That’s for testing supplies. That’s for testing equipment. So, while we’re trying to do all the contact tracing, we don’t have adequate tests to necessarily do it. We don’t have the [inaudible] along the way, and we’re not finding markets to be able to do that. Along the way are private suppliers. So we do have to rely on a national chain of distribution or we’re not going to get it. But we are doing our best to try to do exactly that. Like, Gallatin County would be an example where we have almost half of our overall state’s — those are the positives. We’re trying to shift the supply to really isolate that and do the contact tracing, but we just don’t have enough supplies to even do the testing.” “Right. Tony, uh, you can answer it if you want, but I haven’t heard about testing in weeks. We’ve tested more now than any nation in the world. We’ve got these great tests, and we come out with another one tomorrow where, you know, it’s almost instantaneous testing. But I haven’t heard about testing being a problem.” 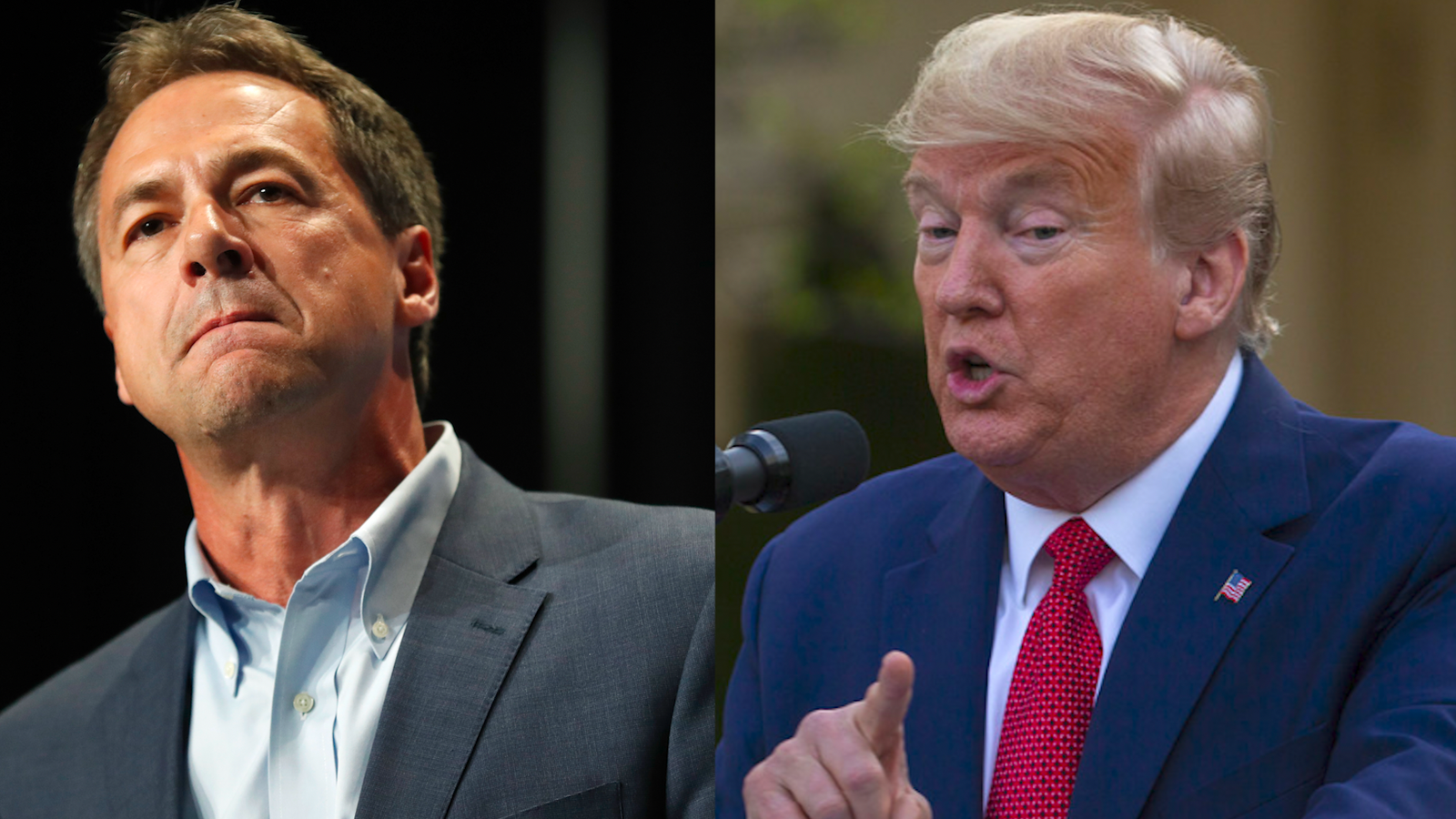 President Trump on Monday expressed optimism about the federal government’s ability to provide adequate testing for the coronavirus and suggested it would soon be producing so many ventilators, masks and other personal protective equipment that it would be able to send stocks of supplies to other countries.

America’s governors painted a different picture on the ground.

In a conference call with governors on Monday, President Trump said that he “hasn’t heard about testing in weeks,” suggesting that a chronic lack of kits to test people for the coronavirus is no longer a problem. Yet one governor said his state was “one day away” from not being able to test anyone at all.

Hours later, Mr. Trump’s comments at a White House Rose Garden news conference suggested he thought the scarcity of ventilators and other supplies, which has become an emergency in some states, will soon be ending.

But in New York, where the state’s deaths from the coronavirus jumped above 1,200 and a hospital ship arrived to ease the pressure on overwhelmed hospitals, Gov. Andrew M. Cuomo warned that the worst of the coronavirus outbreak was yet to come.

In Virginia, Maryland and Arizona, governors from both parties issued new stay-home orders for their citizens.

In Washington, the Food and Drug Administration granted emergency approval permitting the use of two long-used malaria drugs to treat coronavirus patients, and Speaker Nancy Pelosi, Democrat of California, said in an interview that it was only a matter of time before Congress would act on a fourth relief measure to try to contain the economic fallout of an outbreak that now sees three of four Americans under orders to stay home.

And in the nation’s jails, prisoners worried about their health as they wiped down communal phones with prized alcohol wipes and washed down cell bars and table tops with diluted shampoo.

Prime Minister Narendra Modi has ordered a lockdown of India’s 1.3 billion citizens to fight the spread of coronavirus, urging people to distance themselves socially and work from home.

But social distancing means hunger for many in India, with a work force heavily dependent on manual labor. It would be an unheard-of luxury for the ragpicker or street vendor who lives day to day.

About 80 percent of India’s 470 million workers are in the informal sector, lacking contracts and unprotected by labor laws. Many are manual laborers in the fields, factories and streets of India.

We asked people how they were making ends meet as the economy grinds to a halt with the coronavirus pandemic. India reported 1,024 cases and 27 dead as of Sunday.

Ashu, 12, and his two brothers spend their days at one of Delhi’s biggest dumps. They are ragpickers — scavengers who hunt for scrap metal using a giant, rusted sieve to help them sort through the stinking refuse.

What’s he afraid of? ‘The police and not being able to eat.”

If Ashu works really hard, he can earn 53 cents a day. He and his brothers have been unable to go to the dump regularly since the lockdown was announced because if they are caught by the police, they will be beaten.

Amid debate over face masks, Austria says that it will require them in grocery stores.

Austria will require all residents to wear face masks when they shop for groceries starting this week, as a growing number of experts have questioned the prevailing guidance that healthy people don’t need to wear masks.

The World Health Organization asserts that masks should only be worn by people who are sick and those who are caring for them, and that there is little data showing that they protect the general public in everyday life. But some experts and government officials say they could offer some protection.

The debate over protective masks for healthy citizens has created tensions as protective gear, including N-95 masks, has been in woefully short supply for front-line medical workers, leading officials to try to discourage hoarding and panic-buying by people all over the world.

At the same time, some places that adopted nearly universal mask-wearing and intensive social distancing early on, like Hong Kong, were able to contain their outbreaks. George Gao, the director-general of the Chinese Centers for Disease Control and Prevention, has called not wearing face masks “the big mistake in the U.S. and Europe.”

China’s factories are almost fully back to work.

Two months after China brought its economy to a near halt to contain the coronavirus, the country’s mighty industrial machine is showing signs of renewed life, according to official sources.

A measure of factory activity released on Tuesday showed a rebound in March, China’s National Bureau of Statistics said. The organization, which surveys purchasing managers at Chinese factories, said activity rebounded to 52 on its closely watched index, from 35.7 in February.

A number above 50 on the index indicates growing activity, though the figure could overstate the improvement. It does not show to what degree factories have resumed production, meaning those that have opened could still be operating well below capacity.

China’s government has taken a series of top-down measures to get the world’s No. 2 economy humming again. As the number of new infections reported each day has fallen, local officials have become more confident about allowing people to return to work.

But even if factories and workplaces are back in business, that does not mean the economy is entirely back on its feet. In the epidemic’s wake, cash-strapped families may be reluctant to spend. Businesses fear that their partners and suppliers might default on payments for goods and services. Demand for Chinese exports may be weak as the epidemic continues to worsen in many countries around the world.

Nationwide, major industrial enterprises are operating at an average of 98.6 percent of capacity, said Xin Guobin, China’s vice minister of industry and information technology, at a news briefing on Monday. And nearly 90 percent of employees at these businesses are back at work.

Tips for getting through the coronavirus marathon

The experts keep telling us to plan for this to last for a long time. And with many communities a week or more into being homebound, the novelty is beginning to wear off. Here are some tips to help you fight the burnout you are likely beginning to feel, manage your antsy teenagers, and even freshen up your home to make it better suit your new needs.