Indian Prime Minister Narendra Modi has asked the nation’s poorest communities for forgiveness after ordering further restrictions to combat the spread of coronavirus among its 1.3 billion people.

New measures were brought in after days of chaos on the borders of capital territory Delhi, where thousands of economic migrants converged as they tried to get back to their rural eastern villages to see out the lockdown.

Workers have been desperate to get out of Delhi as the restrictions have left them unable to pay rent, and the prime minister acknowledged that poorer people will suffer most from the damage done by the pandemic. In a nationwide radio address, Mr Modi said he understood why they would be questioning a government decision that stood to put them “into so much trouble”, but said the lockdown would help “give India victory over corona“.

The daily wage earners and contract workers trying to get back to their native villages over the weekend walked for hundreds of miles from the more prosperous western states.

Almost 100,000 people – from a sector making up almost 80% of India’s workforce – had gathered at bus terminals and other border points in Delhi, where they were stopped from proceeding any further.

There was no social distancing, nor were many wearing protection from potential COVID-19 infection – defeating the purpose of a lockdown designed to keep the world’s second biggest population indoors.

The chaotic scenes forced the government to arrange thousands of buses to take them home, from where the administration will have the tough task of tracking them down and quarantining them for two weeks. India’s numbers have alarmed the federal government – there are 1,192 positive coronavirus cases so far and 29 reported deaths, but like other countries there are likely many more cases that have not been tested.

Mr Modi’s administration has now directed all state governments to seal their borders and not allow any movement of people outside their homes.

All state governments are also going to set up relief shelters, where migrant workers will be provided a place to stay and given free food during the lockdown.

The prime minister said in his radio address that he was sorry for the inconvenience caused by the lockdown, but that there were no other options left to save the country and its people. Mr Modi has faced criticism for being slow to respond to the virus, and rights activist Harsh Mander told Sky News the government’s “lack of public compassion for the migrant workforce is a failure”.

He said the government had “failed to anticipate” the threat of the virus and described its response as “haphazard, poorly planned” – with “mixed messages” that had caused a “breakdown of trust among this work force”.

“There is a breakdown of trust,” he added.

“It seems the prime minister was only speaking to the middle class who are assured of a salary, have a roof over their head and running water in their homes. The poorest have been thrown under the bus.” 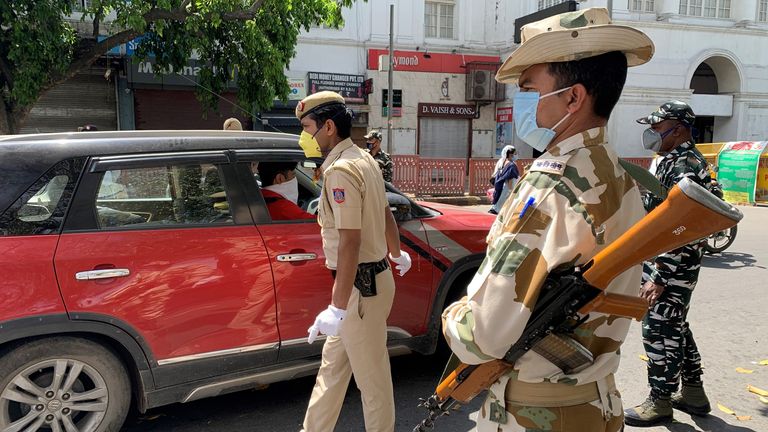 Driving around in Delhi, there is a much larger police presence, with more barricades and more stringent checking.

At one of the checkpoints, Assistant Sub Inspector Gill told Sky News: “We have been given strict instructions to enhance our checking.

“All migrants have to be sent to the shelter homes, no one is allowed to be on the road.”

At another checkpoint, police seized the scooter of a couple who were unable to provide a genuine reason for being on the road, with only those involved in essential services are allowed to be out.

Police and paramilitary forces have been conducting flag marches since the enhanced restrictions were introduced, although the government says there are no plans to extend the lockdown at the moment. Cabinet secretary Rajiv Gauba said he was “surprised” by reports that the lockdown could last longer.

Meanwhile, more than 500 relief camps have been set up in Delhi and the state government is now handing out free food for almost 400,000 people in its shelters.

At the Sarai Kale Khan bus terminal, more than 400 families – a mixture of homeless people, daily wage workers and migrants unable to go back to their villages – are being cared for.

But elsewhere, officials are being criticised for how they are enforcing the lockdown.

In the town of Bareilly in Uttar Pradesh, government workers have been filmed spraying disinfectant over a group of migrants sitting on the ground.

The administration has been criticised for this dehumanising display.