Mr Le Maire told a Senate hearing by teleconference on Monday: “This crisis will be violent, global and last a long time.” The eurozone’s second-biggest economy will likely contract more than it did during the 2008-2009 global financial crisis, he said: “We will probably be at more than the minus 2.2 percent (slump) in 2009. This shows the magnitude of the economic shock we are facing.”

The government said last month in an emergency budget meeting the economy would likely contract by 1 percent in 2020, but has since admitted it would have to adjust that figure.

The French economy is currently running at two-thirds of normal levels, and each month of government-imposed confinement could knock 3 percentage points off of growth, the INSEE official statistics agency said last month.

Mr Le Maire also said that France cannot accept a European response to the coronavirus crisis that does not include long-term recovery measures like a joint EU solidarity fund.

The eurozone will “explode” if member states “differ too widely in terms of their economic response” to the health crisis, he said.

Earlier on Monday, Mr Le Maire told France 2 television that the coronavirus outbreak would “cause considerable (economic) damage” to the bloc, but that “Europe can emerge stronger from this crisis”. 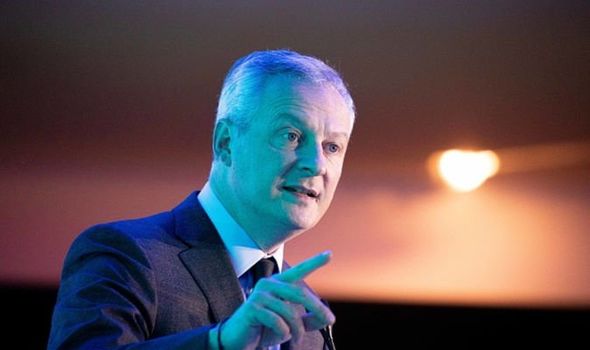 EU leaders have asked their finance minister to come up with plans to cushion the economic blow from the pandemic, after they failed to overcome divisions last month over whether a response should be financed by joint borrowing.

The finance chiefs are expected to discuss on Tuesday three quick options to support the economy: the use of the European Stability Mechanism bailout fund, the European Investment Fund and the European Commission’s short-time work scheme.

Mr Le Maire told reporters ahead of the meeting: “There is an agreement emerging on the first three options, but that is not enough.”

Mr Le Maire has also proposed a fund worth “several hundred billion euros” financed by joint borrowing that would be used to fund public spending for the economic recovery after the current downturn.

Countries in northern Europe, including Germany, Austria, Denmark and the Netherlands, refuse to back an agreement that would allow joint borrowing over fears it would make them liable for the debts of poorer states in the south.

But Mr Le Maire hopes to overcome that opposition by proposing that the fund’s lifespan be limited to five to 10 years and be strictly focused on financing the recovery.

Countries could tap into the fund based on how much they had suffered during the crisis and contributions would be based on the size of each country’s economy.

The rate of increase in fatalities in France – now at almost 9,000 – sped up again on Monday after several days of slowing, however, the number of people being moved to intensive care units continues to decelerate.

The total number of infections increased by 5,171 over the last 24 hours to 98,010, the country’s health chief Jerome Salomon told reporters. This means France will likely become the fifth country, after Italy, Spain, the United States and Germany, to cross the 100,000 threshold.