The draw for the last 16 of the Champions League has been redone following a “technical problem”.

It came after a mistake involving Spanish giants Atletico Madrid and English sides Liverpool and Manchester United, regarding who the teams were eligible to be drawn against.

UEFA said: “Following a technical problem with the software of an external service provider that instructs the officials as to which teams are eligible to play each other, a material error occurred in the draw for the UEFA Champions League Round of 16.”

“As many of you will have noticed there were some errors made in the original draw caused by a malfunction of the software which went through an outside provider to tell us which teams are eligible to be drawn against each other,” he said.

The results from the new draw:

“After the draw, the external independent auditor couldn’t guarantee the problem with the IT did not exist from the start and as a result, the full draw needs to be redone.”

Manchester United have been handed another tough tie in the last 16 of the Champions League after now being paired with Atletico Madrid.

Manchester City will take on Sporting Lisbon, while Liverpool will head to Inter Milan.

Defending champions Chelsea will face Lille – the only fixture to be a repeat of one drawn earlier on Monday before that result was declared void due to software errors.

Confusion began in the first draw when United were paired with Villarreal – a side they had already faced in Group F.

Teams who met in the group stages are supposed to be kept apart in the last-16 draw.

On the second attempt, Manchester City were paired with Villarreal.

Atletico Madrid were the next side to be drawn, but the issues only continued when Mr Marchetti mistakenly announced that Manchester United did not have the possibility of facing the Spanish team because “they were already drawn”.

But as United’s drawing was a mistake, they should still have been potential opponents for Atletico.

The situation became more troublesome when UEFA’s head of club competitions Michael Heselschwerdt began collecting balls to put in the pot but took a ball from Liverpool’s container rather than United’s. 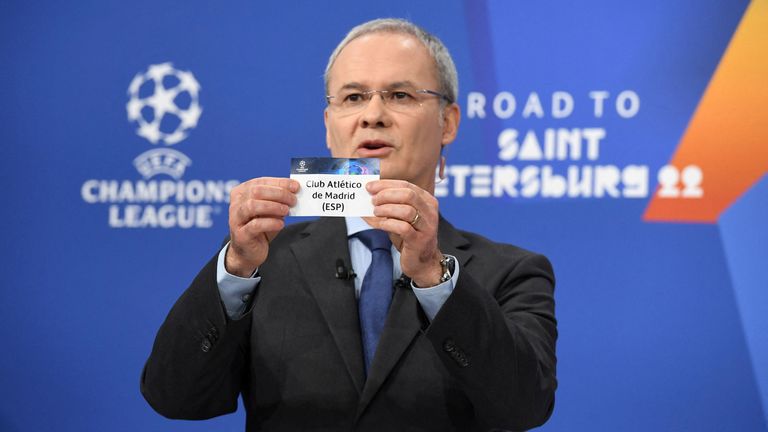 Jurgen Klopp’s side has already faced Atletico in the group stages and so should not have been an option.

Atletico were ultimately paired with Bayern Munich, but given the series of errors, UEFA had no choice but to declare the draw void.

Manchester City manager Pep Guardiola backed the decision to repeat the draw, saying: “I think that’s fair. It was a mistake. These kinds of things sometimes happen, especially the players and managers, so sometimes UEFA too.”

The original draw would have resulted in these fixtures: