CCTV has captured the moments that a woman was dragged along a road by a car after robbers stole her handbag in California.

It was the latest in a series of attacks against people of Asian descent in the San Francisco Bay Area and in other parts of the US.

Eric Nghiem said his Vietnamese wife Jenny was wearing her handbag across her body as she walked to a supermarket when a thief grabbed it and jumped into the car on Wednesday afternoon.

The footage shows a white vehicle with both its right-hand side doors open as it drives slowly down the road in Oakland, in the Bay Area. 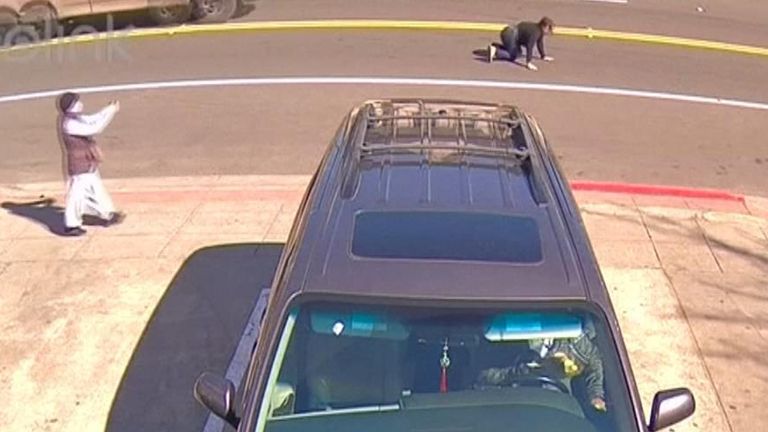 Mrs Nghiem can be seen being dragged on her front as she hangs on to her handbag strap being held by a man in the front passenger seat.

She was pulled along for about 46 metres, according to local reports, before she let go and the car doors were closed then the robbers drove off.

The victim then got up and walked to the side of the road where shocked looking pedestrians checked if she was alright.

Mr Nghiem said his wife is sore and bruised and has been left mentally shaken by the incident in Oakland’s East Lake.

At least 32 Asian Americans in the Bay Area have been assaulted or robbed since the start of 2021, the San Francisco Chronicle has reported.

Cynthia Choi, co-executive director of Chinese for Affirmative Action in San Francisco, told the paper that Asian Americans are often targeted around Chinese New Year because thieves believe they might be carrying cash for the lucky envelopes many people exchange during that time.

Police have stepped up their patrols and volunteers have increased their street presence.

Oakland Police Department said the robbery is under investigation.

It remains unclear whether the victim was targeted because of her race.