OTTAWA (Reuters) – Canadian Prime Minister Justin Trudeau is soaring in the polls amid widespread approval of his handling of the coronavirus pandemic but has little chance of cashing in soon on his popularity with voters, insiders and analysts say. 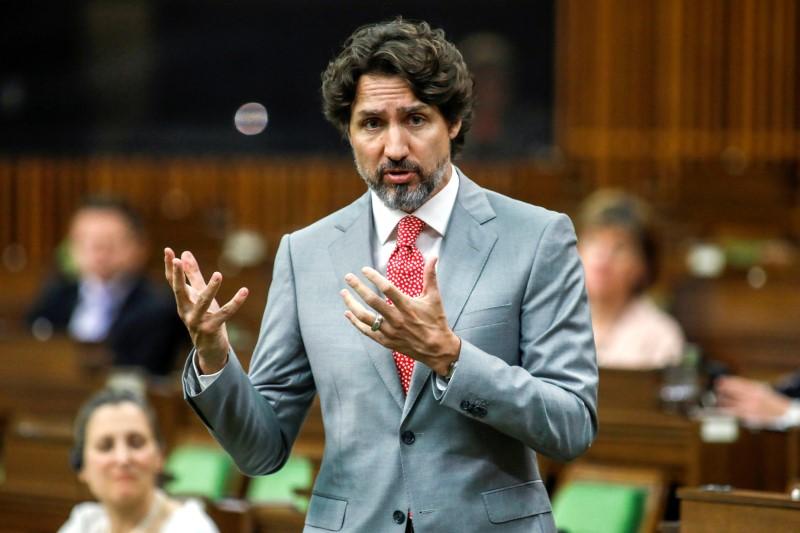 Trudeau – working with powerful Conservative provincial premiers who usually oppose him – avoided a U.S.-style battle over how to tackle the outbreak, in part by promising hundreds of billions in spending.

But six sources within the federal and provincial governments with direct knowledge of bilateral relations say the consensus between Ottawa and the regions is starting to fray as they begin to reopen for business and a possible “second wave” of contagion looms.

Ottawa is already on track to spend C$300 billion, or 15% of gross domestic product, on wage subsidies, monthly income support for the jobless, and other measures meant to help bridge the crisis.

“I heard from a federal official that… they are terrified of the second wave because they will be out of money to give away,” said a provincial source familiar with communications between the two levels of government.

The heavily indebted provinces have more trouble raising money than the federal government and will need the taps left open if there is another round of lockdowns, said a source in a second province.

It is unclear if the government has budgeted for this eventuality. A spokeswoman for Finance Minister Bill Morneau, when asked how much cash would be available, said Ottawa “will continue to constantly monitor economic developments and take appropriate action.”

Trudeau’s Liberals, who barely held onto power in an election last October, would crush their federal Conservative Party rivals if another vote were held now, several polls show.

An Angus Reid poll published on June 1 put the Liberals at 37%, a 6 percentage point lead over the Conservatives.

Trudeau now has a minority government and depends on opposition parties to pass legislation. But with more than three years left in his mandate, “the last thing anyone is thinking about” is an early election, a senior government official said.

The reason a snap election is unlikely is that the Liberals would be seen as taking advantage of a crisis, Ekos pollster Frank Graves said.

“The public would be very angry at the idea that we need an election right now,” said Graves, who added the Liberal bounce is ephemeral because the longer the crisis goes on the more public unhappiness will mount.

Indeed, some Liberals are concerned the 48-year-old Trudeau, a progressive leader viewed as a counterweight to U.S. President Donald Trump, will never be able to cash in on his windfall in the polls.

“If this (outbreak) continues for two years, people are going to be so fed they up they might be looking for a real change,” said a senior Liberal advisor.

For now, the new political dynamic has served Trudeau well. As the premiers delivered the bad news on social restrictions and shutting down businesses, Trudeau made announcements about federal help and funding.

“He doesn’t wear the hard decisions but he also gets to be something of a savior,” said the first provincial source, predicting there was little chance the new-found camaraderie would be permanent.

The same source noted that premiers were irritated by Ottawa’s refusal to give them advance warning of announcements. Canada’s 13 provinces and territories have already begun to loosen quarantine restrictions as Trudeau has repeatedly cautioned against lifting them prematurely.

“Where the risk lies is what happens after the immediate coming weeks and months,” said the second provincial source.