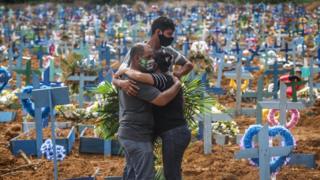 Brazil has reported more than 1,000 deaths in a single day from coronavirus for the first time amid warnings the outbreak is weeks away from its peak.

The country has 271,628 confirmed cases but the true number is likely to be higher because of insufficient testing.

Far-right President Jair Bolsonaro has repeatedly played down the risks of Covid-19.

On Tuesday he again defended use of the unproven drug chloroquine as a remedy, despite alerts it may be unsafe.

Mr Bolsonaro’s repeated defiance of public health expert advice on Covid-19 has led to the resignation of two trained doctors as health minister in the past month.

There is concern about the rapid spread of the virus in poor areas and indigenous communities which are more vulnerable to disease.

What is the situation in Brazil?

The number of confirmed cases is fewer only than in the US and Russia and is expected to rise even further as the outbreak is still weeks away from its peak, health experts say. On Tuesday, the country’s health ministry confirmed 1,179 new deaths, taking the total to 17,971.

In São Paulo, Brazil’s largest city with about 12 million residents and one of the hardest-hit places, a five-day holiday started on Wednesday in an effort to curb the spread of the virus.

Earlier this week Mayor Bruno Covas warned the health system could collapse in two weeks, and accused those who flouted lockdown rules of playing “Russian roulette” with people’s lives.

In an interview broadcast on Facebook, Mr Bolsonaro said Interim Health Minister Eduardo Pazuello – an active-duty army general – would issue new guidelines on Wednesday expanding the recommended use of the anti-malarial drug chloroquine in the treatment to Covid-19.

So far, there is insufficient evidence from medical trials that chloroquine – and a related drug hydroxychloroquine – is effective to either prevent or treat the virus. There are also risks of serious side effects, including renal and liver damage.

“What’s democracy? If you don’t want it, you don’t do it. You’re not forced to take chloroquine,” President Bolsonaro said. “Those who are on the right take chloroquine. Those on the left take Tubaína,” he joked, referring to a popular soft drink. The president did not comment on the deaths. 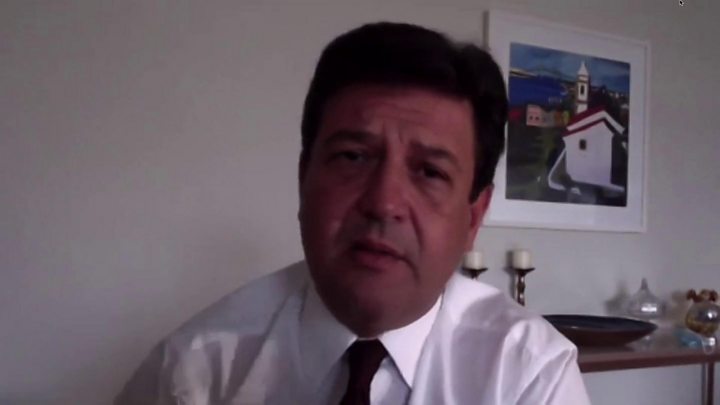 Divisions over the use of chloroquine were reportedly the main reason behind the resignation of Nelson Teich as health minister last week. Mr Teich’s predecessor, Luiz Henrique Mandetta, was sacked by President Bolsonaro after they disagreed over social-distancing measures.

Meanwhile, US President Donald Trump, who Mr Bolsonaro has previously described as his “idol”, told reporters he was considering a travel ban from Brazil.

“I don’t want people coming over here and infecting our people. I don’t want people over there sick either. We’re helping Brazil with ventilators… Brazil is having some trouble, no question about it,” Mr Trump said on Tuesday, a day after announcing he was taking hydroxychloroquine preventively.

How is President Bolsonaro handling the crisis?

He continues to call for lockdown measures imposed by local authorities to be lifted, arguing that they will wreck the economy. The president also accuses state governors and mayors of using the issue for political gain as many who have taken stricter measures oppose his government.

Despite the rapidly rising infection rate, the president says most people, including himself, have nothing to fear from the virus. He has dismissed the risks and compared Covid-19 to “a little flu”.

But Mr Bolsonaro’s focus on minimising economic disruption has been welcomed by many. Supporters have organised anti-lockdown rallies, some of which the president attended, ignoring recommendations of his own health ministry for social distancing.

Shortly after the record death toll was announced on Tuesday, a new row emerged over a message the Brazilian government press office posted on Twitter. Entitled “Life score”, it highlighted the number of people being treated or who had recovered from the virus without mentioning those who had died.

Mr Bolsonaro and some of his ministers have criticised the media for what they describe as negative coverage with a focus on the number of victims. At least two journalists have been attacked in recent pro-government protests in the capital, Brasília.