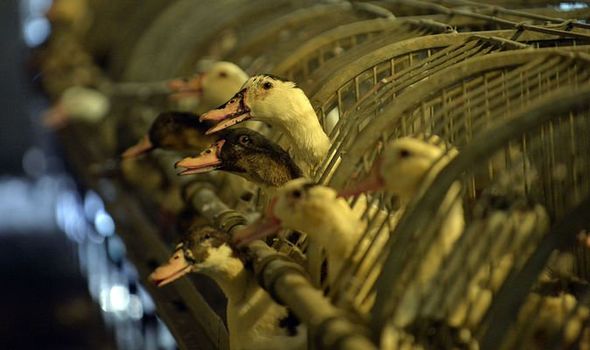 The “highly contagious” H5N1 virus was detected in the Landes region, in the south-west of France, near the border with Spain. Yesterday (Tuesday), the UK Government said that it had identified the avian influenza in commercial poultry in Lincolnshire and Norfolk.

The new discoveries in Landes bring the total number of affected farms in the district to seven, according to French media.

Five of them are said to be located in Mant and one in Castelner – regions bordering the Atlantic Pyrenees.

Another outbreak of the bird flu was confirmed on Friday in nearby Malaussanne.

Marie-Hélène Cazaubon, president of the Landes Chamber of Agriculture, reportedly said all the ducks on these farms “sheltered indoors since the beginning of their rearing”.

They were slaughtered as soon as the first suspected cases appeared on Friday.

Ms Cauzaubon, herself a duck farmer, added: “Having animals under cover does not prevent the introduction of the virus [into the farms] but reduces its spread.

“We must be very vigilant, but also remain confident, because we are not in the same situation as the previous crisis.”

A control zone has since been put in place in 34 parts of the region, including a 3km protection zone and a 10km surveillance zone around the outbreaks.

The first case in the Landes region was confirmed on December 19 in Hastingues.

It followed reports of outbreaks in neighbouring regions.

The outbreaks were said to have been caused by migratory birds coming into contact with poultry stock.

The virus was first identified on November 26 in Warhem, near Dunkirk in northern France.

According to the UK Government, as of December 28 the H5N1 virus had been identified in poultry near Watlington, Kings Lynn and West Norfolk, as well as North Somercotes, Lincolnshire.

It noted that all birds on the infected premises would be humanely culled.

There are currently 57 cases of avian influenza in England.

There was also one case in Wales, and two cases in Scotland.

According to the UK Health Security Agency says that avian influenza is primarily a disease affecting birds.

As such, the risk to the health of members of the general public is “very low”.

The Food Standards Agency has said that based on the current scientific evidence, bird flu also poses a very low food safety risk for consumers.

Properly cooked poultry and poultry products, including eggs, are said to be safe to eat.