Britain will be hit by “heavy rains” and “gusty winds” in the next 36 hours but there will then be “some sunshine returning”, meteorologist Carol Kirkwood has said. There will be disparity between the north and south of the UK over the next two days as a group of clouds will protect the Scotland and Northern Ireland from the colder temperatures, though there will be some “showery outbreaks of rain”, while in the south, it will be “cold and frosty for some”. Ms Kirkwood added that through the week, a “band of rain will sink steadily southwards” before eventually being swept away by the wind to reveal sunshine, although it will still be cold.

Ms Kirkwood said: “We’re going to have sunshine today but some of us have got some rain though and that’s the way it is going to be this week.

“The other thing you will notice if you are stepping outside this morning and you have clear skies, it is cold.

“In rural areas, it is cold enough for some frost. Out towards the west, where we have got some cloud, temperatures are significantly higher.

“So, it’s cold, it’s frosty for some, and we are looking at some patchy mist and fog. 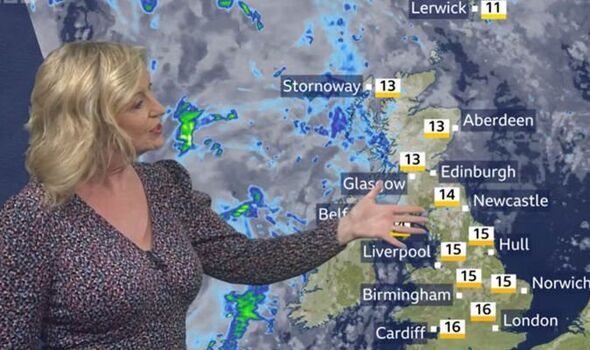 “At the other end of the country, in north western Scotland and Northern Ireland, we have got more cloud and some showery outbreaks of rain.

“It will be breezy, also, although parts of eastern Scotland and eastern Northern Ireland will see something brighter.

“Come south across the west of England and also south across Wales, there is more cloud, hence the higher temperatures, but where we have got the clearer clouds, that’s where we will see the sunshine from the word ‘Go’, the fog and the mist lifting quite quickly.

“Now as we go through the day, if anything, we’ll see some heavier rain coming in across the west. 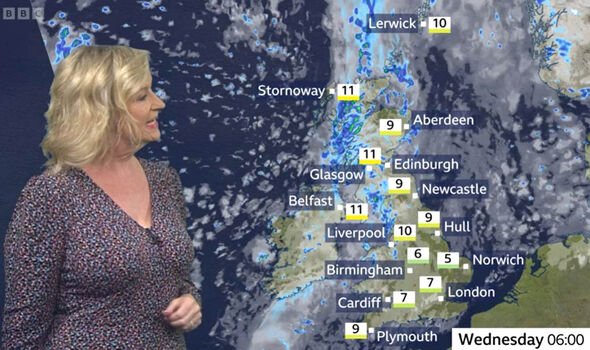 “We could see the odd spot getting through across the Pennines, northwest Wales, but most will miss it. Temperatures around 11 to 16 degrees.

“Through this evening and overnight, once again in rural areas in the south, temperatures will fall to around two or three degrees, some mist and fog patches forming, but in the north and the west, we have more rain coming in. Gusty winds, as well, for a time, especially across the western isles.

“Through tomorrow, this band of rain sinks steadily southward, weakening all the time.

“Ahead of it, we’ll start with some sunshine but the cloud will build with a few showers, and then behind it the wind will ease and we will see some sunshine returning. Temperatures will be around 12 to 18 degrees.” 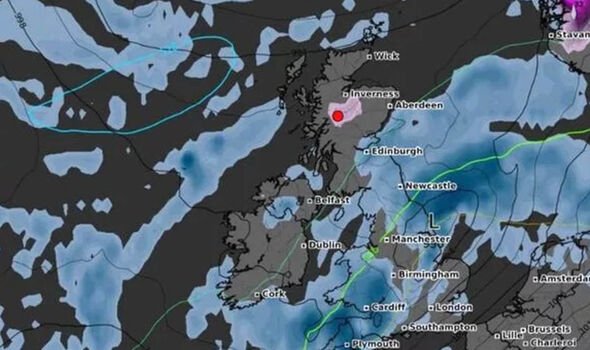 As the cloud cover shifts southward, meteorologists have suggested that parts of the UK could experience their first snowfall of this winter.

Maps from WXCharts reveal snow could fall across parts of Scotland at the end of this week.

It shows snow incoming in an area between Fort William and further north towards Inverness, early this Saturday morning.

According to the forecast, snow will fall from around midnight on Friday, and continue throughout the following week.