The BBC Weather forecaster warned temperatures will begin to drop this week after days of mild temperatures above-average levels for this time of the year. Carol Kirkwood said the relentless rain that hit the country in the past few days will finally ease away, aside from some showers in Scotland. She said: “The reason it is wet in the south is because of this area of cloud named by the Spanish Met Service as Storm Barbara. It is, of course, an area of low pressure and we will be seeing the remnants of it today.”

She added: “For many of us is still mild for this time of year but not as mild as yesterday when the temperatures reached 19C at Kew Gardens.

“This evening and overnight, you can see how this band of rain eventually moves away, some showers left in its wake with rain left in parts of Scotland rotating around the area of low pressure and a lot of cloud, perhaps clearer skies in the south.

“With the night, temperatures falling to between 7C to 11C.

“On Thursday, we still have the remnants of the low pressure producing rain across Scotland but look at the isobars widening, a ridge of high pressure builds in, which doesn’t mean wall-to-wall blue skies.

“This rain in Scotland eases through the afternoon, the wind won’t be as strong.” 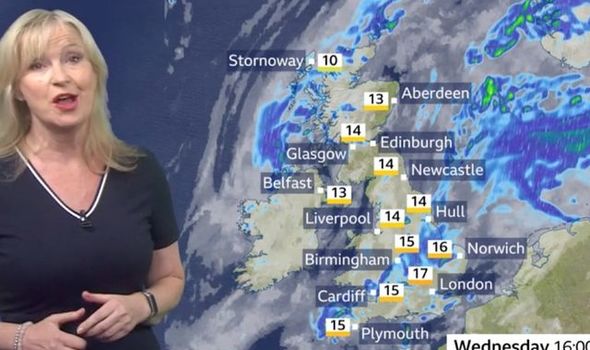 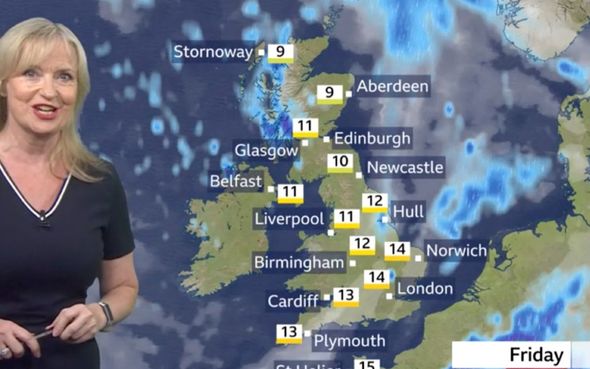 Temperatures are set to continue to plummet towards the end of the month, with a chance of snow showers brought in by cold air from Canada.

The freezing air is set to move in from Monday October 26, prompting vigorous areas of low pressure and unsettled conditions across the UK.

Northern parts can also expect snowfall from October 27, which could last for over a week.

BBC forecasters warn the period will be markedly unsettled, as a strong jet stream over the north Atlantic heads towards the UK.

This will coincide with a cold plunge of air moving in from Canada and the USA.

The forecasters said: “The cold air over Canada will contrast with the much warmer than average sea surface temperatures off the east coast of Canada and over the north-west Atlantic.

“Strong horizontal contrasts in temperature here give the jet stream above some added strength.”

The cold plume is set to prompt heavy cloud, spells of rain and strong winds.

Heavy rainfall is expected for the south of the UK but parts of inland could see dry interludes. 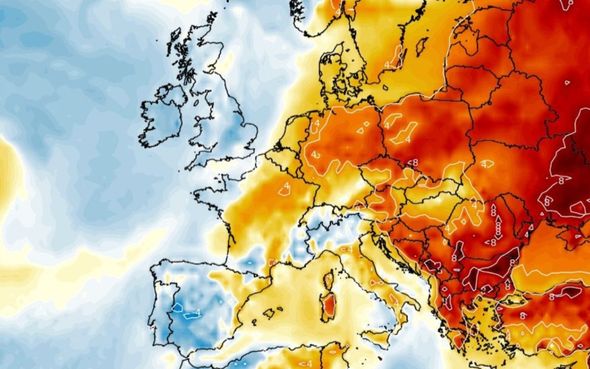 Weather maps from WXCharts show heavy rainfall is expected over much of England, Wales and Northern Ireland on Tuesday.

The chart shows the weather front will move in from the south west and make its way north.

The west of Scotland may be drier than is typical at this time of year, due to the low pressure areas displaced further south.

As a result, BBC forecasters said: “Western Scotland will end up with easterly winds and reduced rainfall, compared with a normal October unsettled spell.”

But the west of Scotland is expected to be hit by snowfall from Tuesday 27.

Snow charts from Netweather show there is a high chance of snowfall by the early evening.