BBC Weather’s Carol Kirkwood warned a front carrying heavy rain will be slowly moving in over the UK through Tuesday evening after a mostly dry day. Weather maps have shown outbursts of rain will first hit Northern Ireland, with weather across the rest of country increasingly turning windier and ranier. Ms Kirkwood said: “The other thing to note is the isobars across the Irish Sea and across the far north of Scotland.

“We’ve seen a lot of rain in Northern Ireland and Scotland through the night but 75mm, that’s over 3in, has fallen in Tyrie and a band of rain also moving eastwards across England, which will more or less clear into the North Sea in the next couple of hours.

“Behind it, some brighter skies, still a fair bit of cloud with some sunshine. Our rain is retreating into the north of Scotland and then all these showers rotating into the centre of that area of low pressure. Once again, some of those could be heavy and thundery.

“This afternoon through the Channel Islands, through southern England and a lot of dry weather. One or two showers dotted around here and there through Wales in through central parts of England. Windy through the Irish Sea and areas adjacent to it.” 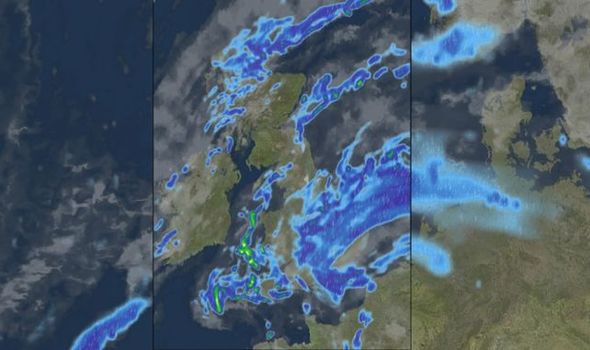 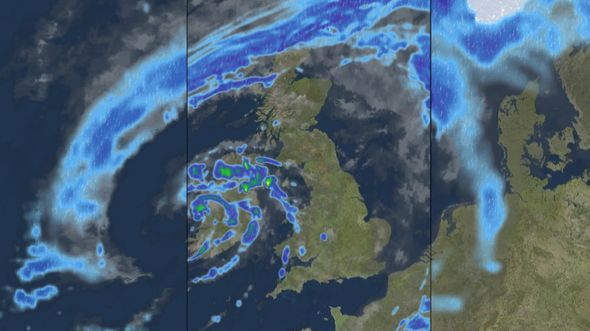 Ms Kirkwood continued: “And then we’re running into the heavier showers which could be thundery across parts of Scotland, northwest England and also parts of Northern Ireland.

“To the north of that, some brighter skies and then we run back into the stronger winds and the rain across the far north of Scotland.

“But look at these temperatures. After a mild start of the day, it’s going to be a mild day generally, 13C in Aberdeen, 15C in Belfast, 17C in Birmingham and 19C in London.”

The first round of rain pushed the Met Office to issue a yellow warning set to cover some areas of Scotland and Northern Ireland throughout Tuesday. 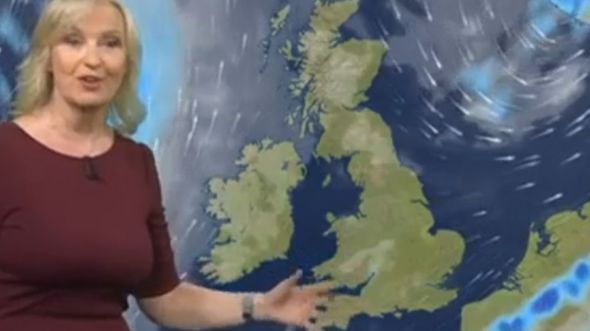 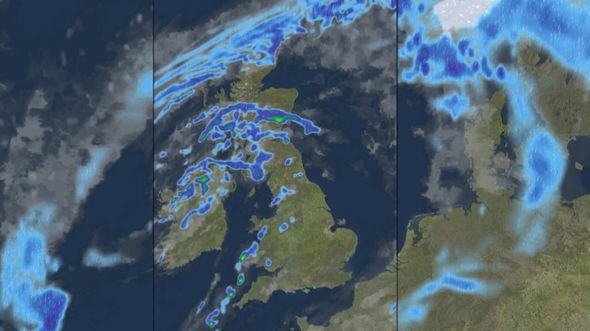 The Met Office has warned Scotland regions could see as much as 75mm of rain over hills and mountains.

Ms Kirkwood also warned showers will persist overnight across northern regions as she forecast a further rain-bearing front will be moving in from France.

She added: “Through this evening and overnight we continue with the showers and the rain across the far north of the country.

“Showers getting into the west. We’re pulling in some heavier rain moving in across southern and southeastern areas.” 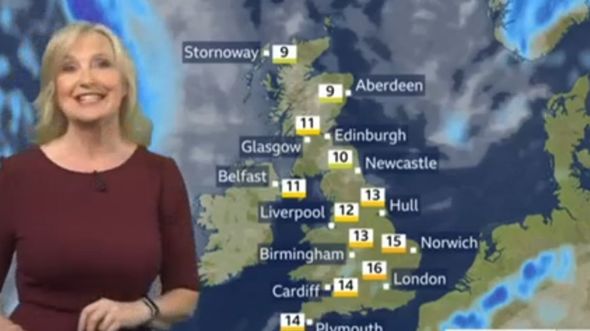 Forecasters have warned a weather front named Storm Barbara could disrupt conditions in the UK with strong winds and rainfall.

The Met Office said it is carefully monitoring the progress of the storm, as its development os “still relatively uncertain”.

Frank Saunders, the Met Office Chief Meteorologist, said; “Tuesday a low-pressure system, seperate to Storm Barbara, will cross Ireland and Northern Ireland bringing gale or even severe gale force winds to some exposed parts of the west and South West of the UK.

“As we look ahead to the rest of the week, we are expecting rain or showers for many areas on Wednesday, possibly heavy and blustery in the South East. It will be quieter on Thursday but more unsettled from Friday, with spells of wet and windy weather moving in from the west.”