BBC Weather meteorologist Carol Kirkwood warned downpours will be plaguing most of the country throughout a rather “gusty” Monday. Ms Kirkwood said the challenging conditions are the result of a new Atlantic weather front engulfing the UK during the day, bringing in heavy rain as well as pushing temperatures down as we head into the evening. The BBC forecaster said: “For some of us it’s a chilly start, for many of us it’s a dull start.

“We’ve got some rain in the west and that’s going to be moving eastwards as we go through the day, although in some parts of the southeast it’s brighter.

“But having said that, it’s not going to last terribly long. What’s happening is we’ve got as little ridge of high pressure in the east but low pressure released, and we’ve got a new weather front coming in.

“That’s what’s introducing the rain. You can see it’s been raining already in some western areas through the course of the small hours of this morning.

“All of this is going to migrate eastwards through the day, then behind it, it should brighten up.” 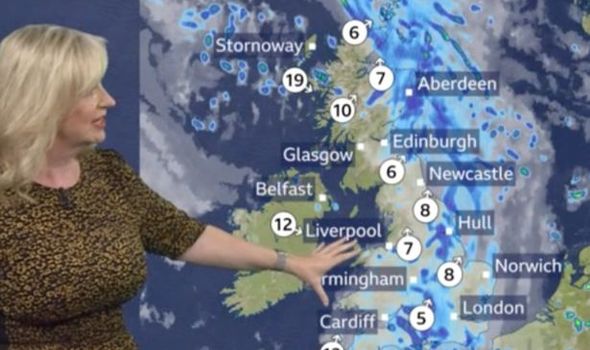 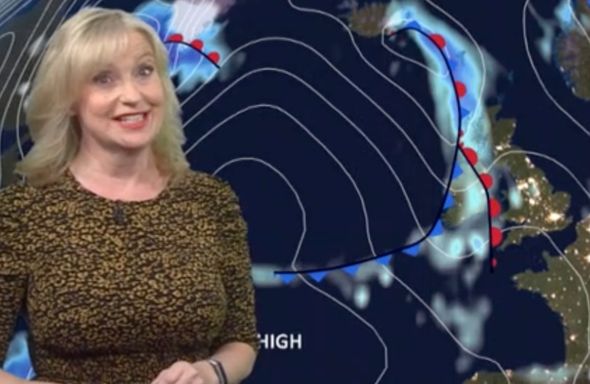 Ms Kirkwood continued: “There’s a lot of cloud to start with, we’ve got this rain, it’s not particularly heavy. It will tend to fragment as we go through the day but, in the west, it will be brightening up.

” For the outer Hebrides, for example, for Northern Ireland, eventually northwest England, even western parts of Wales and the southwest.

“These white circles indicate the average windspeed but it’s going to be fairly gusty today for some areas, with gusts as much as 50mph around the outer Hebrides.

“Temperatures 8C to about 14C so nothing special and it will feel cool in the wind and rain.” 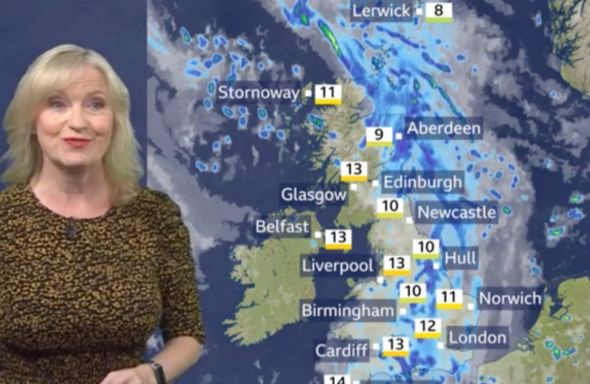 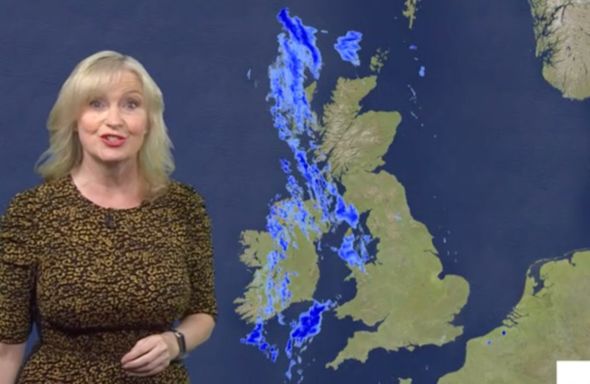 Temperatures are expected to plummet further down into frost territory during the evening despite the rain moving on into the North Sea.

Ms Kirkwodd said windy conditions are expected to persist, adding: “Through this evening and overnight, there goes the rain into the North Sea but look how it becomes ensconced in the southeast.

“And if we follow that weather front round, it brings more rain into parts of Scotland and also parts of northeast England. Still, a brisk wind, still a lot of showers coming in and out in western areas, some of those could be heavy and thunder.

“And where we have some clear spells, particularly in the north of the country, temperatures could fall down low enough for a touch of frost.” 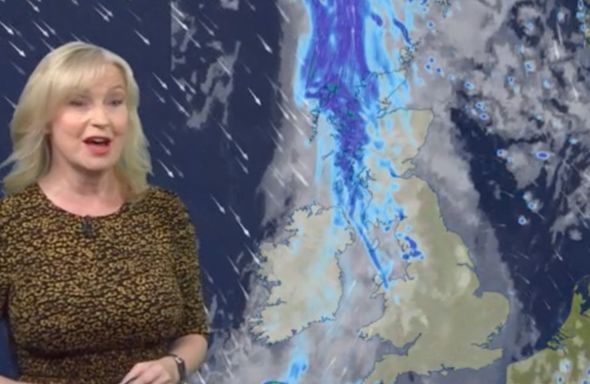 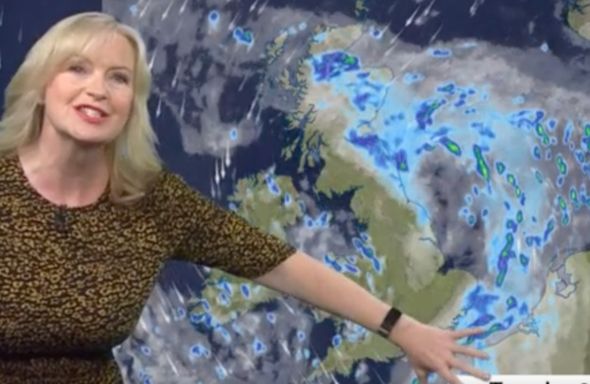 Low pressure will continue to be in charge through Tuesday, with further rainfalls forecast for southeast England as well as Scotland.

“And we’ve got another one brining some showers in across parts of Wales and southwest England. The rain in the southeast starts to migrate westwards towards the Midlands, and where the rain is coming in across Scotland, it pushes into northern England into other parts of the north of England.

“North of that, we’re looking at bright spells, sunshine and showers. Still a brisk wind, temperatures 10C to about 14C.”