BBC Weather meteorologist Carol Kirkwood warned of a foggy start of the day for most of the UK, with Scotland and Northern Ireland also seeing a touch of frost during the early hours. During the day, Ms Kirkwood said temperatures are forecasted to rise, reaching as high as 23C in some areas of southern England and remaining well into double digits across the rest of the country. The BBC Weather forecaster said: “This morning if you’re stepping out is not a cold a start of the day as it was yesterday.

“Having said that, if you are in parts of southern Scotland or northern England, there’s a touch of frost here and you may well have had a fabulous view of the supermoon here.

“Today’s weather is generally sunny spells, feeling warm with the exception of Scotland and Northern Ireland where we’ve got a weak weather front – that’s producing a bit more cloud and also some rain which, through the day, will increasingly turn patchy.

“The other thing we’ve got is some patchy mist and fog across parts of the southeast and East Anglia but that will lift and then a little bit more cloud across parts of Wales and northern England than we’ve seen in recent days. And that cloud here and there thick enough for the odd sharp showers but most of us will miss them altogether.

“As the weather front slips further south through the day, it will brighten up with some sunshine across the far north of Scotland. Temperatures today well up to 23C.” 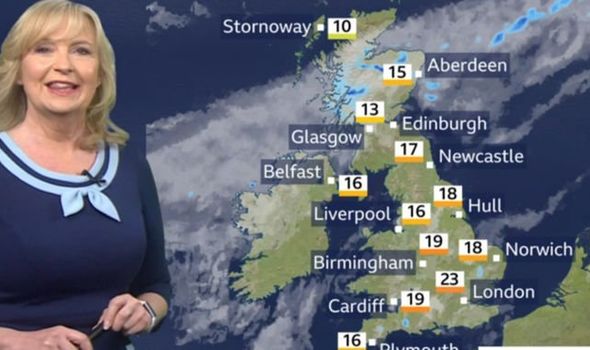 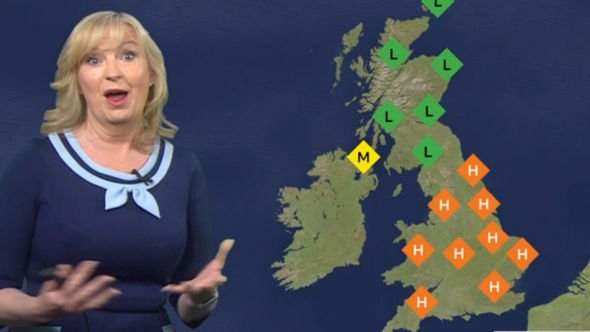 Ms Kirkwood also warned pollen levels will be high in the areas with the highest temperatures and suggested Britons suffering from tree pollen allergy beware on their allotted daily walk.

She continued: “If you are going outside today for, perhaps, your permitted amount of exercise, the pollen levels are high across England and Wales so if you have an allergy to that, do bear that in mind.”

The weak weather front set to stay put across Scotland and Northern Ireland during the day will slowly move southwards, resulting in some drizzle over England and Wales.

The BBC Weather meteorologist said: “For this evening and overnight, our weather front continues to slip southwards across Scotland and Northern Ireland getting into northern England.

READ MORE: Britain to bask in sunshine as shutdown continues 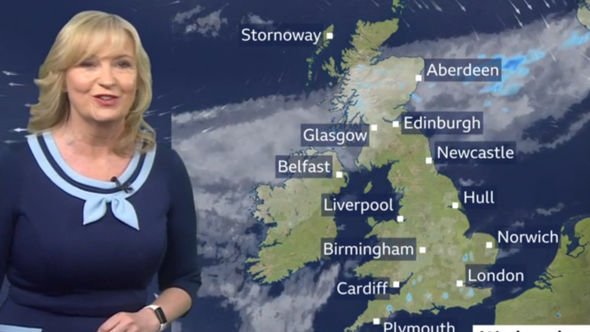 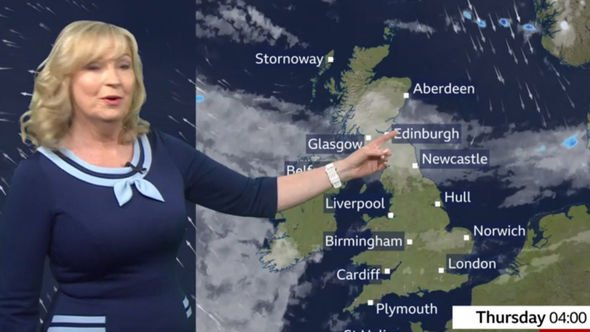 “One or two bits of drizzle or showers mixed in there but clear skies behind it means it’s going to be a cold night, cold enough for a touch of frost in parts of the Highlands.

“But as we come south of that, no such problems, we’ve got 7C, 8C and 9C. But we could have some fog tonight in parts of the Midlands and East Anglia to watch out for tomorrow morning.”

“That’s going to be pushing northwards as we go through the day. 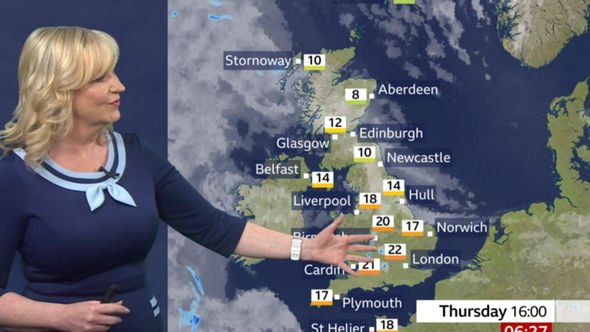 “Again, you might get the odd shower from it but not much more than that and as we come south, we are looking at sunny spells, a bit of cloud, again with the risk of the odd, isolated, sharp shower.

“Wales and the Midlands, perhaps the southeast but feeling cooler with the wind coming in from the North Sea.

“Inland, we’re still looking at temperatures of 22C in London, 12C in Glasgow.”

Weather Outlook forecaster Brian Gaze said: “Warm air is coming all the way from the north-west coast of Africa, with good sunny spells during the next week.”

The predicted temperatures are far above the 11C average for April.