Heavy and persistent rain is set to hit the UK this week threatening the country with the risk of flooding. The weather will be dominated by an area of low pressure in the south where temperatures will cling onto higher temperatures at least until Thursday. Wintry conditions will instead cripple the north with chances of frost and a touch of snow on the hill. BBC Weather forecaster Carol Kirkwood said: “Under clearer skies this evening and overnight in the north it will be cold, some showers, some wintry down to 250, 300 metres.

“At the same time all of this rain moving north and getting into northern England, southern Scotland and Northern Ireland.

“We could see some wintry nets in the hills in northern England tonight.

“We are hanging onto the milder conditions in the far south.

“As we head into Wednesday, low-pressure will be introducing stronger winds into the the south-west and Wales where there’s the potential for some gales. 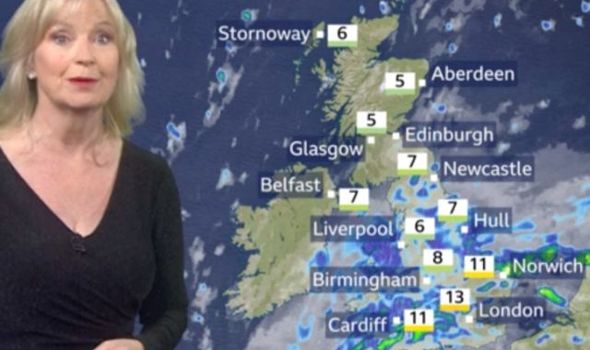 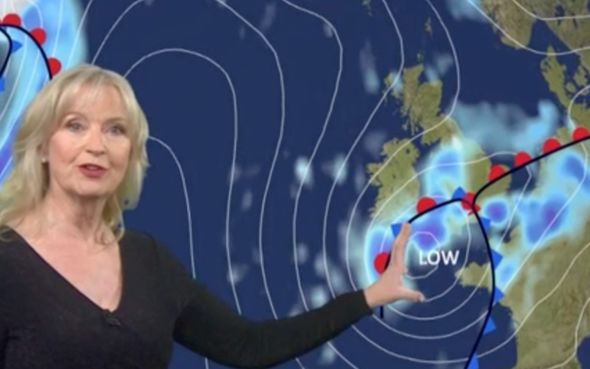 “We are going to cling onto this milder air in the south, the last day.

“Already the cold air getting further south as we pull I na northerly wind. On Wednesday, cloudy and wet for England and Wales, rain heavy and persistent in places.

“Falling on saturated ground so the risk of flooding, windy and the potential for gales in the south-west of England.”

Low pressure is forecast to push across the UK from a northerly direction from Greenland.

The latest snow risk maps from Netweather turn red in the south-west of England on Sunday, December 27, suggesting there is up to 85 percent chance of snow in Bristol, Birmingham and Oxford.

The maps also show more red and green swirls of snow surrounding western Scotland and most of the northeast and west of England on the same day.

Central Scotland is also predicted to be hit with a barrage of six inches of snow on Sunday, according to WXCHARTS’ snow depth models.

But the next day the snow depth could rise as high as 17 inches in the same area.

Temperatures could also plummet to freezing sub-zero levels by the end of the week, with Scotland potentially seeing -5C on Sunday. 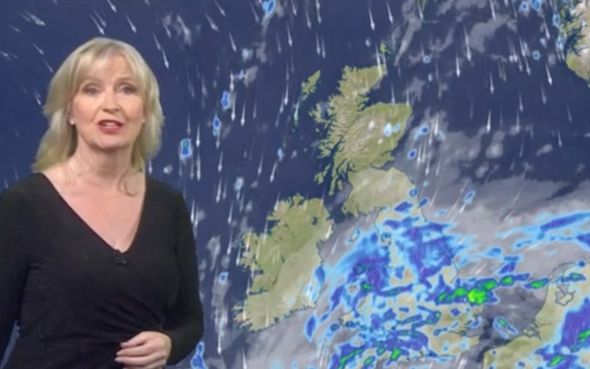 The cold air is expected to sweep down to the north-west regions including Carlisle being blasted with -2C.

Gavin Partridge, owner of GavsWeatherVids, warned cold northerly air from Greenland is expected to be pulled towards the UK.

He said: “The suggestion for December 27 is rain, sleet and snow rotating around.

“Temperatures will also begin to drop on Sunday.

“By Monday, a cold jet stream with a mid-Atlantic ridge is heading up towards Greenland pulling in these cold northerly winds.”