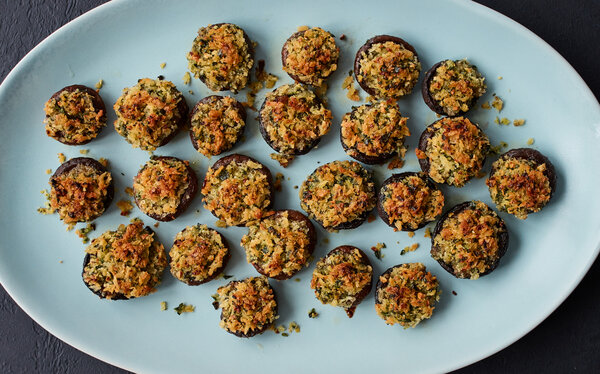 Good morning. I once worked a kitchen station next to a wry Boston teenager who couldn’t believe his good fortune, to work where we did and not where he used to. “Beats stuffing mushroom caps at a sports bar in Allston,” he’d say about three times a day. It put me off mushroom caps for years.

Kay Chun’s bringing me back to them, though, with her awesome new recipe for stuffed mushrooms (above) with an escargot-flavored filling — shallots, parsley and lots of garlic with buttery crumbs — that really evokes the classic French dish, though with no snails. (“Escar-no,” said my colleague Tejal Rao, when we first heard about it.) I could see serving them as a Thanksgiving appetizer if I served Thanksgiving appetizers (I don’t) or as part of a game-day spread in front of the television, in advance of some bespoke chicken wings and the Steelers game.

I like Hetty McKinnon’s new recipe as well, for stir-fried peanut rice cakes with hoisin, inspired by the Cantonese dim sum dish cheong fun, steamed noodle rolls, with hoisin and sesame sauces. Hetty’s dish puts those flavors onto chewy rice cakes, which is reason No. 273 to rely on rice cakes as a freezer staple when you want a quick stir-fry. (More Hetty, more mushrooms: this terrific mushroom Stroganoff!)

And I absolutely want to give Vallery Lomas’s new one-bowl cranberry cornbread a try — the fresh cranberries scattered across the top sink into the batter and add tangy pops to each bite. It’d be a nice Thanksgiving breakfast or snack, perhaps even a Thanksgiving side dish.

Speaking of the holiday, my mailbox is starting to fill with requests for turkey inspiration, menu planning tips and vegan and vegetarian Thanksgiving options. They are legion! You might try on this vegetarian mushroom Wellington for size; you should absolutely consider a meal that includes vegan stuffing and vegan mashed potatoes with vegan mushroom make-ahead gravy and some vegan quick biscuits to mop it up. And here’s a vegan pumpkin cheesecake for dessert.

There are thousands more recipes for right now and for Thanksgiving waiting for you on New York Times Cooking, at least once you’ve gotten yourself a subscription that allows you to access them all. Subscriptions support our work. I hope, if you haven’t already, that you will subscribe today. Thanks.

Now, it’s nothing to do with nutritional yeast or the excellence of tempeh, but you’ve got to read Rembert Browne on H. Rap Brown, in Time.

For Hakai, Larry Pynn wrote about the necropsy of a humpback whale that washed up on the beach on an island in British Columbia. It’s a fascinating tale.

Finally, a love letter to New York City. Here’s Bill Callahan and Bonnie “Prince” Billy covering John Prine’s “She Is My Everything” with Sir Richard Bishop. Enjoy that, and I’ll be back on Wednesday.