Former British Army officer Dr Mike Martin shared reports of Russian militants ditching their uniforms and putting on civilian clothing in order to blend in and escape the battlefield. Dr Martin explained Ukrainians managed to push back against the Russian onslaught in Kupiansk and Izum, winning back their land and sending a clear warning to Russia. The former army officer claimed that Russian troops were ill-equipped and their supplies were running out.

Dr Martin told Times Radio: “This war has never really been right for Russia, they never had enough troops.

“The troops that they have had have been poorly trained, poor morale because of the corruption in the forces they’ve been sort of poorly equipped.

“Rather than buying, you know the military grad stuff they bought the cheap stuff and so on and so forth.

“And the Ukrainians have had the opposite, you know they’ve got great Western equipment more and more coming along all the time, they’re fighting to defend their homeland, their morale is sky high.

“The Ukrainians have been pushing in the South in this place called Kherson which is on the way to Crimea for Ukrainians because Crimea is very important for the Russians that’s really their centre of gravity.

“The Russians rushed lots of troops into Kherson to defend it and because they don’t have enough troops overall they thinned out in the Northeast in this place called Kharkiv and also in the Donbas where they had that offensive a couple of months ago.

Dr Martin added: “What the Ukrainians realised was there was this huge opportunity, the Russians were spread very, very thinly and so they took advantage of it, and they just drove a kind of mechanised thrust Eastwards from Kharkiv, which is the second biggest city in Ukraine in the Northeast.

“Right through as you said in your intro they took Kupiansk, once they took Kupiansk because that’s a major rail junction, then the Russians had to surrender a place called Izum because they were cut off from supplies, and then it created a kind of domino effect.

“And what you actually find in war, war is really about psychology and once you’ve shattered your enemy’s supply and leadership, and its ability to coordinate the whole thing starts to collapse.

“And dominoes start to falling, everyone panics, troops start running away and that’s really what we’re seeing amongst the Russian army, large pockets of it you know, putting on civilian clothes and running away or getting annihilated or just pulling out like it’s, it’s a total rout is the only way we can describe it.” 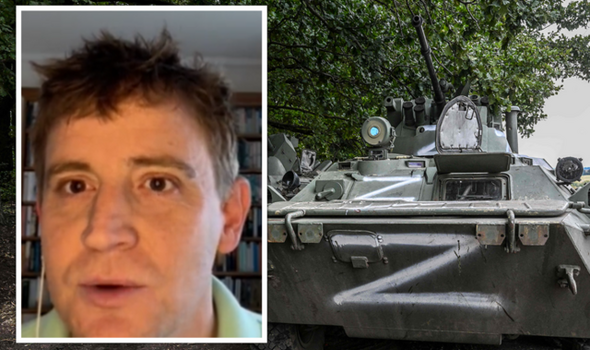