WASHINGTON — Virginia Democrats go to the polls on Tuesday to determine their candidates in races ranging from governor to the State House, but the onset of summer isn’t the only reason this year’s primary season has been sleepy.

Taking place just months after a presidential election, nominating contests in Virginia often reflect the mood of the electorate. And if this year’s primary never seemed to get off the ground, it was in part because many voters are burned out on politics after four convulsive years of the Trump administration, a bitter 2020 campaign and a coronavirus pandemic that is only now receding.

The most dedicated political aficionados have still followed the 2021 races in Virginia. However, former President Donald J. Trump’s ongoing refusal to acknowledge defeat, the storming of the Capitol and the subsequent impeachment inquiry diverted attention from state politics in a way that effectively delayed the start of the primary and starved former Gov. Terry McAuliffe’s opponents in the governor’s race of political oxygen.

This was all manna from heaven for the once and potentially future governor, Mr. McAuliffe, who was succeeded by Gov. Ralph Northam in 2018 because Virginia is the last state in America to bar governors from serving for consecutive terms.

But just because Mr. McAuliffe appears poised to claim the nomination on Tuesday for his old job does not mean the results won’t be revealing.

Here’s what to watch for in the Democratic races. (Virginia Republicans nominated their ticket last month, with Glenn Youngkin, a self-funding former private equity executive, emerging as the party’s nominee for governor.)

How many voters will turn out?

In 2009, Virginia Democrats had a hotly contested primary for governor that included two candidates from the vote-rich Washington suburbs, but only 319,000 voters cast ballots. In 2017, more than 543,000 Virginians voted in the Democratic primary for governor.

The ultimate difference in those two election cycles: Twelve years ago, in the aftermath of President Barack Obama’s election, Republicans would claim the governorship, while four years ago, Democrats rode a wave of anti-Trump energy to sweep all three state offices: governor, lieutenant governor and attorney general.

“We need not have Donald Trump in the White House for our people to get out and vote, because Trumpism is alive and well in the Virginia Republican Party,” said Speaker Eileen Filler-Corn of the State House, a Democrat who was elevated to her position when, in 2019, another anti-Trump wave swept her party to the majority.

Republicans, and some Democrats, are not convinced, especially given the G.O.P.’s nomination of Mr. Youngkin, a Northern Virginia businessman with roots in Hampton Roads.

Without the one-man Democratic turnout lever that was Mr. Trump still in the Oval Office, can the party still overwhelm Republicans in the suburbs, where Virginia elections are often decided?

Overall turnout on Tuesday will offer some initial clues. 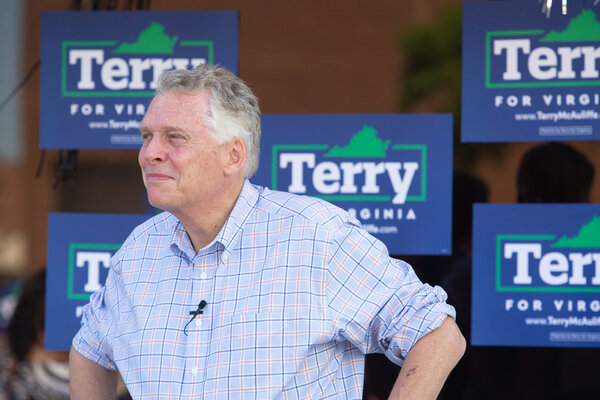 Can Terry McAuliffe win a majority?

Capturing a majority of the vote in a five-way race can be difficult. But Mr. McAuliffe has so dominated the primary that it’s possible he can crack 50 percent. While it’s admittedly an arbitrary figure, a majority would represent a strong vote of confidence in Mr. McAuliffe.

He appears well positioned to reach that threshold. He has claimed endorsements from much of Virginia’s Democratic establishment, including Mr. Northam, who’s now highly popular among Democrats despite his infamous blackface scandal in 2019. And despite running against three Black candidates, Mr. McAuliffe has also received endorsements from many of the state’s prominent African-American leaders.

He has run as the de facto incumbent, linking his governorship and that of Mr. Northam to trumpet the last eight years and the broader Democratic takeover of Virginia. Republicans have not won a statewide race since 2009 and are now in the minority of both chambers of the General Assembly.

“We’re a new state today,” Mr. McAuliffe said last week during a stop at a pie shop in Arlington, recalling what he called the “anti-women, anti-gay, anti-environment, anti-immigrant, pro-gun” Republican legislature when he took office in 2014.

The question is whether his popularity, and the credit he gets from Democrats for Virginia’s transformation, is enough to run away with a race against a field that includes younger, more diverse and more progressive opponents.

Will there be a suburban surge?

The Virginia suburbs outside Washington used to be strikingly different from the rest of the state. “Occupied territory” was the joke residents who lived south of the Rappahannock River would make about the more transient, less culturally Southern communities outside the nation’s capital.

But now far more of Virginia resembles Northern Virginia. In their demographics and, increasingly, their politics, the population hubs of Richmond and Hampton Roads are closer to Arlington than Abingdon.

This is all to say that Mr. McAuliffe’s performance and the overall turnout are worth watching most closely in the so-called urban crescent, stretching from Northern Virginia down Interstate 95 to Richmond and then east on I-64 to Hampton Roads.

Are these Democrats a) enthusiastic to vote and b) eager to support an older, more moderate contender? They were in the 2017 primary, when Mr. Northam fended off a challenge from his left by former Representative Tom Perriello, but Tuesday will tell us more about the state of the party in the precincts that have turned Virginia blue.

What about the down-ballot races?

Races for governor always get the most attention in Virginia’s year-after-the-presidential-election contests because they can be a handy temperature check on the electorate. Backlashes are often first detected here. In fact, until Mr. McAuliffe’s 2013 victory, Virginia had a decades-long streak of electing a governor of the opposite party from the occupant of the White House.

But the other two races for statewide office, lieutenant governor and attorney general, are also worth keeping tabs on.

The primary for the state’s No. 2 job is sprawling, with six candidates running. Three state lawmakers — Sam Rasoul, Hala Ayala and Mark Levine — have the most money. Ms. Ayala enjoys the support of Mr. Northam, and Mr. Rasoul would be the first Muslim elected to statewide office in Virginia.

While the job brings few official duties beyond breaking ties in the State Senate, it’s coveted by up-and-coming politicians because, given Virginia’s one-and-done rule for governors, it can be a quick steppingstone to the top job. Former Govs. Charles S. Robb, L. Douglas Wilder and Tim Kaine, as well as Mr. Northam, followed that route.

Attorney general can also be a launching pad for governor — the joke being that A.G. stands for Almost Governor — and that’s what many believed Attorney General Mark Herring, a Democrat, would be running for this year. But with Mr. McAuliffe seeking the governorship, Mr. Herring, who had his own blackface scandal in 2019, decided to seek what would be a third term.

He drew a challenge from a young, Black state lawmaker, Jay Jones, who picked up the support of Mr. Northam. Mr. Herring, though, has outraised Mr. Jones and has benefited from stronger name recognition. In a primary season that was slow to start and never seemed to fully flower, that could prove enough.