WASHINGTON — Among the harrowing images presented during the impeachment trial of former President Donald J. Trump, one video stood out: a police officer sprinting toward a United States senator to warn of the angry mob nearby.

The senator, Mitt Romney, is shown turning on his heels and fleeing for safety.

“I don’t think my family or my wife understood that I was as close as I might have been to real danger,” Mr. Romney told reporters on Thursday, one day after the video showed Eugene Goodman, a Capitol Police officer already known for his bravery, aiding him. “They were surprised and very, very appreciative of Officer Goodman, in his being there and directing me back to safety.”

For Officer Goodman, it was the second time a video went viral displaying actions widely credited with saving members of Congress. The first, which showed him single-handedly luring a mob away from the entrance of the Senate toward an area with reinforcements, turned him into a hero. The second has added to his lore.

Both have catapulted Officer Goodman — a former Army infantryman who served in one of the most dangerous parts of Iraq during one of the most lethal times of the war — to fame he never sought.

On Thursday, Speaker Nancy Pelosi singled out Officer Goodman for his courage when she introduced legislation to award the Capitol Police and other law enforcement personnel who responded on Jan. 6 with the Congressional Gold Medal, the highest honor of Congress. On Jan. 20, Officer Goodman was given the task of escorting Vice President Kamala Harris at the inauguration of President Joseph R. Biden Jr.

Veterans who served alongside Officer Goodman in the 101st Airborne Division some 15 years ago in Iraq say that the officer, known then as “Goody,” never craved accolades.

“I saw him come out in front of the vice president and he immediately ducked to the right,” said Mark Belda, who served with Officer Goodman in Iraq. “I thought that’s definitely Goody.”

When he closely watched the first video, Mr. Belda said, he saw attributes he recognized in Officer Goodman from Iraq. “He wasn’t prone to anger. As an infantryman, your job is to be violent but it was never his first reaction to use the stick before you use the carrot.”

In Iraq, Officer Goodman was a sergeant and a leader of 10-man rifle squad who assumed new responsibilities soon after his unit arrived in 2005.

His “Hardrock Company” operated in the Sunni triangle area near Baghdad in central Iraq, where American troops engaged in some of the fiercest combat of the war. 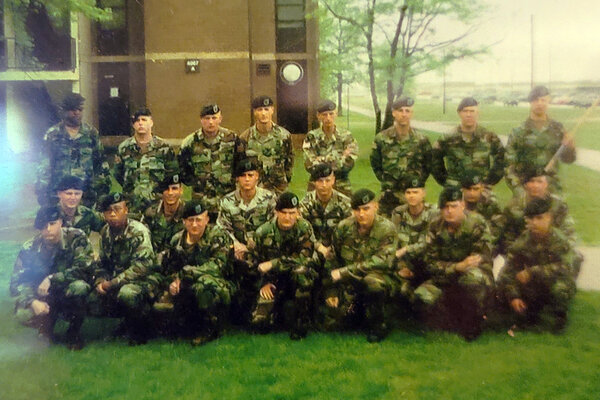 The platoons were required to conduct multiple combat patrols each day to identify explosives before they were detonated, work that often resulted in various injuries, according to Lt. Col. Jeff Farmer, who served alongside Officer Goodman in the company.

“The front squad leader was critical, someone willing to take on this risk and lead his squad day in and day out,” Colonel Farmer said.

That leader was Officer Goodman.

“I cannot recall exactly how many dismounted patrols Goody led as a point man in the company, but I can say that it was likely in the hundreds, making him the go-to guy quite frankly when others needed that reassurance that things were going to be OK,” Colonel Farmer said.

Officer Goodman was a quiet professional, his superiors said, serious and focused on his missions but also quick with a joke to ease tension in the ranks, they said. His fellow soldiers could count on him to do “what needed to be done,” said John Greis, who served as his platoon sergeant in Iraq. “That’s coolness under pressure.”

Colonel Farmer said he was not surprised when he saw the video of Officer Goodman facing the angry mob in the Capitol.

“Calm, cool, and collected under fire, that’s just Goody,” Colonel Farmer said. “I trusted my life with him, and still would to this day.”