WASHINGTON — No longer restrained by President Trump’s affection for Turkey’s authoritarian leader, U.S. officials and Congress are using the waning days of his presidency to ready sanctions and strike a strident tone against the strategic but unreliable ally.

Turkey, a member of the North Atlantic Treaty Organization, has vexed the administration almost since its start. That has been as much Mr. Trump’s doing — and his admiration for its president, Recep Tayyip Erdogan — as that of actions by the government in Ankara, which has abused human rights, imprisoned Americans and journalists, and muscled into confrontations from Syria to Libya to the Caucasus to the eastern Mediterranean Sea.

The redirection of U.S. policy also will require President-elect Joseph R. Biden Jr. to carefully bring Turkey back into the West’s embrace and keep from pushing it closer to Russia.

“For years, President Trump has personally shielded Erdogan and Turkey,” said Senator Chris Van Hollen, Democrat of Maryland. He said the incoming Biden administration “will be an important check on Erdogan’s efforts to expand his influence at our expense, in a way that undermines our interests.”

“It’s a little bit of a crossroads for Erdogan,” Mr. Van Hollen said in a recent interview. “He’s going to have to make a decision — is he going to be the faithful NATO ally, or is he going to go it alone in the region?”

For the first time, and after Ankara tested the system this fall, White House officials have informed Turkish diplomats that the Trump administration will not oppose the congressional sanctions, according to two people involved in the discussions.

Instead, they said, the sanctions are meant in part to warn Egypt, India, Saudi Arabia and other nations that have signaled interest in purchasing Russian military equipment.

At a meeting of foreign ministers from NATO nations last week, Secretary of State Mike Pompeo criticized Turkey on several fronts, according to a person briefed on his comments. His statements — against Turkey’s defense purchases, its exploration of natural gas in disputed waters in the eastern Mediterranean Sea and its support of foreign forces in external conflicts such as Libya — showed that Mr. Pompeo had wearied of trying to temper rising tensions among European allies and American lawmakers.

“We are concerned about some of the Turkish behavior,” Kay Bailey Hutchison, the U.S. ambassador to NATO, told reporters ahead of the foreign ministers’ meeting in Brussels. “The idea that you could put a Russian-made missile defense system in the middle of our alliance is out of bounds.” 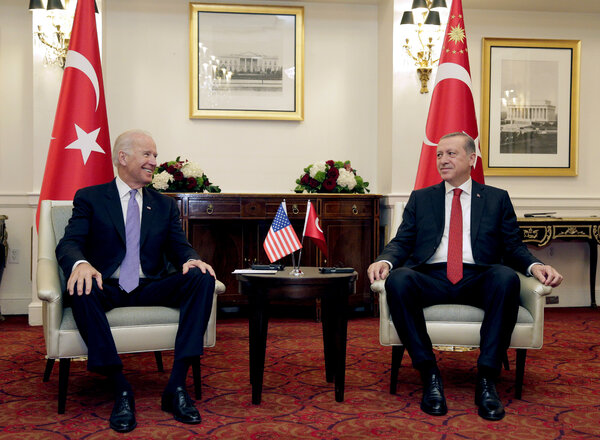 The European Union is weighing its own sanctions against Turkey as retaliation for separate disputes with Greece, Cyprus and Germany in a decision that could come as soon as Thursday, according to a European diplomat in Washington.

Taken together, Turkey is feeling increasingly isolated, according to a senior official in its government.

Last month’s basing of a U.S. Navy expeditionary ship at Souda Bay, off the Greek coast, signaled that Turkey was no longer the key U.S. ally in the Eastern Mediterranean, the senior official said.

The Abraham accords brokered this fall by the Trump administration — fostering normalized relationships among Israel and three Arab states, Bahrain, Sudan and the United Arab Emirates — harnessed Middle Eastern countries that are hostile to the Muslim Brotherhood. The Islamist movement is supported by Mr. Erdogan.

The senior Turkish official also described feeling snubbed by Mr. Pompeo’s visits this fall to rivals in Cyprus and Greece, and then his tour of Istanbul with his wife in November instead of going to Ankara to meet with government leaders.

The expected sanctions are sure to hammer Turkey’s already strained economy and may force Mr. Erdogan to pull back from most of his military missions abroad. (One exception would be in neighboring Syria, where Turkey is battling Islamic State militants and American-backed Kurdish fighters; Mr. Erdogan considers both of the groups to be terrorists and is unlikely to retreat.)

Experts warn that this could push Turkey into Russia’s arms if Mr. Biden is not careful.

“Relations with Turkey will be a major, urgent question for the Biden administration,” said James F. Jeffrey, a former U.S. ambassador to Turkey and Iraq who retired last month as the State Department’s special envoy for Syria policy and the coalition to defeat the Islamic State.

“Given the country’s size, location, economic and military power, and the pro-Western sentiments of the population — if not its president — does it make sense to sideline Turkey or push it into the Russian camp?” Mr. Jeffrey said.

He noted that Turkey and Russia have been on opposite sides in ongoing conflicts in Syria, Libya and Nagorno-Karabakh. It also remains a critical NATO ally in Iraq and Afghanistan, and opposes Iran’s regional advances.

The senior Turkish official described Mr. Erdogan’s interests as ultimately having more in common with the West than with Russia. But, he said, how the Biden administration approaches the dispute over the missile defense systems will be a first test.

It is far from certain a compromise can be struck. But the Turkish official said Mr. Biden’s advisers have indicated in low-level discussions they were open to considering compromises as they are proposed, including convening a NATO working group to look at whether Russia could indeed penetrate Western military systems through the missile defense systems.

A spokesman for Mr. Biden’s transition team declined to comment.

The senior Turkish official also said that Mr. Biden’s advisers have made clear they will engage with Turkey through traditional and technical diplomatic channels — and not rely on the kind of spontaneous and direct lines of communication that marked the relationship between Mr. Trump and Mr. Erdogan.

That was welcome news to the Turks, the senior official said.