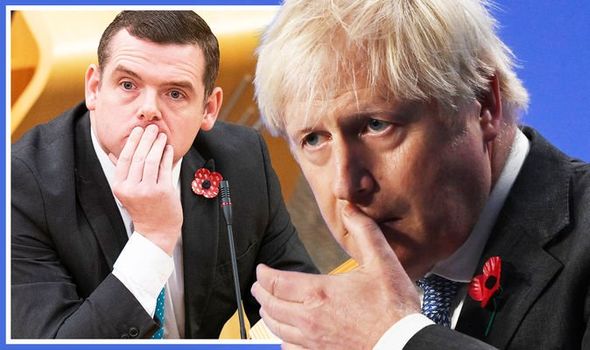 Labour now has a six point lead ahead of the Conservatives, according to Savanta ComRes, in the latest sign that allegations of sleaze have damaged Tory fortunes. A Conservative insider said many of the MPs who won Labour-held “red wall” seats are “frankly aghast at the amounts of money their colleagues are making”. In the latest blow to the party, Scottish Tory leader Douglas Ross has reported himself to Westminster’s ethics watchdog for failing to declare earnings while serving as an MP.

Mr Ross apologised for failing to fully record his salary as a member of Scottish Parliament and earnings as a football assistant referee. He has accepted just one salary since being returned to Holyrood with cash going to several charities.

The polling found two-thirds of people think Boris Johnson should apologise for his “handling of the Owen Paterson scandal”. The Government-backed attempt to delay Mr Paterson’s suspension from the Commons for breaking lobbying rules and replace the system for scrutinising MPs’ behaviour has put the spotlight on the jobs MPs have taken to top-up their salary of £81,932.

A first-term Conservative MP who turned their seat from red to blue in 2019 said: “It’s a source of frustration that we have newer MPs who I believe take their role very seriously and are very connected with their electorate and are very devoted to their role and it does seem as though there is another class of MP who are arrogant and complacent.”

Another MP who in 2019 won a Labour-held seat for the Conservatives said there is a “very clear generational gap” among MPs and while those who won “red wall seats” are working at the “coalface every single week” it was the “old guard” who are at the heart of the furore.

They expected that most of the 2019-intake would be happy for new rules to come in to put a stop to MPs double-jobbing as private sector consultants.

“Yes, is the short answer,” they said. “If you are doing the job properly, being an MP [takes up] the vast majority of your time.”

Conservative MP Lee Anderson, who took the red wall seat of Ashfield from Labour in 2019, suggested that when people stand for election the ballot paper should list “all the occupations they’ve got and outside interests” because “the public have got a right to know”.

He also suggested that the number of years a person can serve as an MP could be capped to ensure “fresh blood” enters the Commons.

Questions about alleged sleaze will be back in this spotlight this week. On Wednesday, Prime Minister Boris Johnson will be quizzed on “propriety and ethics in Government” when he appears before the cross-party liaison committee, whose members include Chris Bryant, the chairman of the standards committee.

The Savanta ComRes polling found nearly two-thirds of people (62 percent) thought former attorney general Geoffrey Cox should resign in the wake of reports he earned almost £900,000 in the past year as a barrister.

A Conservative insider said that many of the MPs who won seats in the north and the Midlands have a “political outlook which is just very different from the traditional southern shire seat”.

They said: “There is a very real sense among those MPs [they] are there to represent and deliver for their constituents. It is not a kind of highfalutin philosophical or ideological cause that they are subscribing to.

“It is actually quite a practical delivery task that they are there to do, which is to bring jobs and growth and civic pride back to places that haven’t had it, and that is very, very different I think to some of the Conservative MPs who have been there for 10, 20 years who are perhaps there as either as libertarian freedom fighters or as people who see politics as their calling; it’s not so much about delivery for those people, it’s much more about an intellectual pursuit, and I think that divide is real and you’re seeing that play out a little in this discussion with some of those red wall MPs frankly aghast at the amounts of money their colleagues are making.”