President Trump’s blinkered view of 2020 polling has created something of an alternate universe, even as his campaign struggles to find the voters he needs in the data it has. 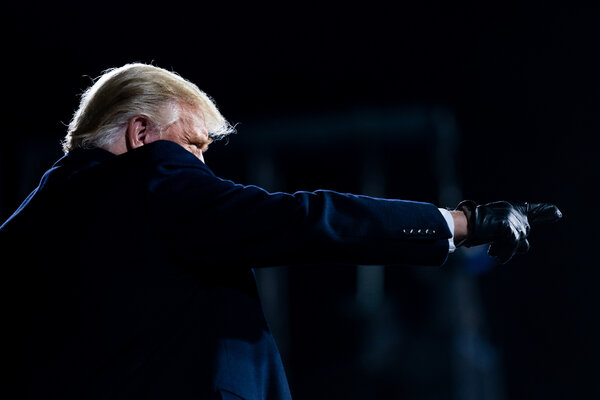 When President Trump talks about polling, his focus is very much on survey-takers that he thinks are good for him. Polls that show him trailing Joseph R. Biden Jr. — virtually all national polls — are simply “fake news.”

The president’s blinkered view has created something of an alternate universe, one not governed by polling averages or independent analysis but by declarative statements that, at times, feel as if they are coming out of nowhere.

This month, Mr. Trump proclaimed on Twitter that he was “winning BIG in all of the polls that matter.”

Such polls seem to boil down to Rasmussen Reports, which consistently — and in isolation — has a rosier picture for the president nationally than other surveys do, and the Trafalgar Group, which has had better numbers for Mr. Trump in Midwestern states.

His choose-your-own-adventure approach to polling that has shown little understanding of data science, and his pronouncements have come as his advisers are trying to take in serious polling and data analysis to make sense of what the electorate voting in 2020 will look like.

It has been a hallmark of Mr. Trump’s public commentary since the first time he ran for president that he treats polling as rigged against him if it isn’t favorable for him. Despite his campaign spending $10 million over the past two years on some of the most sophisticated data available, the president prefers to use what he sees on the news. And he treats voter support as a mystical, rather than a mathematical, proposition.

Some of Mr. Trump’s advisers believe there is a wellspring of “shy” or “hidden” Trump voters — predominantly whites without college educations in rural areas — who are either not candid with pollsters about their choice for president, or aren’t responsive to pollsters at all.