WASHINGTON — In the days leading up to the Jan. 6 riot, Thomas Edward Caldwell, an apparent leader of the far-right Oath Keepers, had a message for the militia members he had organized to mobilize against Congress: “This kettle is set to boil.”

Court documents unsealed on Tuesday said Mr. Caldwell, a 66-year-old from rural Virginia, advised the others on Dec. 31, “It begins for real Jan 5 and 6 on Washington D.C. when we mobilize in the streets. Let them try to certify some crud on capitol hill with a million or more patriots in the streets.”

Mr. Caldwell and two associates from Ohio — Donovan Crowl, 50, and Jessica Watkins, 38 — were charged with conspiracy to commit federal crimes. All three had admitted to invading the Capitol to reporters and were also identifiable in videos posted on social media.

The case revealed the first evidence of planning among a known militia group ahead of the day of chaotic mob violence. Investigators have said they are increasingly focused on right-wing extremist groups to determine whether any plotted aspects of the attack on the Capitol in advance, even as most of the rioters spontaneously stormed it.

Mr. Caldwell had advised militia members to stay in a particular Comfort Inn in Washington’s suburbs, according to messages cited in court documents, advising that it offered a good base to “hunt at night” — apparently meaning looking for antifa-style left-wing protesters to fight. Ms. Watkins apparently rented a room there under an assumed name, an F.B.I. agent said.

Mr. Caldwell appeared virtually in federal court in Virginia on Tuesday, pledging to fight the charges against him. In arguing for release on bond, Mr. Caldwell pointed to his age as well as underlying medical issues and the threat of the coronavirus, noting that he relied on a machine at night to help with sleep apnea. A judge declined the request.

Federal investigators also recovered audio recordings of Ms. Watkins’ voice during the riot from the Zello cellphone app, which acts like a walkie-talkie, speaking to other people thought to be Oath Keepers. “We have a good group,” she said early in the riot, according to the charging document. “We have about 30-40 of us. We are sticking together and sticking to the plan.” An unknown male responded, “We’ll see you soon, Jess. Airborne.”

An unidentified man said later, “You are executing citizen’s arrest. Arrest this assembly; we have probable cause for acts of treason, election fraud.” Ms. Watkins responded that she and others were under the main dome of the Capitol, and another unknown male voice encouraged her to continue, saying this was what they “trained for.”

The group they are accused of being part of, the Oath Keepers, is a far-right militia-style organization founded by military and law enforcement veterans that professes to believe that a shadowy globalist cabal is plotting to take away Americans’ rights.

Charging documents against the trio noted that amid the generally chaotic scene as the mob started to push its way into the Capitol, a group dressed in paramilitary gear and Oath Keepers paraphernalia stood out for its coordination. In one video, about 10 Oath Keepers in helmets “move in an organized and practiced fashion and force their way to the front of the crowd gathered around a door to the U.S. Capitol.”

Scenes of people with military training marching shoulder to shoulder have horrified Pentagon leaders, who fear that weapons and tactics training once provided by the armed forces were co-opted. At least 12 National Guard members have been removed from duties related to the inauguration, two of them for possible links to right-wing extremist movements, Defense Department officials said on Tuesday.

Others arrested in the riots have been linked to the Oath Keepers, though they have not been accused of being part of an organized conspiracy.

At a hearing in Texas last week for Larry Brock, who was photographed on the Senate floor carrying flexible handcuffs, a prosecutor cited a Facebook post linking him to the Oath Keepers. Mr. Brock, a retired Air Force officer, told The New Yorker that he had found the flex cuffs on the ground and did not intend to use them.

And a criminal complaint filed Saturday against Jon Ryan Schaffer, a guitarist for the heavy metal band Iced Earth, accused of being among rioters who sprayed Capitol Police with “bear spray,” said he has long held “far-right extremist views” and suggested that he is a member of the Oath Keepers. 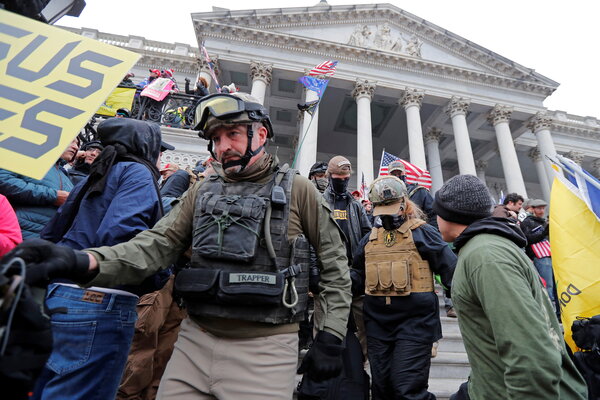 The Oath Keepers — named for members’ professed intent to uphold their oaths to protect the Constitution — have no geographical center, with chapters scattered in Oregon, Montana, Florida, Texas, Arizona, Ohio, New York and elsewhere. Some of its ideology overlaps with the so-called Three Percenters, another paramilitary-style right-wing movement that seeks to attract veterans.

The Oath Keepers have a more formal structure, including bylaws and dues. Although the organization has claimed to have around 35,000 members, the Anti-Defamation League, which tracks extremist groups, estimated several years ago that its membership is more like several thousand.

The organization was founded in 2009 by Stewart Rhodes, 55, a disbarred Montana lawyer who attended Yale Law School and once worked as an aide to the former Representative Ron Paul, the Texas libertarian. Its members tend to anticipate a coming new civil war.

“It was motivated by the perception that the federal government was tyrannical and that everyday Americans needed to be ready to resist that tyrannical government when it came to the door,” said Sam Jackson, who published a book on the organization last year and is a professor at the University of Albany specializing in homeland security issues.

And during the unrest that year after the police killing of a Black man in Ferguson, Mo., heavily armed Oath Keepers patrolled the streets and claimed to protect businesses, but discontinued after criticism from local law enforcement.

The group has also been among those who sent armed vigilantes to patrol the border with Mexico or promoted such efforts by others.

In the weeks leading up to the Capitol assault, Oath Keepers issued heated calls to action. Shortly after the election, a lengthy message attributed to Mr. Rhodes circulated on far-right websites urging volunteers to converge on Washington for a “Stop the Steal” rally. Oath Keepers, it said, would provide security, including “some of our most skilled special warfare veterans standing by armed, just outside D.C.”