PARAJE, N.M. — Six members of the Laguna Pueblo community gathered last week in the cool, fragrant kitchen of an adobe house, discussing their hopes for “Sister Deb” — Deb Haaland, a Laguna citizen, former congresswoman from New Mexico and now secretary of the interior.

“I’m so excited about her,” said Rachael Lorenzo, who identifies as nonbinary. “But it’s a little heartbreaking to hang all our hopes on one person.”

It is difficult to overstate the significance to Native people of Ms. Haaland’s role as the first Native American to lead a cabinet agency, specifically an agency once responsible for eradicating the homes, culture and often the lives of Indigenous people.

“The policy of removal, except under peculiar circumstances, must necessarily be abandoned, and the only alternatives left are to civilize or exterminate them,” Interior Secretary Alexander H.H. Stuart declared in 1851, frustrated by tribal resistance to forced resettlement.

It is also difficult to overstate the pressures and expectations Ms. Haaland faces from her people, who hope she will address 150 years of betrayal by a department officially entrusted with ensuring Native Americans’ welfare.

“Our ancestors have long foretold of a day of reckoning, when our values and the values of those who came to this country would collide. We’re at that day of reckoning,” said Fawn R. Sharp, the president of the National Congress of American Indians. “Deb will not only do the work to respond to and serve this generation, but her leadership is going to have a ripple effect for generations to come.”

Ms. Haaland embraces the historic nature of her role: “I’m a living testament to the failure of that horrific ideology,” she said in December in accepting President Biden’s nomination. She declined to be interviewed for this article.

Today, 5.2 million people identify as American Indian or Alaska Native, alone or in combination with another race, but they remain one of the most overlooked minority populations in the country. Only one-third of Americans believe Native people face discrimination, according to IllumiNative, a research and advocacy group.

Crystal Echo Hawk, IllumiNative’s founder, said most Americans’ knowledge of Native history stops in 1890, when the Army massacred hundreds of members of the Lakota Sioux tribe at Wounded Knee Creek in South Dakota, one of the worst chapters in the conquest of America’s Native people. By then, the Native population in the United States had already declined by nearly 90 percent from the landing of Columbus, to fewer than a quarter million. Today, nearly 90 percent of states’ history standards do not mention Native Americans after 1900, Ms. Echo Hawk said.

“There’s a lot of expectations and hope projected on Deb, because there’s so much wrong with how this country has treated and continues to treat Native people,” Ms. Echo Hawk said. “She’s heading an agency charged with managing the federal trust, where Native people are stuck in the same place with parks and trees and animals.” 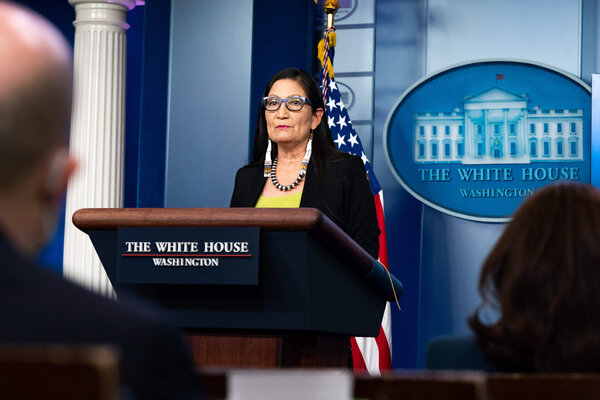 Ms. Haaland’s portfolio is immense, addressing climate change, regulating mining and oil drilling on federal land and national waters, irrigating much of the West, monitoring earthquakes, preserving national parks and protecting wildlife. But her early moves make clear she prioritizes the Interior Department’s responsibility for Native peoples, who fall under the jurisdiction of the department’s Bureaus of Indian Affairs and Indian Education.

For many of the tribes, the key to the Interior Department’s power is its control of 500 million acres of public land, or one-fifth of the United States. Much of that was once tribal lands, and they are still subject to constant disputes over treaty rights, land acquisition and natural resources exploitation.

In one of her first moves, Ms. Haaland streamlined the process for Native American tribes to reacquire public lands from the federal government. The process, called Fee to Trust, enables tribal governments to consolidate and re-establish jurisdiction over land in or near reservations.

Trust acquisitions enhance the power of the nation’s 574 recognized tribes, which are sovereign governments, to provide housing and law enforcement, protect hunting and farmland, and manage and benefit from natural resources. Ms. Haaland’s order reversed a Trump administration policy that stalled tribal acquisitions of these lands by centralizing the approval process in Washington.

Last month, Ms. Haaland approved a new Constitution for the Cherokee Nation that explicitly grants full rights of citizenship to the Cherokee Freedmen, people formerly enslaved by Cherokee tribal citizens. Disputes and litigation over Freedmen citizenship have divided the Cherokee, Choctaw, Chickasaw, Muscogee (Creek) and Seminole Nations since 1866. In approving the Cherokee Constitution, whose text requires the assent of the Interior Department, Ms. Haaland encouraged other tribes to follow suit.

Ms. Haaland has also pledged to bring more federal resources to bear on missing and murdered Indigenous people, especially women, work she began as a member of Congress. She has helped create a missing and murdered unit and worked on enacting the Not Invisible Act, which established a commission led by the Interior and Justice Departments on reducing violent crime against Indigenous people.

Ms. Haaland, 60, was born in Winslow, Ariz., to Mary Toya, a Laguna woman, and John David Haaland, a Minnesotan of Norwegian descent. Both parents served in the Navy, and Mr. Haaland, a Marine, earned a Silver Star for heroism in Vietnam. Ms. Haaland lived a peripatetic early life, changing schools frequently before the family settled in Albuquerque. Her ancestral home is in the Laguna Pueblo village of Mesita, population 800, and for 25 years, her mother worked for the Bureau of Indian Affairs.

Ms. Haaland raised her child Somáh alone, often struggling to make ends meet. Ms. Haaland enrolled in the University of New Mexico at the age of 28, eventually earning a law degree. Ms. Haaland has said that she and her child both still have student loans.

Ms. Haaland plunged into politics while running a small salsa-making business. She was also chairwoman of the Laguna Development Corporation, a business owned by the Pueblo of Laguna whose many ventures benefit the tribal economy, and include “World Famous Laguna Burger” restaurants and the sprawling Route 66 casino and hotel complex in Albuquerque.

In 2018, four years after a failed bid for lieutenant governor of New Mexico, Ms. Haaland ran for a House seat and won. Expectations had abounded then, too. A campaign intern, DeChellie Gray, a Navajo, recalled when Ms. Haaland returned from a long walk in Albuquerque and said that a homeless man had approached her at a bus stop. “I’ve heard your story about being sober,” he told Ms. Haaland, who has been sober for three decades. “I want you to be in Congress because you understand my life struggles.”

Ms. Haaland and Representative Sharice Davids, Democrat of Kansas, took office in 2019 as the first two Native women in Congress. Ms. Haaland wore a traditional ribbon skirt, turquoise jewelry and moccasin boots for her swearing-in, but for all her significance, she was a low-key House member, not part of Representative Alexandria Ocasio-Cortez’s “squad” and no one’s idea of a firebrand.

And yet she soon became a favorite of the left, championed by Hollywood actors like Mark Ruffalo, who called her nomination “a significant step towards healing some of the deepest wounds of the past.” Ms. Haaland was not angling for the Interior Department job when Julian Brave NoiseCat, a young writer and political strategist, began “a little guerrilla campaign” for her nomination that grew into a groundswell, with progressive activists and celebrities joining American Indians in support.

“She in many ways embodies the idea that has come out of grass-roots activism that Native people have real things to add to the environmental conversation,” Mr. NoiseCat said. “For young people and progressives, it can feel hard to get any authentic real wins. But that whole experience showed me it is possible to show the right thing can happen.”

Ms. Haaland’s congressional swearing-in party became a major Native gathering, Mr. NoiseCat said. Ms. Touchin, whom Ms. Haaland urged into Democratic activism, flew in from New Mexico with a delegation of Laguna women, one bearing a carry-on stuffed with frozen tamales and 500 Pueblo cookies. After the Senate confirmed Ms. Haaland as interior secretary, tribal citizens joined a virtual celebration on Zoom. Ms. Haaland spoke with them from her kitchen, Ms. Davids by her side. “I’ll never forget the first time I addressed her as ‘Madame Secretary,’” Ms. Sharp said.

Tribal leaders say Ms. Haaland’s fluency in Native issues alone signals progress. “Every time we had a change of administration we’d have to go through this whole process of educating them, and by the time you finish, months, sometimes years, of an administration had passed us by,” said Rachel A. Joseph, a former chairwoman of the Lone Pine Paiute Shoshone tribe in California and an activist since the 1970s.

In Paraje, Ms. Haaland’s friends said that as tribal leaders across the nation endorsed her for the Interior Department, Laguna leaders were among the last. “That’s the toxic masculinity and patriarchy that goes on around here,” said Ashley Sarracino, standing in the doorway of her trim adobe house on Acorn Street, a tumbleweed on its front porch.

Ms. Sarracino said young women in Indian Country have joined local political organizations at an unheard-of clip, “because Native women like me are able to see Deb.”