Two top executives of Emergent BioSolutions, a previously obscure Maryland biotech firm whose Baltimore plant ruined millions of doses of coronavirus vaccine, have agreed to testify on Capitol Hill next week as part of a congressional investigation into their company, a politically connected federal contractor.

Fuad El-Hibri, the company’s founder and executive chairman, and Robert Kramer, its chief executive officer, will appear on May 19 before the House Select Subcommittee on the Coronavirus, committee officials said on Wednesday morning. The panel has opened a sprawling inquiry into Emergent’s manufacturing failures, and whether the company used its contacts with the Trump administration to land hundreds of millions of dollars in coronavirus vaccine contracts.

“Emergent’s actions wasted American taxpayer dollars and reduced the number of doses available for global vaccination efforts,” Representative Jim Clyburn, Democrat of South Carolina and the subcommittee’s chairman, said in a statement to The Times. He said that Congress “is looking for answers and they are long overdue.”

An investigation by The New York Times, published in March before the firm’s vaccine manufacturing troubles were known, examined Emergent’s aggressive lobbying tactics and lucrative relationship with the federal government.

The hearing will put an unwelcome spotlight on the company, which kept a low profile over the past two decades as it cornered the market on sales of anthrax vaccines and other bioterror-related products to the Strategic National Stockpile, the nation’s emergency medical reserve.

Emergent’s stock performed so well in 2020 that Mr. El-Hibri cashed in shares and options worth over $42 million, corporate filings show. Mr. Kramer, who has boasted to investors that “extensive relationships across multiple agencies within the federal government” helped build the company, took home a $1.2 million cash bonus and $2 million in stock awards. 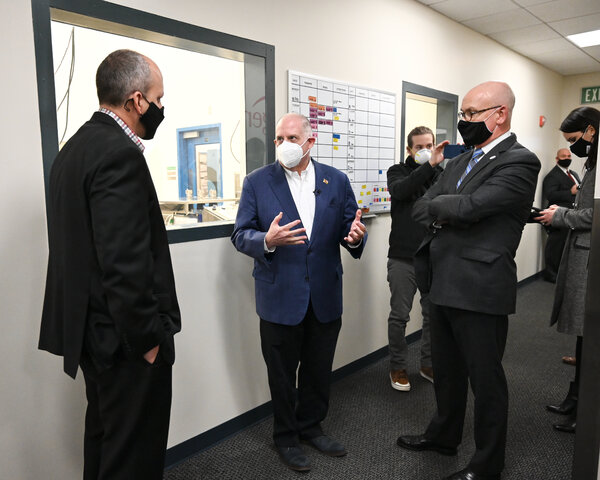 On a recent call with investors, Mr. Kramer announced a management shake-up and vigorously defended the company and its Baltimore plant, whose workers accidentally conflated the ingredients of two coronavirus vaccines, one by Johnson & Johnson and the other by AstraZeneca. The error resulted in the loss of up to 15 million Johnson & Johnson doses.

Mr. Kramer took “full responsibility” for the manufacturing problems, acknowledging that the “loss of a batch for a viral contamination is extremely serious, and we treated it as such.” But he also said that Emergent had taken on a “Herculean task” in a crisis.

In letters to the two Emergent executives last month, Mr. Clyburn and Representative Carolyn Maloney, Democrat of New York and chairwoman of the House Oversight and Reform Committee, demanded a slew of documents, including any correspondence between the company and Dr. Robert Kadlec, President Trump’s assistant secretary for preparedness and response, who previously consulted for the company. In interviews, Dr. Kadlec has said his consulting work, in 2013 and 2014, was limited and did not affect contracting decisions.

“Emergent has been in the news a lot lately, and that’s frankly not something we’re used to,” Mr. Kramer wrote in a commentary posted on the company’s website last month. “Until a year ago we were a little-known company that does our work behind the scenes.”

The company is trying to burnish its image with television and digital advertising, as part of a campaign it is calling “We Go.” The 30-second ads feature images of white-clad lab technicians and spotlight some of the company’s lesser-known work manufacturing cholera vaccines and medicine used to treat opioid overdoses, as well as its Covid-19 work.

Emergent’s plant in Baltimore is one of two federally designated Centers for Innovation in Advanced Development and Manufacturing, funded in part by taxpayers. In June 2020, the federal government awarded Emergent a $628 million contract, largely to reserve space for coronavirus vaccine manufacturing, despite staffing and quality concerns.

Last month, after The Times disclosed the potential contamination, the Biden administration responded by putting Johnson & Johnson in charge of the Baltimore facility and moving out AstraZeneca. F.D.A. inspectors later reported that more vaccines may have been exposed to contamination. Doses made at the plant have not been cleared for use in the United States, and millions of doses made in Baltimore and sent overseas have also been put on hold.