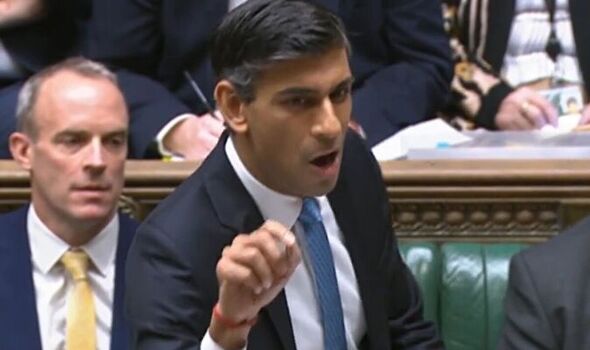 In terse and at times bitter exchanges in the House of Commons this afternoon, SNP MPs lined up to accuse Westminster of holding Scotland hostage.

Taking place just hours after the Supreme Court rules IndyRef2 can only take place with consent from the UK Parliament, Ian Blackford accused No10 of “denying democracy to the people of Scotland”.

But Mr Sunak called on the separatist politicians to work with him in shared issues facing the United Kingdom and to put an end to attempts to break up the union.

He said: “We respect the clear and definitive ruling of the Supreme Court of the United Kingdom.

“What I would say to the honourable gentleman I think that the people of Scotland want us to be working on fixing the major challenges that we collectively face, whether that is the economy, supporting the NHS or indeed supporting Ukraine.

“Now is the time for politicians to work together and that is what this Government will do.”

He added: “When it comes to Scottish democracy, I am pleased that the Scottish Government has one of the most powerful devolved assemblies anywhere in the world.

“I was pleased, very shortly after becoming Prime Minister, to be the first Prime Minister in over a decade to attend the council, to sit down with the First Minister, to explore ways in which we can work together with the Socttish government to deliver for the people of Scotland.

“Whether that’s delivering on growth deals, delivering freeports or ensuring that the £1.5billion of extra Barnett money can go towards supporting public services.

“That’s what we’re committed to doing in Scotland.”

Judges at the UK’s highest court announced their unanimous ruling this morning, making clear the Scottish Parliament “does not have the power to legislate for a referendum on Scottish independence”.

The ruling cannot be appealed, effectively ending Ms Sturgeon’s hopes of holding a legal referendum on Scotland’s future in the UK.

She has vowed to use the next general election as a de facto referendum independence.