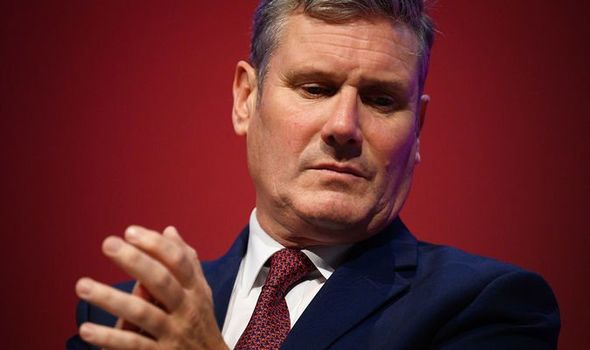 Fierce left-wing opposition killed off his hopes to replace the one-member one-vote system which had propelled Jeremy Corbyn into the top job with a return to an electoral college that would split the vote between trade unions and affiliated organisations, party members and MPs. Leading left-wingers did not hide their scorn for the present leadership.

Ex-leader Mr Corbyn was due to tell a Young Labour rally that “our party’s leadership seems to be turning its back on that hope for a more equal, democratic and sustainable future”.

Former shadow chancellor John McDonnell turned his guns on those at the top of the party when the national executive committee backed doubling the required threshold of support from MPs to stand in a leadership contest from 10 percent to 20 percent.

He said: “These desperate attempts to restrict the influence of party members demonstrate an almost pathological fear of democracy amongst the Labour leadership [and] bureaucracy. Defeated on their main attack on democracy they now pick away wherever they can.”

Labour general secretary David Evans faced heckles of “Oh Jeremy Corbyn!” when he asked members why they joined the party.

He told the crowd at the Labour conference “everybody remembers why they joined Labour,” asking: “What was it for you?”

Calls from the crowd of “Oh Jeremy Corbyn!” came in response.

Left-wingers are heartened that Sir Keir’s attempt to scrap one-member one-vote was derailed; he can expect further opposition when his watered-down package of reforms is voted on today (Sunday, September 26). These would make it harder for Labour members to de-select an MP and no longer allowing people to pay a fee and become a “registered supporter” so they can vote in leadership contests.

Mish Rahman, a member of the NEC and Momentum’s national coordinating group, said: “The central measure of Keir Starmer’s attack on democracy has comprehensively failed. The electoral college is dead.”

Deputy leader Angela Rayner sought to rally the party with a pledge to boost workers’ rights and a promise to “stamp out the Tory sleaze that has polluted our politics and corrupted our democracy”.

Shadow business secretary Ed Miliband will attempt to put the spotlight on policy today (Sunday, September 26) when he unveils plans for a 10-year investment to “green” the steel industry, saying Labour would invest up to £3billion.