Sanders, a onetime front-runner who promised to lead a grassroots political revolution into the White House, acknowledged he no longer had a path to victory after a string of decisive nominating contest losses to Biden but promised to work with his more moderate former rival to oust Trump.

The independent U.S. senator from Vermont said the coronavirus outbreak, which has taken him off the campaign trail and limited his ability to get his message out, required a broad response and urgent attention in Congress.

“I cannot in good conscience continue to mount a campaign that cannot win, and which would interfere with the important work required of all of us in this difficult hour,” he said in a livestreamed speech to supporters from his hometown of Burlington, Vermont.

Sanders, 78, called it a “difficult and painful decision” but said he would stay on the ballot in future primaries and continue to gather delegates in order to push the Democratic platform toward his populist anti-corporate agenda, including a government-run healthcare system and tax hikes for the rich.

The departure of Sanders, Biden’s last remaining rival in a field that once included more than two dozen candidates, sets up a long battle for the White House between the 77-year-old Biden and Trump, 73, who is seeking a second four-year term in office.

That matchup for the foreseeable future will revolve around Trump’s handling of the public health crisis that has upended all aspects of American life and rocked the country’s economy.

Biden on Wednesday signaled he was ready for a bruising general election fight and the challenge he now faces in trying to unite the Democratic Party’s liberal and moderate wings.

“It’s going to be a really rough and I suspect pretty mean campaign,” Biden told donors at an online fundraising event after Sanders’ announcement.

In a separate statement, he praised Sanders and promised his ideas would be incorporated into Biden’s White House run.

“I see you, I hear you, and I understand the urgency of what it is we have to get done in this country,” Biden said to Sanders’ supporters. “I hope you will join us. You are more than welcome. You’re needed.”

Winning over Sanders’ most ardent supporters will not be easy. Sanders’ speechwriter David Sirota said Biden should rethink his opposition to parts of Sanders’ agenda that opinion polls show are popular among Democratic voters.

“Biden’s campaign has to do its part to bring those voters into the fold and energize them in a real way, and they’re going to have to do more than just saying Donald Trump is bad. So far Biden has not done that,” Sirota said. 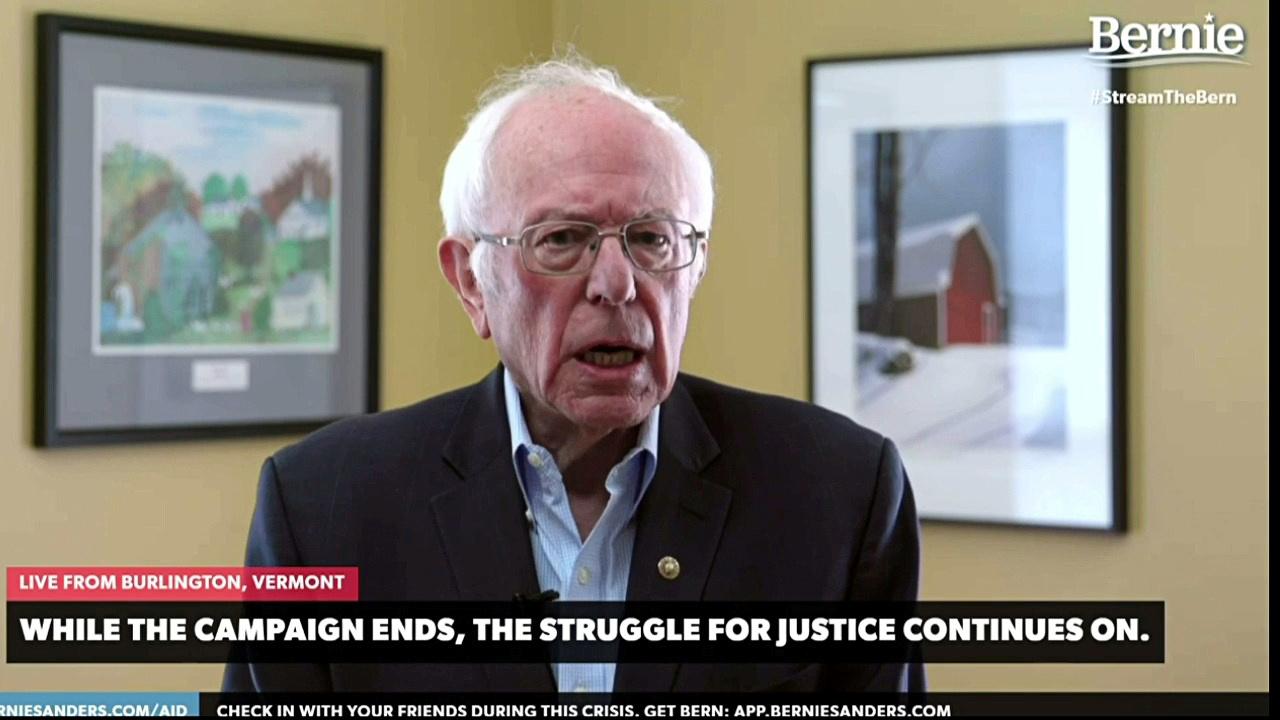 Sanders parlayed massive rallies, an anti-establishment message and fervent support from young and new voters into success in the early nominating contests before losing in South Carolina in late February, leading moderate Democrats to unite behind Biden.

Sanders suffered a string of decisive losses through March as Democrats settled on Biden as the candidate with the best chance of beating Trump, putting the senator under growing pressure from Democrats to end his campaign and help the party unite.

Some allies had encouraged Sanders to stay in the race to further influence Biden’s policy positions. But Sanders made little headway on expanding his coalition beyond young voters, who did not turn out to the polls in large numbers.

Instead, Biden was the one who won support from a growing coalition of women and men, white and black voters, those with or without college degrees, and self-described liberals and moderates.

After a long and bitter campaign against Hillary Clinton in 2016 that made him a well-known political commodity, Sanders entered the race with clear advantages, including an unmatched ability to raise large sums of money from small-dollar donors and a passionate base of supporters – including the so-called Bernie Bros – drawn to his anti-establishment message.

After he was hospitalized with chest pains in October, his campaign faced questions over why it did not immediately disclose he had had a heart attack. The campaign also did not release his full medical records despite pledging to do so.

Democrats said Sanders’ decision to pull out of the 2020 race now would give the party time to come together before the August nominating convention. Some Democrats blame Sanders for staying in his 2016 race against Clinton too long, hurting her general election bid against Trump.

“I think that allows more time for healing,” said Democratic operative Joel Payne, who worked for Clinton’s campaign in 2016. 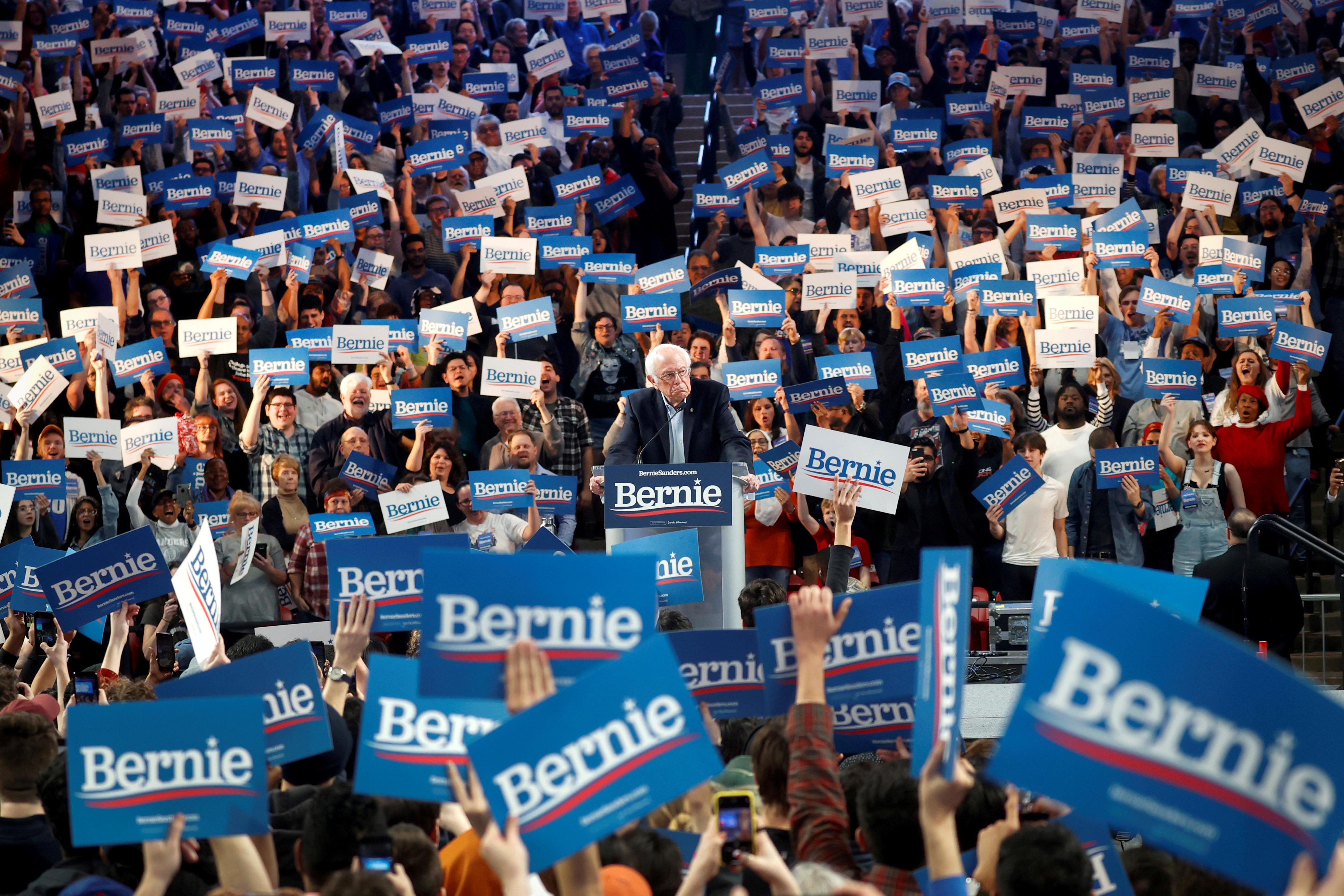 Trump, who has courted Sanders’ supporters and said the senator was treated unfairly by the Democratic Party establishment, reacted quickly on Twitter.

“This ended just like the Democrats & the DNC wanted, same as the Crooked Hillary fiasco. The Bernie people should come to the Republican Party, TRADE!” Trump wrote.

Many of Sanders’ policy positions have become part of the everyday Democratic Party debate, including his Medicare for All proposal that would create a government-run healthcare system to replace the current blend of private medical insurance and public programs. He also advocated a $15 minimum wage, tuition-free public colleges and higher taxes on the wealthy.

“It was not long ago that people considered these ideas radical and fringe. Today they are mainstream ideas, and many of them are already being implemented in cities and states across the country. That is what we have accomplished together,” Sanders said in his announcement.