Dick Thornburgh, a two-term Republican governor of Pennsylvania who coped with America’s worst nuclear power meltdown at Three Mile Island in 1979 and later served as United States attorney general under Presidents Ronald Reagan and George Bush, died on Thursday at a retirement home in Oakmont, Pa., outside Pittsburgh. He was 88.

His son David confirmed the death.

To millions of voters who elected him, to five presidents he worked for in the Justice Department, and to hundreds of organized-crime figures, white-collar criminals and corrupt public officials he prosecuted, Mr. Thornburgh was an ambitious man with a formula for success: Clean house, restore order and move on to higher office.

It worked for more than two decades. He was Richard M. Nixon’s federal prosecutor in Pittsburgh (1969 to 1975) and Gerald R. Ford’s and Jimmy Carter’s assistant attorney general in charge of the criminal division (1975 to 1977). He was the only Republican to serve two successive terms as Pennsylvania governor (1979 to 1987). And he was the attorney general who bridged the Reagan and Bush Justice Departments (1988 to 1991).

But there was no formula for dealing with a nuclear meltdown. Trained in civil engineering and the law, Mr. Thornburgh was accustomed to dealing with the cold, hard facts of sciences and statutes. But facts were hard to come by in the maelstrom of chaos and fear after the partial meltdown of a nuclear reactor at the Three Mile Island power plant near Harrisburg, Pa., on March 28, 1979. 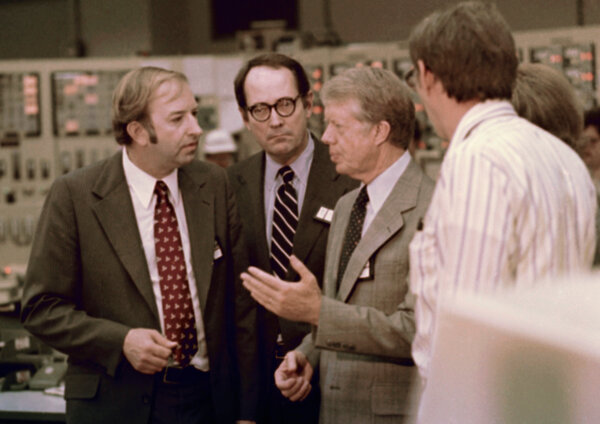 It happened 10 weeks after he became governor, and 12 days after the release of “The China Syndrome,” a Jane Fonda-Jack Lemmon film about a runaway nuclear accident, with its talk of a reactor burning all the way down through the planet to China or exploding in Southern California with a blanket of radioactivity that would “render an area the size of Pennsylvania permanently uninhabitable,” as one character put it.

Three Mile Island, 10 miles south of the State Capitol on the Susquehanna River, was no China Syndrome. Overheated nuclear fuel pellets melted, a containment was breached and leaking radiation contaminated the plant and escaped into the air. But persistent confusion over what had happened and the extent of the danger, compounded by dire warnings by antinuclear activists, left the public disconcerted.

Taking charge of the crisis, Governor Thornburgh was a calm voice against panic and made decisions that proved to be correct. He ordered a precautionary evacuation of pregnant women and young children in a five-mile radius around the plant. About 140,000 people left. And when a false report spread that the plant might blow up, he consulted experts, called reporters in and announced that no such danger existed.

“You have to reassure people,” he said. “You have to go before the cameras and microphones and tell them what you know and what you don’t. You have to stop the rumors, and, of course, you have to make decisions. There isn’t any Republican or Democratic way to deal with a nuclear crisis. Nobody has ever had to deal with this kind of accident before.”

President Carter, visiting the crippled plant five days after the accident, praised the governor’s “superlative” performance. “Because of the trust of the American people in him, and particularly those who live in this region, potential panic and disturbance has been minimized,” Mr. Carter said.

It was an impressive start on the national stage for Mr. Thornburgh, a Rockefeller moderate and a rising Republican star elected on a promise to place Pennsylvania on solid economic footing and to crack down on corruption, which had festered under a Democratic predecessor, Gov. Milton J. Shapp. (He also offered voters a catchy slogan with which to remember his name: “Thornburgh as in Pittsburgh.”)

Mr. Thornburgh balanced the budget eight straight years, eliminated 15,000 state jobs, streamlined the bureaucracy, cut taxes and state indebtedness, and left office with a $350 million surplus. He also reduced unemployment, carried out welfare reforms and pushed economic development. The private sector added 50,000 businesses and 500,000 jobs. By the end of his term, he had a 72 percent approval rating.

He taught at Harvard for a year, and in 1988, President Reagan, nearing the end of his second term, named Mr. Thornburgh to succeed Attorney General Edwin L. Meese 3rd, who had resigned under a cloud of ethics and misconduct allegations. Five months later, the newly elected President Bush retained him as attorney general, and he became the administration’s point man on criminal justice and civil rights issues.

Mr. Thornburgh diminished organized-crime strike forces around the country, arguing that federal prosecutors could do a better job. He attacked white-collar crime, winning convictions in a savings-and-loan scandal and against defense contractors, securities traders and corrupt public officials, and strengthened enforcement against drug trafficking, money laundering and terrorism.

He resigned as attorney general in 1991 to run in a special election for the unexpired term of Senator John Heinz, a Pennsylvania Republican who had been killed in a midair plane crash. Harris Wofford, a Democrat and former Pennsylvania labor secretary, had been appointed temporarily, and leading Republicans were eager for Mr. Thornburgh to win the seat back, and perhaps use it as a steppingstone to the presidency.

Mr. Thornburgh was heavily favored. But after a sluggish campaign, in which he continued to talk about being tough on crime, he lost to Mr. Wofford, a former college president and aide to John F. Kennedy, in that rarest of political rarities, an upset landslide. Mr. Wofford overcame a 47 percent Thornburgh lead in the polls and won going away, by a 56 to 44 margin of victory.

Richard Lewis Thornburgh was born in Pittsburgh on July 16, 1932, to Charles and Alice (Sanborn) Thornburgh. His father was an engineer. After graduating from Mercersburg Academy, a Pennsylvania prep school, in 1950, he earned an engineering degree from Yale in 1954 and a law degree from the University of Pittsburgh in 1957.

In 1959 he joined the Pittsburgh-based law firm of Kirkpatrick & Lockhart.

Mr. Thornburgh had married Virginia Hooten, his childhood sweetheart, in 1955 and had three sons with her, John, David and Peter. She was killed in 1960 in a car accident that left Peter permanently brain damaged. In 1963, Mr. Thornburgh married Ginny Judson, with whom he had a fourth son, William.

In addition to his son David, Mr. Thornburgh is survived by Ms. Judson; his other sons; six grandchildren; and five great-grandchildren.

For years Mr. Thornburgh and his second wife championed equal rights and opportunities for people with disabilities, a fight they joined initially on behalf of Peter. As the attorney general, Mr. Thornburgh led the Bush administration’s drive in Congress to enact the Americans With Disabilities Act of 1990, which barred discrimination against people with physical, mental and sensory disabilities.

He began his political career with an unsuccessful run for a Pittsburgh seat in the U.S. House of Representatives in 1966 and ended it 25 years later with his 1991 Senate loss to Mr. Wofford.

He served a year at the United Nations as undersecretary in charge of personnel, budget and finances, then resumed law practice where his career had begun, at what is now K & L Gates, one of the nation’s largest international law firms.

He wrote many articles and reports on litigation and public policy, and was the author of “Where the Evidence Leads: An Autobiography” (2003) and “Puerto Rico’s Future: A Time to Decide” (2007), which called for self-determination for the United States territory he described as a vestige of colonialism.