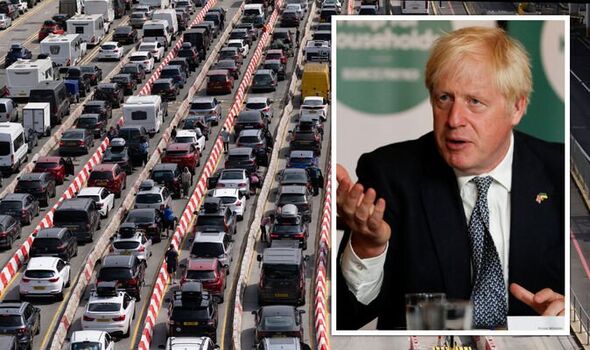 Boris Johnson’s spokesman blamed mayhem at Dover and Folkestone on “factors including a shortage of French border control staff”. The source added: “These are not scenes that we think are necessitated by leaving the European Union.”

Thousands of holidaymakers and truckers heading to the Continent queued for hours at the weekend.

After a row between the UK and French regimes over responsibility, officials were yesterday making plans to prevent more chaos next weekend.

Some 142,000 people drove via Dover last weekend but customs delays and crashes led to major hold-ups. Folkestone became the centre of problems on Sunday as Channel Tunnel users hit jams on the M20.

The Prime Minister’s spokesman said: “We understand there are changes, post-Brexit. We recognise that, we have planned for that. The problems are down to a combination of factors including a shortage of French border control staff.

“So these are not scenes that we think are necessitated by leaving the European Union. We think we have operational procedures and processes in place that do not need to see these levels of queues.”

A “critical incident” was declared at Dover as angry motorists had to wait for more than seven hours on Friday, with families forced to sleep in cars.

Tory leadership contenders Liz Truss and Rishi Sunak accused France of instigating the chaos by failing to have enough border staff in the port on the busiest weekend since the pandemic.

The Kent harbour was busy yesterday but there was no repeat of the recent severe disruption.

Toby Howe, senior county highway manager, said queues were “normal for a Monday morning” but warned next weekend is likely to be “very busy – it’s the second busiest getaway weekend of the summer holidays.

“With the increased checks it is slower to get through, so it takes very little to cause those tailbacks.”

François Decoster, vice president of the Hauts-de-France northern region which includes the key Channel port of Calais, claimed the UK had regressed 30 years due to Brexit. He said it should ask the EU if it can join the Schengen Area of free movement between 26 countries including France, Germany, Italy and Greece.

Mr Decoster said: “Brexit means we must do new controls. I have felt very sorry for the families. We like to welcome British tourists. We want them to come easily to our beautiful places.

“We have a few non-EU members who are members of Schengen, why don’t we explore such an idea?

“Next weekend will be the busiest weekend of the year and this situation cannot happen again. I don’t know if you have to stamp the passport but I regret that we have to use passports again…that should be removed.

“This is the opposite of progress. This is not what we want for Europe.”